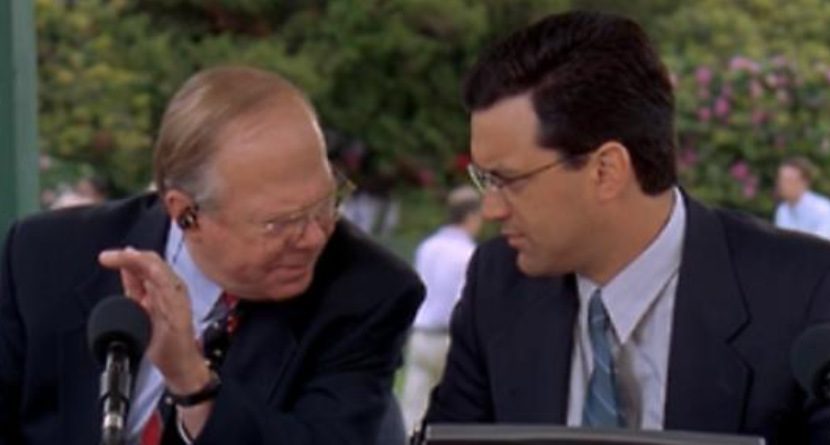 Verne Lundquist is one of the most famous sports broadcasters of all time. His decorated career includes the Olympics, NCAA Tournaments and the Masters…none of which hold a candle to his roll in the 1996 critically acclaimed feature movie Happy Gilmore.

Recently, PGA.com was contacted by Just Not Sports Podcast host Brad Burke, who offered to share some nuggets from his recent interview with Lundquist.

Here are a few snippets courtesy of PGA.com:

“I was concerned that it was such a spoof of the game of golf that the folks who were in charge at The Masters might not view it as lightly as I did. But I never, ever, ever heard a word from anyone at CBS when I went back, or Turner, or the folks who run the golf tournament. Ever a word.”

“I saw only (the script for) my scenes, so I didn’t know the first half of the movie. So when I saw it I was somewhat shocked,” Lundquist said. “They flew Nancy and me from Colorado out to the Universal lot for the premiere… We went in, sat down, and that’s the first time I’d seen the whole thing. And I thought, holy cow, this is some kind of vile movie.”

His broadcast partner was not “happy” about it

Lundquist said he caught some grief from Pat Haden, his broadcast partner at the time, for being in the movie.

“I was at a preseason game with Pat Haden, and he remains one of my dearest friends,” Lundquist said. “And Pat and I were doing the Giants and somebody, and we were down on the field. We were walking off toward the north end zone, and he said, ‘By the way, I just gotta tell you something. I am so embarrassed for you. I took my daughter to see this silly movie you were in.’ And he was giving me every bit of phony indignation he could. He said, ‘Are you at all embarrassed about being seen in a movie like that? You should be.’ And I said, ‘Oh, come on, come on, come on.’ So we get to the end zone, and there three teenage girls right above that wind tunnel at the north end of the old Giants Stadium. And as Pat and I were about to walk into the tunnel, one of the girls looks at me and she said, ‘Hey Verne, Happy Gilmore!’ And I said, ‘Pat, I rest my case.’”

If only some broadcasters today heeded this advice

Also funny was the story behind Lundquist’s broadcast partner in the movie, producer Jack Giarraputo.

Giarraputo is a longtime friend of Sandler.

“Right before we got started, (the director) looked at this tall, good-looking guy named Jack Giarraputo,” Lundquist told Just Not Sports. “And he said, ‘Jack let’s have a little fun.’ This was like a week before they wrapped shooting. He said, ‘I want you to go back to wardrobe… get a coat and tie, get some make-up on, and then you sit next to Verne. And you just react to what he’s saying, but you can’t say a word because you’re not a member of the Screen Actor’s Guild.’ So the guy sitting next to me in I think it’s almost every scene was Adam Sandler’s roommate at New York University. And it was just an inside joke.”