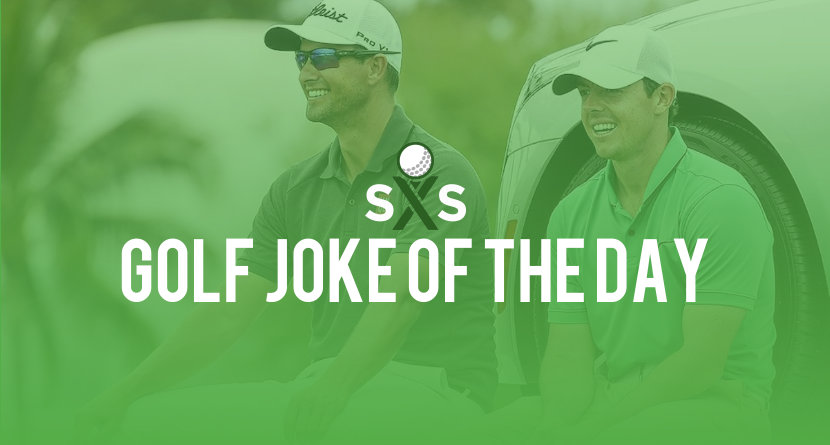 A golfer is in a competitive match with a friend who is ahead by a couple of strokes.

The golfer says to himself, “I’d give anything to sink this next putt.”

Just then, a stranger walks up to him and whispers, “Would you give up a fourth of your sex life to make the putt?”

The golfer thinks the man is crazy and that his answer will be meaningless, so he says, “Sure.”

Of course, he sinks the putt. Two holes later he mumbles to himself, “Boy, if I could only get an eagle on this hole that would put my opponent in a really tough spot.”

Again, the  stranger moves to his side and says, “Would it be worth another fourth of your sex life?”

The golfer shrugs and says, “Sure.”

A great drive, a well-struck fairway wood and a long putt later, he makes an eagle.

On the final hole, the golfer needs to make birdie to win. Though he says nothing, the stranger moves to his side and says, “Would you be willing to give up the rest of your sex life to win this match?”

The golfer, incredulous as to how this stranger could actually affect his sex life, says, “Certainly!”

Another good drive and solid iron shot later, the man is on the green with a 10-foot birdie putt. Not even worrying about what he’s giving up, the man knocks the putt in dead center.

As the golfer walks to the clubhouse, the stranger walks up alongside him again and says, “You know, I’ve really not been fair with you because you don’t know who I am,” the stranger confessed with a malicious smirk. “I’m actually the Devil. You made a deal with me and from now on, you will have no sex life.”

“Nice to meet you, Lucifer,” says the golfer. “My name is Father O’Malley.”