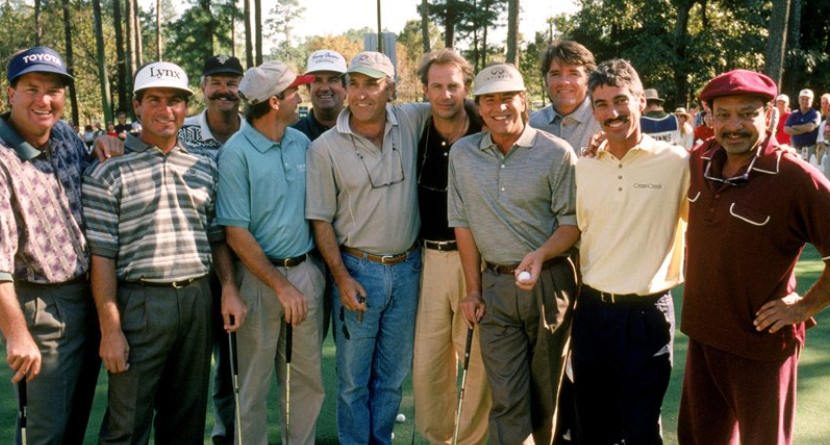 August 16 marks the 20th anniversary of one of the greatest sports movies of all time: Tin Cup.

In celebration of this milestone, Golf.com put together this fantastic “oral history” on the making of the film as told by the guys that made it.


While they’re all gems, here’s a small sampling of the shiniest:

“Let’s just write it into the script”

Shelton: A lot of actors think they’re athletes and aren’t, but Kevin’s a real athlete. I knew that from Bull Durham. And we brought in Gary McCord and Peter Kostis to work with him and Don. Every time we shot a golf scene we would fly them in. Kevin never took a swing they didn’t sign off on, and they were both surprised by how well he could mimic them. He had a short follow-through that they kept trying to make longer, and I said, “Let’s just write it into the script. Because Roy’s from West Texas and he’s used to playing in the wind, he has a short follow-through.” I knew the golf press would go after us, so I made it part of the story.

Shelton: We needed to get some professional golfers in the movie to give it a flavor of authenticity. So we started calling, and their agents wanted $50,000 for an appearance, like it was a corporate outing. We were like, “No, we’re offering them $600.” And they all said no way. Then McCord had a great idea.

McCord: I called the players’ wives and said, “How’d you like to have dinner with Kevin Costner and Don Johnson? The catch is, your husband is going to have to be on a movie set for a day.” We rented a big room in Tucson and let Kevin and Don loose on the girls. I told them, “Be Hollywood, and bulls— with these women; make them tell their husbands they have to do this movie.” In the end, we got 35 players, four U.S. Open winners—and they got SAG minimum!

Corey Pavin: I was the reigning U.S. Open champion when we shot the film, and I still get a residual check every six or eight months, for $1.80 or something.

McCord really did once knock a pelican off it’s perch

McCord: There’s a scene in the movie where Roy hits a trick shot out of the bar and knocks a pelican off a post. Well, that actually happened to me. We were in Pensacola, and me and a few other players were trapped in our condo during a rainout. We had nothing to do but gamble. That’s what we golfers do. And I see this pelican land on a post. So I said, “Hey guys, give me 10 shots and I bet I can knock that pelican off his perch from my bedroom.” So I got up to move the lamp and open the sliding glass doors. I put the ball down, and they’re all hiding behind the couch because I’m going to fire off a 4-iron in this condo. I cut it right through the door and it sails right over the pelican’s head and he flies off. Best shot I’ve ever hit.

Cheech Marin: I’ll tell you a story no one’s ever heard. We were between scenes, standing around, and someone came up with a bet. There was this really tall pine tree, and someone said to Phil Mickelson, “I bet you can’t put your shoulder against the tree, drop a ball and hit it over the tree.” The shot basically had to go straight up. Everybody threw in a hundred bucks. I think there was $1,200 in the pot. And he did it! When the ball was still in the air, Mickelson bent over, picked up the money, and put it in his pocket.

And that’s why they call him the Walrus

McCord: One day when we were shooting in Arizona, Craig Stadler got stopped in a golf cart by the cops. He’d driven it to a liquor store a mile away and got pulled over with a golf cart full of beer. We were laughing. He was like, “Well, I’m sitting around here doing nothing all day!” I get that. The cops let him go.

Norville: Stadler was fabulous. I think a rider in his contract might have called for two cases of beer—which, by the way, he shared with the crew.