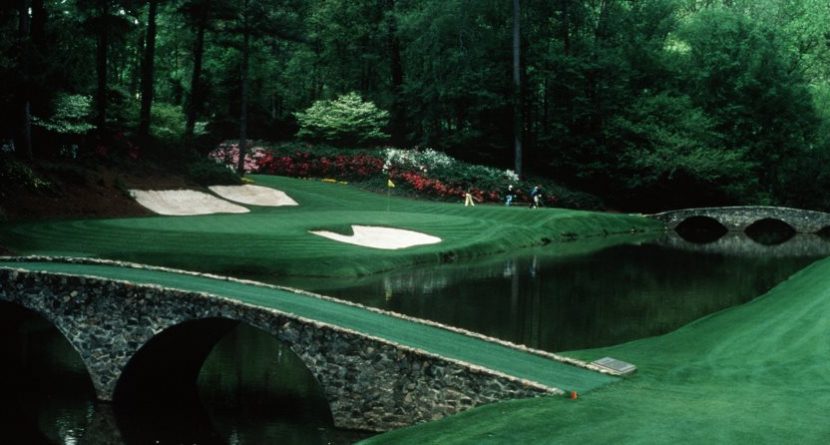 What? You didn’t realize Nos. 11, 12 and 13 at Augusta National had their own special day? Well, you’re forgiven. Today is the first Amen Corner Day, but take it in, as it won’t come around again for another 100 years.

We know – it seems as if Augusta and its rich history have been around for centuries. But on Nov. 12, 1913, the golf club and its impeccable course didn’t even exist. Augusta National opened in 1933, and the first Masters Tournament was held the next year.

It took another 24 years, however, for the demanding three-hole stretch on the back nine to earn its famed label. The year was 1958, and Herbert Warren Wind was covering the Masters for “Sports Illustrated.” This is how he opened his story:

“On the afternoon before the start of the recent Masters golf tournament, a wonderfully evocative ceremony took place at the farthest reach of the Augusta National course – down in the Amen Corner where Rae’s Creek intersects the 13th fairway near the tee, then parallels the front edge of the green on the short 12th and finally swirls alongside the 11th green. On that afternoon, with Bob Jones investing the occasion with his invariable flavor, two new bridges across the creek were officially dedicated: one (leading to the 12th green) to Ben Hogan, commemorating his record score of 274 in the 1953 tournament; the other (leading back to the fairway from the 13th tee) to Byron Nelson, commemorating his great burst in the 1937 Masters when, trailing Ralph Guldahl by four strokes on the last round, he played a birdie 2 on the 12th and an eagle 3 on the 13th, made up six strokes on Guldahl (who had taken a 5 and a 6 on these holes) and rolled on to victory.”

Hole No. 11 is a 505-yard par 4 named “White Dogwood.” It features a downhill approach to the green, which is hugged on the left by a pond, in the back by Rae’s Creek, and on the right by a bunker. You can be sure Larry Mize said “amen” a few times after chipping in on this hole to win the 1987 Masters in a playoff over Seve Ballesteros and Greg Norman.

Hole No. 12, known as “Golden Bell,” is the shortest on the course at 155 yards, but swirling winds around the green can cause headaches. Tee shots must clear Rae’s Creek and a frontside bunker, but not sail past the green into one of two more sand traps. It was on this hole during the same year Amen Corner was coined that Arnold Palmer played a provisional ball after a controversial lie, and in the end was ruled to have scored par instead of the double bogey he shot with his first ball. He went on to win his first career major by one stroke, although debate still runs today over the ruling at No. 12.

Hole No. 13 is called “Azalea” and is a 510-yard par 5 that doglegs left. It was on this hole that Palmer went for the green in two and was rewarded in ’58, then learned of his favorable ruling at No. 12 before sinking an 18-foot eagle putt. That stunning turnaround gave immediate credence to the nickname, “Amen Corner.”