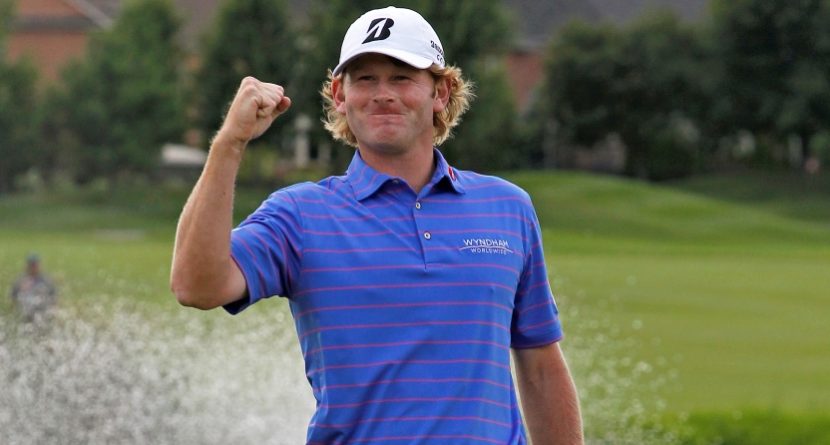 Brandt Snedeker captured his second victory of the season with some help from Hunter Mahan’s newborn, David Hearn earned a trophy for placing 44th, and Graeme McDowell learned that he needs to freshen up on the rules. Here are five notes from the weekend’s PGA Tour stop in Oakville, Ontario, for the RBC Canadian Open:

Snedeker snatches second victory of season
Largely thanks to a third-round 9-under-par 63, Brandt Snedeker collected his second win of 2013. His $1.008 million paycheck joins the $1.17 million one he earned in February by taking the AT&T Pebble Beach National Pro-Am, and gives him six PGA wins in his career. A final-round 70 earned Snedeker a three-shot triumph over four other guys, one of which was Matt Kuchar, who sits at No. 6 in the world rankings, one spot ahead of Snedeker.

Mahan is the (family) man
Snedeker took the lead for good on Saturday, soon after he noticed mid-round that Hunter Mahan’s name suddenly disappeared from the leaderboard. That’s because Mahan, the 36-hole leader, bolted back home to Dallas before he teed off Saturday upon getting word from his wife, Kandi, that she had gone into labor early with their first child. She gave birth to daughter Zoe Olivia early Sunday. “Zoe will be getting a very nice baby gift from me,” Snedeker said after his win. “I can’t thank Kandi enough for going into labor early. I don’t know if I’d be sitting here if she hadn’t.”

What a whirlwind of a day, but I’m happy to announce the birth of my daughter Zoe Olivia Mahan born at 3:26 am. Thanks for all the support!

Hearn doesn’t play well, wins award
David Hearn held high hopes for the week as a Canadian playing in his country’s open championship, and coming off a hard-fought playoff loss two weeks ago. But after three straight bogeys on the back nine on Friday, it didn’t look like he’d even make the cut. Hearn did, however, by birdieing his last three holes, the last of which came on a 47-foot putt. He turned in a 4-under 68 on Saturday, but was 1-over Sunday, dropping him into a tie for 44th. Yet, that was good enough to make him the top-placing Canadian, who receives the Rivermead Cup. Carl Keffer is the only Canadian-born champion at this event, winning in 1909 and 1914.

McDowell makes cut, then gets cut
World No. 8 Graeme McDowell stumbled out of the gates in Canada with a 76, then snuck just inside the cutline with a 65 on Friday. He reverted, though, on Saturday, turning in another 76, which earned him the axe via the “Saturday cut” rule. His performance goes down as an “MDF,” which means “made cut, didn’t finish” and comes from a PGA Tour rule that was introduced in 2008: Fields are to be cut to the lowest 70 scores, including ties, on Friday, but if more than 78 players are involved, then another cut to the lowest 70 and ties is done after Saturday’s round. McDowell wasn’t clear on that until Saturday.

Just discovered I missed the Saturday cut @RBCCanadianOpen. Didn’t know there was one. Might have changed my mindset a little? #knowtherules

I knew the Saturday cut rule existed, but I thought 78 players was okay. I guess it’s if 78 or more players make the cut the rule kicks in..

McGirt might become a Canadian
Right there with Kuchar, Dustin Johnson and Jason Bohn in second place was the relatively unknown William McGirt. He’s never won a PGA Tour event and Sunday marked the second time he’d finished runner-up. The other time was last year at… the Canadian Open. Two years, two second-place finishes in Canada for the best two performances of his career. However, he tied with just one other player in 2012, earning a $457,600 check. This year, McGirt and the others collected only $369,600.