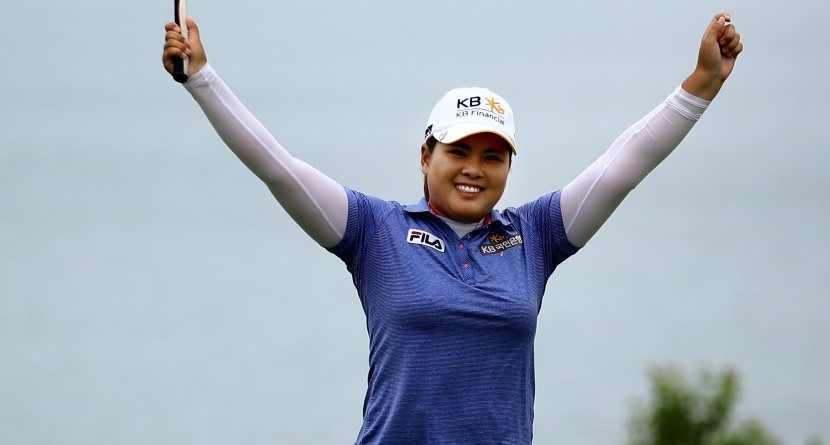 Related Links: 5 Things You Need to Know About Inbee Park | Photos of the Week

We are in the midst of golf history, and it’s not coming from the PGA Tour. Twenty-four-year-old South Korean sensation Inbee Park cruised to the U.S. Women’s Open title on Sunday, collecting her third major of the season with an 8-under 280.

If we didn’t know it already, she’s officially the best golfer playing on this planet right now. We discovered that and four other revelations from the weekend at the U.S. Women’s Open and PGA Tour’s AT&T National:

Ask any pro about being the heavy favorite to win a major golf tournament – it’s not easy to go out and actually win. But that’s what Inbee Park did Sunday, joining the great Babe Zaharias as the only women to win a season’s first three majors. Park is also the first female since Pat Bradley in 1986 to take three majors at any point in a year. In August she’ll look to become the first woman to claim four, so the Grand Slam pressure on Park only mounts as the days draw nearer to the Women’s British Open. And at this rate, what’s holding her back from winning all five? The Evian Championship in September will make 2013 the first year to offer five women’s majors. “I think the British Open is one I have to win,” Park told reporters Sunday. “So it would be great if I could win five, but I still think four means a Grand Slam. I think four out of five is very big.”

Inbee Park will go to St. Andrews @RICOHWomensBrit with chance to become first male or female to win four pro majors in a season!!!

Bill Birdies Like a Haas
Sunday for Bill Haas was one of those days we all dream of: Putts rolled around the cup and in instead of out; balls bounced back onto the green instead of off; airborne balls actually obeyed when ordering them to stay left or be right. He recorded 25 birdies over four rounds at the AT&T National and collected his first victory of the year, making him one of four guys to win at least one PGA Tour event in each of the past four seasons (joining Phil Mickelson, Dustin Johnson and Justin Rose). Recent play wouldn’t tell you that Haas was due – his missed the cut at the U.S. Open, Players Championship, and Wells Fargo Championship – but this marks his seventh top-10 finish this year, which is tied for the most on Tour and matches his career high from 2011.

Korda Means Business
Jessica Korda isn’t content just hanging around the leaders; she wants to be the leader. After playing 3-under through Friday at the U.S Open, the 20-year endured a birdie-less 5-over front nine on Saturday. So she fired her caddy. She sent Jason Gilroyed to the sidelines and called over Johnny DelPrete, her boyfriend who was last seen on the Web.com tour last year. Korda proceeded to shoot 1-under on the back nine, and 1-over on Sunday to finish tied for seventh at +2 overall. She said she would have asked her dad, Petr, to take her bag, but he was already carrying for Jessica’s younger sister Nelly, the youngest player in the field at 14 years old. Nelly made the cut but tied for 64th at +22.

.@JessicaKorda and @TheNellyKorda are the 1st sisters to both make the cut at a #uswomensopen since @ANNIKA59 & Charlotta Sorenstam in 2002.

I.K. Kim Might Be the Female Phil Mickelson
That can be a good thing because it means the South Korean is on her way to win a few majors. But right now it means she’s better at coming close. Kim finished 4-under Sunday, three strokes better than her nearest foe – but four strokes behind Park. The runner-up finish marked Kim’s fourth top-four result at a U.S. Open, and goes with an excruciating second-place at last year’s Kraft Nabisco Championship, when she fluffed a short putt on the 72nd hole that would have handed her the title, then lost in a playoff. She has also tied for third at the British Open and tied for fifth at the LPGA Championship.

Natalie Gulbis is Not Back Just Yet
The beauty queen of golf contracted malaria earlier in February and though she returned in early April for the Nabisco Championship, she said she didn’t feel completely back to normal until early June. Her game looked back to normal Thursday when she carded a 2-under 70, which tied for ninth at four shots back. But a 78 and 76 the next two days took her well out of contention, and her 84 on Sunday was the highest score of the weekend.