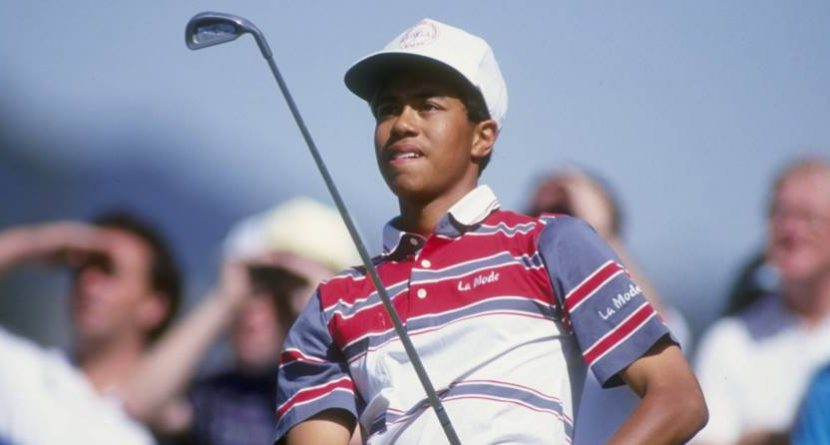 Back at Riviera Country Club in Los Angeles for the Northern Trust Open, the PGA Tour returns to one of the most picturesque and historic sites in all of golf. Take a look back at the nine greatest golf moments at Riviera:

1948 U.S. Open: Ben Hogan owns the place
After triumphing at the 1947 and ’48 Los Angeles Opens, the legendary Ben Hogan returned to Riviera in the summer of 1948 to win for a third straight time on the course in the U.S. Open. It was dubbed “Hogan’s Alley” thereafter. His 8-under-par 276 set a U.S. Open record at the time, and that event marked the first U.S. Open played on the West Coast.

1983 PGA Championship: Hal Sutton holds on
Hal Sutton led by as many as five shots in the final round of 1983 PGA Championship, but then carded three straight bogeys on Nos. 12-14. Meanwhile, Jack Nicklaus was up ahead knocking in birdies at 14 and 16 to pull within a shot. But Sutton steadied and edged the Golden Bear to collect his first and only major title. 1985 Los Angeles Open: Lanny Wadkins crushes course record
The 1979 L.A. Open winner, Lanny Wadkins emphatically grabbed a second win at Riviera in 1985. He essentially put the tournament away with an eagle on the ninth hole of his final round, and he finished with an incredible 20-under 264, a record that still stands today.

1992 Nissan Open: Tiger Woods debuts
Tiger Woods has played in 310 PGA Tour events. His very first was as an amateur at the 1992 Nissan Open at Riviera. Just a high school sophomore and not quite two months past his 16th birthday, he became the youngest golfer at that time to play in a PGA Tour event. Woods missed the cut at 5-over-par after two rounds, and has never won at Riviera.

1995 PGA Championship: Steve Elkington never gives up
Many people figured Ernie Els would collect his second major as he carded a tournament-record 197 after three rounds of the 1995 PGA Championship, and held a three-shot edge going into Sunday. Few figured Steve Elkington could pull it off from six shots back. But that’s precisely what happened. Elkington shot a 7-under 64 in the final round to edge Els by two shots, and take part in a playoff with Colin Montgomerie. Elkington’s 20-foot birdie putt on the first playoff hole gave him his first and only major.

2007 Nissan Open: Rich Beem jumps on his new car
In 1994, Peter Jacobsen aced the par-3 14th hole at Riviera and immediately hopped in the nearby Nissan 300ZX he won for the hole-in-one. Rich Beem remembered that moment when he sank his tee shot on the same hole in 2007, and reenacted it, climbing atop and hugging the Nissan Altima he won. Beem’s moment later became a commercial.

2009 Northern Trust Open: First Charlie Sifford Exemption
The Northern Trust Open Exemption is nicknamed the Charlie Sifford Exemption because it is annually given to a player who represents the advancement of diversity in golf. Sifford is credited with helping to end the PGA Tour’s Caucasian-only clause in 1961, and in 1969, he won his second and final PGA Tour title at that year’s L.A. Open. The first such exemption was given to Vincent Johnson in 2009, allowing him to make his PGA Tour debut, and went to Harold Varner III this year.

2013 Northern Trust Open: Fred Couples makes record appearance
The venerable Fred Couples appeared in his 31st non-major event at Riviera in 2013, setting a tournament record. He claimed titles in 1990 and ’92 and was runner-up three more times in ’93, ’94 and ’96. Couples, now 54, even contended at Riviera as late as 2011, when he owned the lead after two rounds and was in contention in the final round before faltering late.

2013 Northern Trust Open: John Merrick wins hometown tourney
Born and raised in south Los Angeles County, in Long Beach, John Merrick attended UCLA, which counts Riviera among its home courses. He still lives in Long Beach, so only makes a quick (depending on traffic) drive up the 405 to play Riviera. Last year, Merrick became the first Los Angeles County native to win the event in its 87-year history, defeating Charlie Beljan in a two-hole playoff.