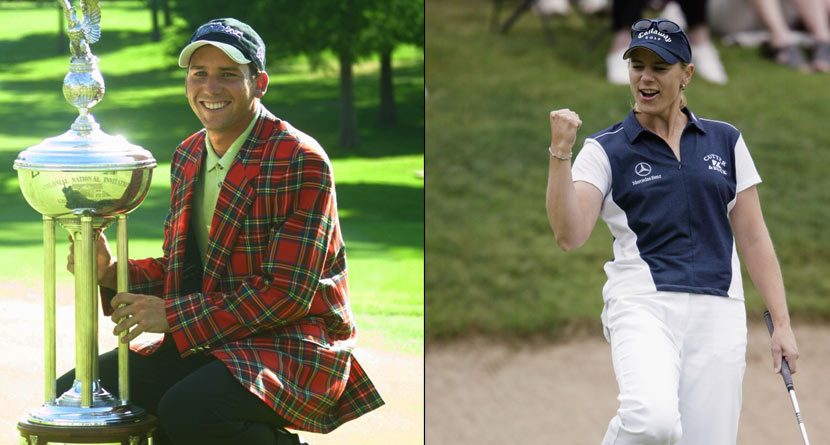 The Crowne Plaza Invitational at Colonial Country Club in Fort Worth, Texas, is one of the most important events on the PGA Tour for a number of reasons. Perhaps that is thanks to the incredible history of the event and the indelible mark that Ben Hogan left on it, starting with his first two wins here in 1946 and ’47.

Since then, the name may have changed, but the Invitational at Colonial has provided countless memories and some pretty cool traditions. Here’s a look at the best of Colonial Country Club:

Craig Wood wins 1941 U.S. Open at Colonial – In 1941, the U.S. Open came to Colonial, bringing acclaim to the course for the first time. Craig Wood won that event by three strokes over Denny Shute, Johnny Bulla and some guy named Ben Hogan. Since then, the course has hosted the Invitational starting in 1946, the 1975 Players Championship and the 1991 U.S. Women’s Open.

Annika Sorenstam tees it up with the boys in 2003 – No one can forget the 2003 Invitational at Colonial thanks in large part to Annika Sorenstam. At the time, she had already collected 43 wins on the LPGA Tour, including four major titles. Sorenstam shot 71-74 and missed the cut, but made history as the first woman to start on the PGA Tour since Babe Zaharias in 1945.

Ian Baker-Finch takes his pants off – One of the more odd yet memorable moments came thanks to Ian Baker-Finch. During the 1993 Invitational, he hit his ball into the water on 13 but still had a shot. He was also wearing pants that he didn’t want to get wet (scroll to the 33-second mark):

As Baker-Finch said in the video, he may have pulled off the shot along with his pants, but he was distracted over the next couple of holes by some all of a sudden, very interested female fans, and bogeyed three of his next four holes.

Sergio Garcia collects first PGA Tour win – Sergio Garcia had already won twice on the European Tour and had been a professional for three years when he picked up his first PGA Tour win at the Invitational at Colonial in 2001. Garcia donned the customary plaid jacket following an excellent week of golf that culminated in a two-shot win over Brian Gay.

Tom Watson becomes Invitational’s oldest winner in 1998 – Tom Watson had been wowing golf fans long before he claimed his final win on the PGA Tour at Colonial in 1998. With the help of a magnificent birdie on the ninth hole, Watson became the oldest winner in the tournament’s history. It was also the 39th win of his career.

Ben Hogan wins five times – There are a few reasons why Colonial Country Club is synonymous with Ben Hogan, most notably because he called it home. Coming from Texas and residing in Fort Worth, the Invitational at Colonial was important to him. Hogan won the inaugural tournament in 1946 and again the following year in 1947. He again won the tournament back to back in 1952 and as part of his “Hogan Slam” in 1953. Six years removed from his last win on the PGA Tour, Hogan added one last victory to his career total, his fifth at Colonial, in 1959.

Phil’s birdie to win in 2008 – Over the course of his illustrious career, Phil Mickelson has given us much to cheer about. In 2008 at Colonial, Mickelson over came an error off the tee on the final hole to win his second plaid jacket at the Invitational. His perfect wedge over the trees on 18 left him eight feet to seal the deal, which he did, leaving most wondering how he does it time and time again.

Wall of Champions – One of the more unique features of Colonial Country Club is the Wall of Champions on the first tee. The wall, as the name suggests, commemorates all the winners at the course, dating back to Craig Wood at the 1941 U.S. Open.

Champion’s Choice – Of all the things that make the Crowne Plaza Invitational and Colonial Country Club great, perhaps the coolest is a tradition called “Champion’s Choice,” which is where past champions choose two players who would not otherwise have been eligible to play in the event. Names like Al Geiberger (first man to shoot 59 in PGA competition) and major champions Paul Azinger, Tom Weiskopf, Craig Stadler, Curtis Strange, Davis Love III and Dave Stockton have all previously played in the Invitational as Champion’s Choices.

This year, the two players chosen were Kevin Tway, son of PGA champion Bob Tway, and Jeff Curl, who currently stars on the Web.com Tour. Curl will be joined in the event this week by his father, Rod, the 1974 winner of this event.