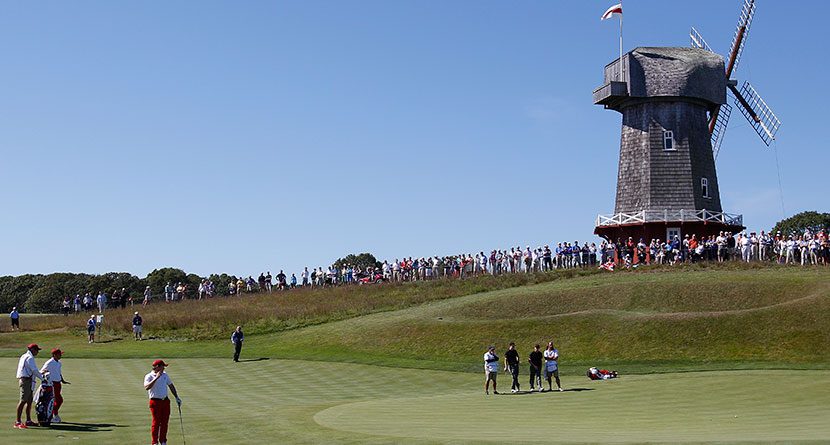 News broke recently that the exclusive Los Angeles Country Club plans to host the 2023 U.S. Open. The country club and the USGA are in preliminary agreement for the event to be held at the club’s North Course and if all goes as planned, it will be the first Open held in the city since 1948, which was won by Ben Hogan at Riviera Country Club.

Los Angeles Country Club is among the game’s most exclusive and private. Only members and those lucky enough to know one have first-hand knowledge what the grounds at the George C. Thomas beauty look like.

As we begin to formulate a plot to see the hallowed grounds for ourselves, we also began to devise the below list of the 9 ultra-exclusive clubs — made so either by access or geography — we’d love to see host a major event:

Pine Valley Golf Club – Clementon, N.J.
Located 20 minutes from Philadelphia and secluded deep in the woods, Pine Valley Golf Club is a fixture at or near the top of nearly all annual “top courses” lists. Stretching 7,009 yards from the back tees, it’s a course where accessibility is surpassed only by its difficulty. It’s no surprise Pine Valley features “Hell’s Half Acre” (a bunker on the par-5 7th hole once recognized as the world’s largest) and a pot bunker on the par-3 10th called the “Devil’s Asshole.” If you want to play here, however, you’d better know someone who knows someone and bring your Tums. Seminole Golf Club – Juno Beach, Fla.
Noted by many to be famed architect Donald Ross’ masterpiece, Seminole Golf Club is a course most can only dream of playing. Ben Hogan once said of the place, “if you can play Seminole, you can play any course in the world.” Just over 6,800 yards from the tips, Seminole is an ultimate test of golf – and an ultimate golf destination for any purist. Cape Kidnappers – New Zealand
Perhaps the course on this list with the most jaw-dropping and dramatic views, Cape Kidnappers requires a bit of travel and money to get to, but judging by the views alone, it’s well worth the fee. Can you imagine the likes of Tiger Woods and Rory McIlroy contending with the breathtaking scenery of New Zealand as a backdrop? Cypress Point – Pebble Beach, Calif.
Arguably the most dreamt about course in the world besides Augusta National is Cypress Point. Even more exclusive than Pebble Beach, Cypress Point is hailed as architect Alister MacKenzie’s masterpiece. Without being dauntingly long, the course is still as demanding as it is scenic. Until 1991, it was one of the regular courses used during the AT&T Pebble Beach National Pro-Am but we’d love to see an event — a major, perhaps? — return to Cypress. Prairie Dunes Country Club – Hutchison, Kan.
A USGA favorite, Prairie Dunes has yet to host a PGA Tour event or a major but we’d surely like to see it. Designed by Perry Maxwell in 1937, Prairie Dunes is perennially ranked among the nation’s best and has held up against many a top field thanks to it’s natural layout and windy conditions. Barnbougle – Tasmania
Barnbougle has two courses we’d simply love to see the pros at. Due to its locale, though, we’re unlikely to see the game’s best tee it up on one of the two courses on property — the Tom Doak and Mike Clayton-designed Dunes Course and Lost Farm designed by Bill Coore and Ben Crenshaw. I guess we’ll just have to settle for stunning images like these. National Golf Links of America – Southampton, New York
Located on the scenic Peconic Bay in Southampton, N.Y., National Golf Links of America provides one of the most breathtaking – and exclusive – golf experiences in the world. Once called “America’s snootiest golf club.” The course has never hosted a PGA Tour event (and probably never will), but was the host of the inaugural Walker Cup event in 1922 and again in 2013. Other Hot Links:– 11 Most Memorable Ryder Cup Moments– Performance Friday: PGA Professional Tim Johnson– Best Crowd Moments In Ryder Cup History– The Lion Sings Tonight: John Daly Hits It Hard In His Car– What Do Dufner and A Smurf Have In Common With Auburn Football?– The Fringe: Getting Pumped Up For The Ryder Cup– 5 Players Team Europe Needs To Play Well At Ryder Cup– Tiger Woods: ‘I May Just Do It On My Own’– Royal & Ancient Votes To Allow Female Members