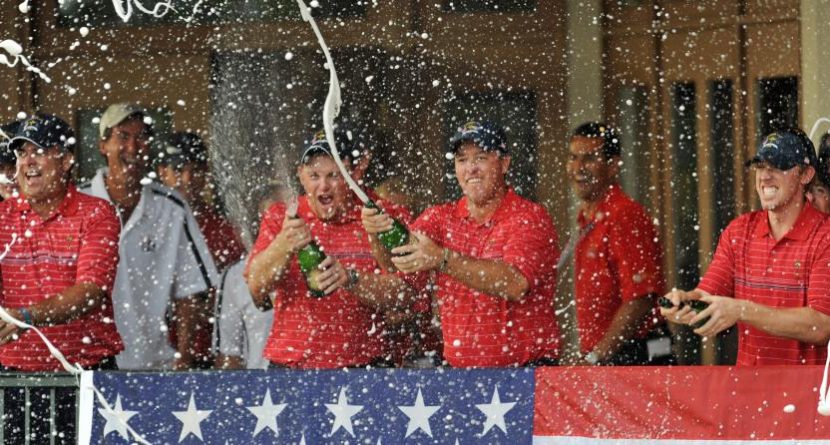 The 2014 season’s fourth and final major tees off Thursday, as the PGA Championship takes over Valhalla Golf Club in Louisville, Ky., for the third time. The previous two major championships on the course produced some memorable moments, but so did a few other big-time events.

Here’s a look at Valhalla’s 9 most memorable moments:

U.S. takes back Ryder Cup
Tensions were high as the Ryder Cup descended on Valhalla in 2008. The Europeans had won three in a row, and the previous two were by huge nine-point margins. Despite playing on friendly soil, the Americans were without their best player, Tiger Woods, and half of their team was made up of Ryder Cup rookies. No matter. The U.S. won every single session, and took the overall match 16.5-11.5, its largest margin of victory since 1981.

Tiger Woods points putt into cup
The 24-year-old entered the 2000 PGA Championship at Valhalla having already won that year’s U.S. Open and Open Championship, and he needed a clutch six-foot birdie putt at 18 to force a playoff with Bob May. Then on the first playoff hole, with May’s ball sitting a foot away for par, Woods rolled in a 20-footer, walking briskly and pointing at his ball as it traveled the last few inches. He’d go on to win the playoff, and win the Masters the next year to claim the “Tiger Slam,” holding all four major championships at one time.

Mark Brooks emerges as 1996 PGA champ
The first major championship held at Valhalla, the 1996 PGA Championship, featured a number of tantalizing storylines, but none of them included Mark Brooks winning – until he did. Kentuckian Kenny Perry held the lead after 18 holes, putting him in position to claim his first major. Rising star Phil Mickelson was in front entering the weekend, possibly en route to his first major. Then another Kentucky native, Russ Cochran, shot a course-record 65 on Saturday to take the 54-hole lead. But with a birdie on the 72nd hole, Brooks dropped to 11-under and forced a playoff with Perry. Brooks then went right back down 18 and birdied it again – while Perry made a mess of the hole – to claim his first and only major championship.

Jack passes the torch to Tiger
When Jack Nicklaus decided it was time to leave the PGA Championship to all the golfers who watched him as they learned the game, the 2000 PGA at Valhalla seemed the perfect place. After all, he designed the course. So tournament officials paired him with Tiger Woods for the first two rounds – the greatest golfer of all time with the golfer who seemed destined to one day take over that title. Woods may have been the favorite to win, but Nicklaus was the favorite among the fans. And the 60-year-old nearly joined Woods on the weekend, missing an eagle with a pitch shot on No. 18 by mere inches, coming up just one shot shy of making the cut.

Tom Watson claims another major
At 61, Tom Watson entered the 2011 Senior PGA Championship at Valhalla knowing full well that that his best days were behind him. But he was wrong. He still had some good days in front of him, posting three rounds of 2-under 70 and a third-round 4-under 68. He beat David Eger in a playoff to collect his sixth major on the senior circuit, and what would be his last. The win made Watson the oldest to win a senior major since the tour started in 1980. Kenny Perry gets some redemption
After giving away what might have been his best chance ever at winning a major – the 1996 PGA at Valhalla – Perry was determined to make the 2008 U.S. Ryder Cup team, so he could once again compete on the course in front of friends and family. At 48 years young, Perry won three times in two months to secure a spot on the squad. Then he went 2-1-1 in his four matches, including a 3 and 2 win over Henrik Stenson in Sunday singles. That marked Perry’s final Ryder Cup appearance. Ken Green competes with prosthetic leg
Two weeks after competing in the 2009 Senior PGA Championship, Ken Green lost his lower right leg in a car accident. His girlfriend, brother and dog did not survive. But two years later, Green was back and took to the Valhalla course for the 2011 Senior PGA with a prosthetic limb. He was granted use of a golf cart, and officials believe he was the first amputee to compete in a Senior PGA Championship. He shot 18 over par in his two rounds, but won over thousands of fans. Hale Irwin grabs final senior major
Hale Irwin might be the greatest golfer to ever tear up the senior circuit, as evidenced by his place on the Champions Tour’s all-time money list: No. 1 with $26,884,166. Among his 45 senior wins – seven of which were majors – was a triumph at Valhalla in the 2004 Senior PGA Championship. Irwin beat Jay Haas by a stroke for the final major championship of his career. Boo Weekly does ‘Bull Dance’ off the tee
The 2008 Ryder Cup remains the last time the U.S. has won the event, so memories on this side of the pond tend to float back to Valhalla instead of the past two editions of the showdown. And one of the lasting images of that victory was a goofy Boo Weekley doing the “Happy Gilmore” bull dance off the first tee of his Sunday singles match. It fired up the crowd, which later saw Weekley beat Oliver Wilson 4 and 2.