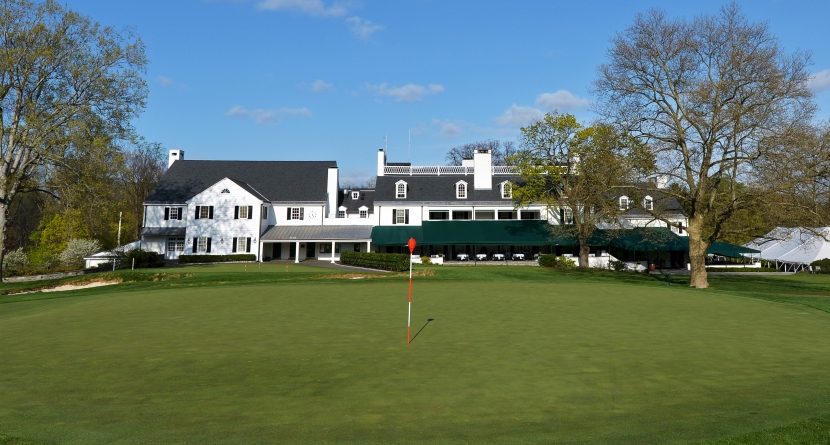 The U.S. Open is a golf tournament steeped in history. Nicklaus and Palmer in 1962 at Oakmont. Zoeller and Norman in ’84 at Winged Foot. Tiger at Pebble Beach in 2000. Tiger and Rocco at Torrey Pines in 2008.

And that’s not to mention the U.S. Opens at Merion Golf Club, which hosts its fifth U.S. Open this week, joining six other courses to have put on the United States Golf Association’s premier event on at least five occasions.

Merion oozes with history, via the U.S. Open and otherwise. When this week is all said and done, Merion will have hosted 18 USGA championships, a record (five Opens, six Amateurs, four Women’s Amateurs, the 1954 Curtis Cup, the 1998 Girls’ Junior, and the 2009 Walker Cup).

A look back at some of Merion’s highlights:

1865 – The Merion Cricket Club is founded in Haverford, Pa.

1896 – The Merion Cricket Club opens a golf course, essentially the birth of the Merion Golf Club.

1910 – Advances in golf ball technology make the club realize its course is too small, so the Merion Cricket Club Golf Committee hires Hugh Wilson to create a new golf course. The club purchases 126 acres of land in Ardmore, Pa.

1912 – Wilson reportedly spends a few weeks in the British Isles, and the courses he views overseas serve as inspiration for the one he is designing back home.

1912 – Merion’s East Course opens on Sept. 14, two days after the original Merion course in Haverford is closed for good.

1915 – The first reports surface of Merion using wicker baskets instead of flag sticks. The unique idea may have been sparked by Wilson, but course superintendent William Flynn is the one to receive a patent approval for a wicker basket design.

1916 – Wicker baskets become a popular topic at the 1916 U.S. Amateur, the first major golf tournament hosted at Merion. A 14-year-old named Robert “Bobby” Jones makes his first national appearance, but the tournament is won by Charles “Chick” Evans, who would also win the U.S. Open that year.

1930 – Yet again, Merion hosts the U.S. Amateur, and yet again, Jones emerges victorious. This victory, however, completes the “Grand Slam” of golf as it was known at the time. Jones entered the tournament already having won the U.S. and British Opens as well as the British Amateur.

1934 – Merion hosts its first U.S. Open, and Olin Dutra collects the trophy despite trailing by eight strokes after 36 holes. He made up the difference on the final day (when the last two rounds were played on Saturdays), eclipsing Gene Sarazen by one shot.

1942 – The golf club separates from the cricket club, establishing the Merion Golf Club.

1950 – The U.S. Open returns to Merion and witnesses Ben Hogan’s iconic shot on 18. Just 16 months removed from a near-fatal car accident, Hogan plays through pain in his first tournament back, and crushes a 1-iron from 213 yards out on the last hole. The second shot lands on the green, he two-putts for par to join a playoff with Lloyd Mangrum and George Fazio, then Hogan wins it by four strokes the next day. A plaque now sits in the 18th fairway to commemorate the spot from which Hogan hit the shot.

1971 – Back for a third time, the U.S. Open produces another playoff, this time between Jack Nicklaus and Lee Trevino. To ease the tension prior to the 18-hole playoff on Monday, Trevino pulls out a rubber snake from his bag and arouses laughter from the crowd – and even from Nicklaus after Trevino tossed the toy next to his foe. Trevino’s play was as good as his prank that day, as he won his second U.S. Open by three shots.

1981 – Merion’s fourth U.S. Open sees David Graham become the first Australian to win the tournament, as he bests George Burns and Bill Rogers by three shots. Burns led the Aussie by three as the final round began, but Graham’s accuracy couldn’t be matched – he missed only one fairway all day en route to a 67.

1999 – Tom Marzolf and Tom Fazio begin working to lengthen the East Course. Few expected a major tournament to return to Merion because of its short length and location within a neighborhood. But a course that played 6,544 yards for the 1981 Open is now at 6,996 yards.

2005 – The 2005 U.S. Amateur returns to Merion for the sixth time and serves as the first large-scale tournament on the longer version of the course.

2006 – The United States Golf Association votes to bring its signature event back to Merion for the fifth time.

2009 – Top amateur golfers from the U.S. and Great Britain descend on Merion for the Walker Cup, won by the Americans. They are led by a 20-year-old named Rickie Fowler, who goes 4-0 in the event.

Next Page: What It Takes To Win At Merion