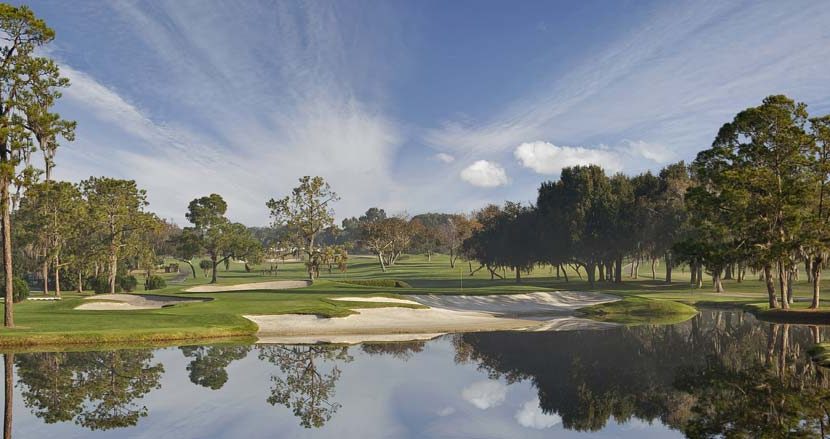 Palmer formally purchased Bay Hill in 1976, six years after he and several partners assumed control from the Nashville investors who began developing the Florida golf resort in 1960.

Palmer continues to tweak and strengthen the layout, which opened in 1961 and hosts the PGA Tour’s annual Arnold Palmer Invitational, and the King still spends his winters there. In fact, I’ve played the course on three separate winter occasions and have spotted Palmer each time chatting with guests of the 70-room Lodge, who can play the resort’s 27 holes (tee times on Saturdays are available only after noon), including the Challenger/Champion combination 18 used in the tour event.

The Lodge, incidentally, also features a luxurious spa, salon and fitness center, a pool and tennis courts, and three restaurants. The most-famous amenity — the 7,381-yard, par-72 course — ain’t too bad, either. It will test your patience, as the ever-present wind and lots of water result in a course rating/slope of 75.1/139.

The 555-yard sixth hole has a narrow, horseshoe-shaped fairway that curves left all the way around a lake to a long, narrow green. During the 1998 tournament, John Daly soaked six futile “Tin Cup” attempts to bypass the fairway and drive the green, carding an 18.

The three finishing holes can also wreak havoc to a scorecard. The 511-yard, par-5 16th requires a drive far enough left for a chance to reach the green in two. The approach must avoid water front and left of the green, and three bunkers guarding the putting surface. I sank a long birdie putt after laying up the first time I played Bay Hill, then double-bogeyed the hole twice while going for the green in two.

All it takes to conquer the exacting 221-yard 17th is an all-carry shot from an elevated tee to a green surrounded by water on three sides while bunkers flank the left and front. The King toughened the hole by expanding the long beach bunker during a 2009 course renovation.

The intimidating 458-yard closing hole has produced many unforgettable tour finishes. A large right-hand lake takes a bite out of the wide fairway 135 yards from the center of the kidney-shaped green, whose surface tilts downhill from three rear fairway bunkers toward the rocks separating the putting surface from the lake.

You won’t be handed a huge cardboard check upon putting out, but don’t be surprised if the King cruises by in a cart checking on his kingdom.

Want to check Bay Hill off your bucket list?

Or maybe you would like to live there instead?