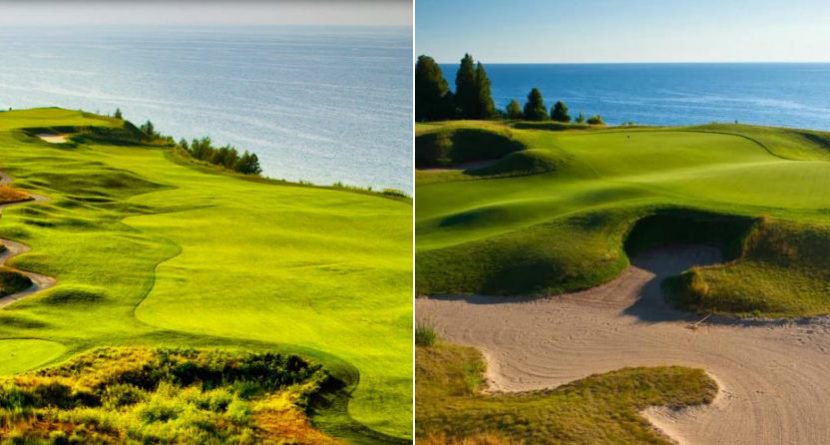 Earlier this month we put up an innocuous post on the Back9Network Facebook page: “My favorite public golf course is _________________. Fill in the blank now!” The responses were many, varied, and quite interesting.

Naturally, we inquired to know more. “We have an ongoing debate on which course is better,” Hart messaged to us. Within minutes, Pinter chimed back in, “Outside of 4-5 holes, I am not a huge fan of Bay Harbor.” Hart couldn’t resist another jab: “Don’t hate ’cause you got the shanks on #6. Lol.”

That’s it, we decided. These fellas are getting a phone call from us. And we quickly learned that the cyber smack talk on our Facebook page only scratched the surface of their friendly dispute. “My best friend is (Chuck’s) brother-in-law,” says Hart, a 34-year-old consultant for a medial waste company in Chicago. “It just so happened that – I think I was about 18 – I was at my friend’s house, and this guy comes over to take his older sister out on a date. So we were sitting around, going to go try to razz him a little bit. Started talking to him and we just started talking about golf.”

No scare tactics were deployed, and rather, a lifelong friendship over golf was built. Hart and Pinter went out and played a round of golf that next week, and now, some 15 years later, they estimate that they’ve golfed nearly 100 times together.

Says Hart, “I used to live in metro Detroit, where he lives, and we would play after work, once or twice a week and on the weekends. But after graduate school I moved out to Chicago, so now it’s limited to if he’s in town for work. Like we played Cog Hill this summer when he came in for work. I went back (to Michigan) once this summer and we went out and played. So whenever we get a chance.”

“I’ve gone to see him more times in Chicago than my own brother-in-law has,” says Pinter, a 38-year-old who works in Detroit for the Ford Motor Company Environmental Quality Office, “and they went to high school together, they went to college together, they lived together in college, they were the best man in each other’s weddings. And I’ve been to Chicago more times than he has.”

When they’re not golfing together, they make sure to let the other one know how they’re preparing for their next battle.

“We’re always online or texting each other, taking pictures of scorecards, ‘Look what I shot here,’ things like that,” Pinter says. “Giving each other the once-over because he shot a 90 and I shot an 85 or something like that.

“But that’s the other thing, too – when we play, we are usually no more than two or three shots apart, unless someone is really hot or really awful that day. It almost always comes down to the last hole or second-to-last hole before someone wins.” Every year, Pinter organizes a golf outing with about 20 guys, and before long, his wife’s brother’s friend made the cut. The group has visited some nice courses, so Pinter and Hart have a healthy foundation on which to compare their favorites.

They played Bay Harbor Golf Club in Bay Harbor, Mich., last year, a club that sits right on Lake Michigan. It consists of 27 holes, but the popular 18 to play are the nine holes they call the Links (which run along a rocky coastline of 140-foot cliffs) and the nine that make up the Quarry (situated on an old abandoned shale quarry). Both Pinter and Hart have golfed there twice, which was ample time for Hart to declare it his favorite.

“The thing that’s nice about Bay Harbor is it’s been called the Pebble Beach of the Midwest, and that cannot be more accurate,” Hart says. “It’s got a true Pebble Beach feel to it, where one hole you’re teeing off and you’re right on the coast of Lake Michigan, and the next hole you’re going back up into the woods. You’re still close to the lake but you’ve got a feel of being up north and out in the wilderness.

“And the Quarry is the back nine there – the ninth hole of the Quarry could be the best finishing hole in golf I think I’ve ever played. It’s cut right along Lake Michigan on a cliff and it goes right down to the clubhouse just sitting up on the right of the green, and you have a long approach shot in for a birdie. On a sunny day, it’s an absolutely gorgeous, perfect way to end a round of golf.”

Pinter doesn’t necessarily disagree, he just much prefers Arcadia Bluffs, which is two hours south of Bay Harbor, but also right on Lake Michigan. One of the site’s features are short flagsticks because the wind can whip in so hard off the lake. He’s played the course five times, one of which was with Hart.

“You’ve got a view of Lake Michigan from every hole,” Pinter says about Arcadia. “And in Michigan here, especially up in Northern Michigan, everything is hardwoods. You’re hitting through hardwoods, you’re hitting around hardwoods, just really good topography, but you’re hitting through the trees, around the trees, things like that. Arcadia Bluffs is a links course. There’s one tree on the entire property that comes into play. I’ve never been to Ireland, I’ve only seen it on TV, but everyone says it has the best courses you’re going to get. But I love (Arcadia) because of that uniqueness… Both Bay Harbor and Arcadia Bluffs sound and look like amazing courses. But which one is better? It’s a debate that Pinter and Hart have waged for years, with no agreement on the horizon. So we threw the question out to golf.swingbyswing.com’s editorial staff. After taking into account Pinter’s and Hart’s comments and reading up on the courses, here are the votes:

Jon Ackerman: I have to go with Arcadia Bluffs. Bay Harbor looks amazing, and any course that can be compared to Pebble Beach earns acclaim in my book. But I’m always a fan of unique courses. A golf course with no trees (that helps my game) in the middle of land that otherwise is pretty much a dense forest? Sign me up.

Adam Fonseca: My vote goes to Arcadia. Folks from Chicago take trips to that track annually, many times during the year. It’s a bit of a legend that’s talked about in clubs around the Chicago area (where Fonseca resides). I need to get out there once. Soon.

Matthew Castonguay: I’d take Bay Harbor. I really like the comparison to Pebble Beach – that’s kind of what I thought of when I saw pictures. Of course, none of the images were as dramatic, but they all seemed to provide a stunning aesthetic without the use of water on every hole. The three courses offer a variety of challenges without leaving the property.

Ryan Cortese: I’m definitely going with Bay Harbor. I love how it has the feel of both Pebble Beach and the Midwest in it. While some of the holes have severe consequences if you don’t play it smart, I think it sets up great for the average amateur golfer. The views look absolutely incredible there as well.

Tied at two votes apiece, we turn to the boss, Shawn Schrager, a man of few words who breaks the tie: Bay Harbor.