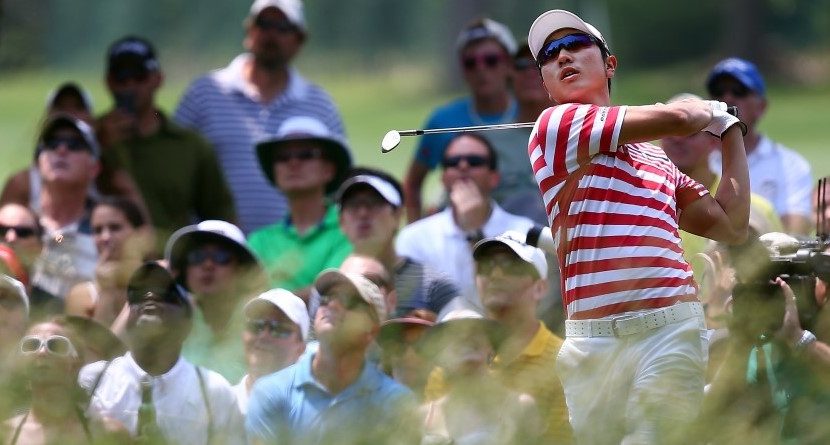 Many of the game’s biggest names took the weekend off, opening up the door for a new guy in the HP Byron Nelson Championship at TPC Four Seasons Resort in Irving, Tx. South Korea’s Sang-Moon Bae stepped through, holding off American Keegan Bradley and South Africa’s Charl Schwartzel.

Here are three things we learned this weekend:

2013 Is A Good Year For First-Timers
Through 21 events thus far on the PGA Tour, eight have seen first-time winners. Bae joined the club after shooting a 66 on Thursday, Friday and Saturday, then a 69 on Sunday. With the victory he pocketed a $1.2 million check, or more than he earned in all of his rookie season in 2012. Bae joins Russell Henley (Sony Open), John Merrick (Northern Trust Open), Michael Thompson (Honda Classic), Scott Brown (Puerto Rico Open), Kevin Streelman (Tampa Bay Championship), Billy Horschel (Zurich Classic) and Derek Ernst (Wells Fargo Championship) as first-time PGA champs in 2013.

Sang-Moon Bae Is Serious About A Career In The U.S.
He obviously speaks Korean well, and in 2011 he became fluent in Japanese. That helped a ton when he frequented the Japan Tour. Now that he’s earned his place on the PGA Tour, he’s become nearly fluent in English, conducting all interviews sans translator. Bae moved to the States in January 2012, then played 25 events and twice finished in the top 10 — tied for second after a playoff loss at the 2012 Transitions Championship; tied for fifth at the World Golf Championships-Accenture Match Play Championship after falling to world No. 1 Rory McIlroy in the quarterfinals. His best finish this year before Sunday was a T8 at the Northern Trust Open.

Golf Can Be A Cruel Game
Well, we already knew this prior to the weekend – who doesn’t? – but the point was driven home Sunday. Keegan Bradley shot a course-record 60 on Thursday and led the tournament for three days. Then he shot 2-over-par on Sunday and lost to Bae by two strokes. Golf can also be a confounding game. Wind gusts on the course reached 40 mph on Sunday, yet 16 players still shot under par, which was 70. Bae was one of them.