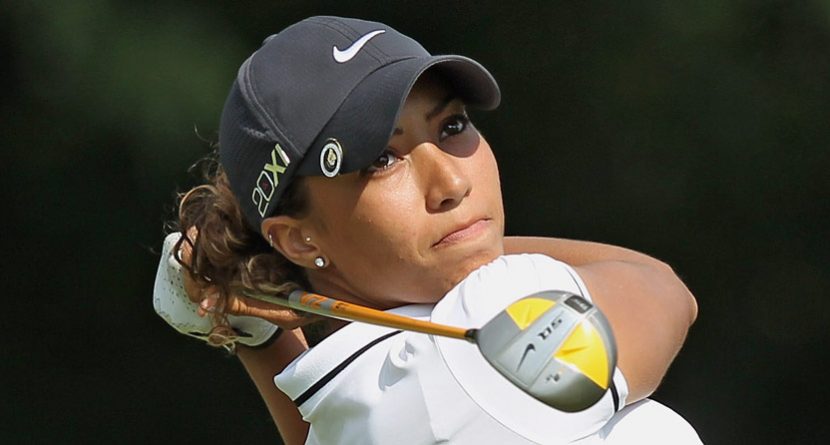 In 2013 as a Back9Network Ambassador Cheyenne Woods shared her first impressions of Augusta National, and gave some insight on what a special place it is.

I could feel the aura and excitement of the Masters the minute I got off of the plane in Augusta Sunday night.

I didn’t quite know what to expect, however, walking through the gates of Augusta National for the first time Monday morning.

But the minute I saw famous Magnolia Lane I began to take everything in– the beauty, the history and the aura of the Masters.  It was breathtaking. Magnolia Lane was just how I had imagined it from pictures and television. The large oak trees lining and hanging over the road as it leads to the clubhouse is an image so unique to Augusta National.

Sitting in the clubhouse, I could sense the patrons’ excitement building for the week. I myself was in awe of the prestigious figures and legends casually chatting with friends and enjoying the afternoon, just as I was. Johnny Miller, Billy Casper, Tony Jacklin and new Augusta National member Condoleezza Rice were just a few I could pick out of the crowd. Even though it was only Monday, there was a tangible, contagious sense of anticipation in the air.

As soon as I stepped foot on the course I was surprised by the severe undulation of the fairways and the slope of the greens that you don’t get a sense of watching on TV.  As a professional golfer myself, I could see first hand how demanding and challenging this course truly is.  It makes you really appreciate the skill of these players so much more.

I’ve always had a vision of what the course looked like based on what I’ve seen in pictures, on television, or even in the video game.  Standing between the 11th green and 12th tee of Amen Corner felt as if that image was brought to life right in front of my eyes.  As I watched Bubba Watson, Rickie Fowler and Ben Crenshaw practice, I found myself wanting so badly to hit just one shot.

The attention to detail of every aspect of the course blew me away. Every flower bed was manicured to perfection, not a speck of dirt could be seen anywhere on the course.  Even the little things were handled, too. TV cables buried out of sight is just one example of how much care is put into every aspect of this special event.

After spending the afternoon on the course, it’s obvious that watching the Masters being played on television and actually seeing it first hand are two different things.

My whole life I’ve dreamed what it would be like to attend the Masters.  My first day here at Augusta is one that I will never forget…and my week is only going to get better.  With Tiger, Rory and Phil playing at the top of their games, it’s bound to be yet another memorable Masters.