Cleveland Rocks: 5 Places LeBron Can Work On His Golf Game 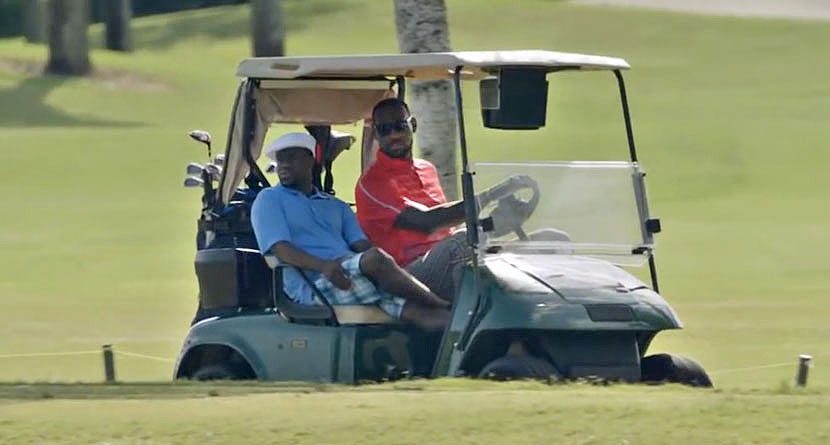 LeBron James has once again made a decision on where he’ll be taking his basketball talents. This time, the announcement came with much less fan fare. In a essay published exclusively by Sports Illustrated, James quietly told the world he’d be “coming home” to Cleveland.

James spent the first seven seasons of his NBA career with his hometown team, the Cleveland Cavaliers, but never won a title there. He famously took “his talents to South Beach” in 2010, where he won two NBA Championships. Now, King James is headed home, hoping to bring a championship (or several) with him.

James may be the greatest player in the NBA and a natural athlete, but there’s one thing he’s not very good at: golf. With him returning home to Cleveland, we’ve taken the time to select a couple of courses in Ohio where King James can go during the summer to work on his golf game:

Firestone Country Club, Akron, Ohio
Probably the most obvious choice for LeBron if he wants to improve his golf game is Firestone Country Club. With three courses — including a public one if he so chooses — there are plenty of options to test his game. Head PGA professional David J. Champagne oversees the Golf Academy at Firestone, which offers an array of instruction for all ability levels. James could also benefit from taking in the swings of some of the world’s best players when they stop by Firestone this August for the WGC-Bridgestone Invitational.

Don’t worry golf fans @KingJames & I are going 2 get 2 work on this ASAP @nikegolf I need a res for 2 @ #TheOven pic.twitter.com/rYYAUBBmzH

I’m sure anyone would be eager to give James lessons, but if Leenheer’s got access to The Oven and is already offering up his services, it might be the best choice.  Along with lessons, Silver Lake also offers great golf in close proximity to the Cleveland/Akron area.

Muirfield Village, Dublin, Ohio
While it’s a little bit of a hike from the Cleveland/Akron area — two hours and 15 minutes from Quicken Loans Arena — Muifield Village would be an easy choice for King James. Sure, it doesn’t offer the accessibility that Silver Lake or Firestone might, but c’mon, it’s Jack’s place. It’s the home of the Memorial Tournament. You can’t think about golf and Ohio and not think of Muirfield. And if you’re one of the greatest athletes on the planet who also happens to be one of the states’ favorite native sons, scoring a tee time shouldn’t be an issue.

Canterbury Country Club, Beachwood, Ohio
Like Scioto, Canterbury Country Club has also hosted the U.S. Open, PGA Championship, Senior Open, Senior PGA and the U.S. Amateur Championship. It’s routinely named as one of the 100 Best Courses in the United States and, unlike Scioto and Muirfield Village, is right in James’ backyard. In addition to its rich history, the club also features state-of-the-art lessons and fittings, as well as a caddie program to guide players on the course. Thanks to these amenities and location, Canterbury could become LeBron’s new home for golf.