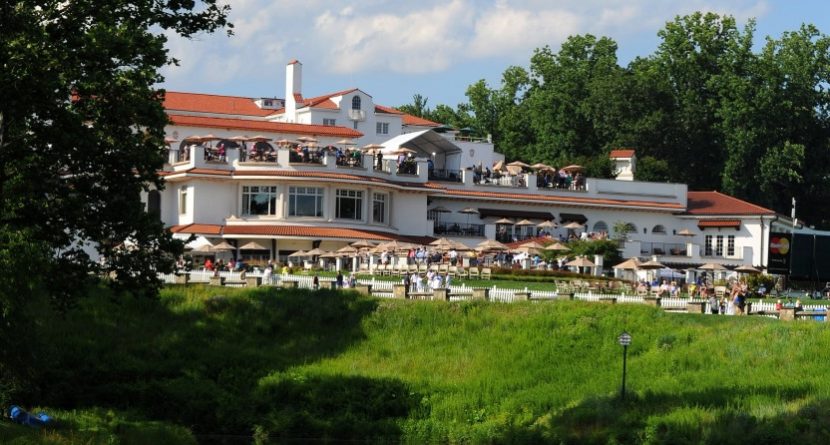 It is the lovely panorama that makes Congressional — site of this week’s Quicken Loans National — as magnificent and distinctive as any club in the game. When its majestic clubhouse and golf course were formally opened in May 1924, the club adopted the nickname of “Playground of State Men.” Nestled in the picturesque countryside just over the District of Columbia line in Bethesda, Md., Congressional includes two 18-hole golf courses, tennis courts, horse riding paths and a hunting terrain of about 400 acres.

The Origin
The club was founded by two U.S. Representatives from Indiana, Oscar Bland and O.R. Luhring. Their idea was to create a first-class country club where members of Congress could enjoy the finer things in life. Future president Herbert Hoover, then the Secretary of Commerce under President Warren G. Harding and President Calvin Coolidge, became the first president of Congressional Country Club. Early members included John D. Rockefeller, Andrew Carnegie, Hiram Walker, William Randolph Hearst and Charles Chaplin. Tommy Armour was the first head pro and brought fame to the club when he won the 1927 U.S. Open and the 1931 Open Championship.

The Golf Courses
Of the 400 acres of ground available, approximately 300 were eventually devoted to the creation of two complete golf courses of 18 holes each: the world-renowned Blue Course, and the Red Course. The original design of architect Devereux Emmet was renovated by Donald Ross in 1930. Ross added new tees, bunkers and greens, getting rid of the par 6s. In 1957, Robert Trent Jones built a new nine, and revised the layout before the 1964 U.S. Open. His son, Rees, in 1989, rebuilt every green, adding mounds and bunkers and re-designing a new nine. Along with the Blue Course, the Red Course was twice renovated by George and Tom Fazio, who redid the final nine holes in 1977. The War
The original architecture included a Presidential Suite, which was dedicated by Mr. and Mrs. Coolidge in the summer of 1924; one indoor and two outdoor swimming pools; a four-lane bowling alley; squash racquet courts; a gymnasium; and a spacious locker room. However, in the 1930s, without income from liquor during Prohibition, the club quickly ran into financial trouble. Author Jaime Diaz said, “By 1940, Congressional was in near disrepair, but it was saved by World War II.”

In his book, Hallowed Ground, Diaz writes: “In 1943 the precursor to the CIA, the Office of Strategic Services (OSS), took over the club grounds for thirty months. A mockup of a C-47 fuselage was placed on the practice green for paratrooper drills, the 15th tee was the site of machine gun training, and test missiles were fired from the 16th fairway. By the end of the war, the club was fairly well trashed, but the well-connected membership was able to bargain for an extremely generous settlement from the government.”

The U.S. Opens
The first major held at Congressional was the U.S. Open in 1964, destined to be one of the most dramatic ever. It was the last U.S. Open to finish with two rounds on Saturday. Ken Venturi, a 32-year-old pro who many years later became an analyst for CBS Sports, began with rounds of 72-70, which put him in fourth place heading into Saturday’s final 36 holes. Facing physical collapse from the oppressive heat and humidity in Bethesda, Venturi went out to complete a 66. He was two strokes behind Tommy Jacobs.

Feeling weak during the break before the final round that afternoon, Venturi was checked out by John Everett, a doctor and member at Congressional, and found to be dehydrated. Despite his condition, Venturi hit a par 70 and a winning score of 278. By the end of the round, he was so shaken and so weak that he couldn’t even read the numbers to sign the scorecard. Joseph Dey, the executive director of the USGA, looked over his shoulder, checked the scores and told him to sign it. Congressional has hosted the U.S. Open two more times. In 1997, South African Ernie Els won his second such title when he hit a classic 5-iron from 212 yards to within 10 feet on the 17th green, ensuring him of par. His competitors, Colin Montgomerie and Tommy Lehman, made bogeys. That year, Bill Clinton became the first sitting president since Warren Harding in 1921 to attend the championship.

In 2011, Rory McIlroy of Northern Ireland won his first major on the course with a margin of eight shots and a final score of a record 268, 16 under par. At 7,574 yards, the Blue Course is the second-longest course in U.S. Open history.

The Other Big Events
Since holding the 1949 U.S. Junior Amateur, Congressional hosted two additional USGA events, including the 1959 U.S. Women’s Amateur and the 1995 U.S. Senior Open. On the 60th anniversary of the PGA of America, 1976, Congressional was the site of Dave Stockton’s victory at the PGA Championship. The Kemper Open (later called the Booz Allen Classic) was played at Congressional seven times between 1980 and 1986.

In 2007, Congressional got back onto the PGA Tour’s yearly schedule by joining forces with Tiger Woods, who hosts the current tournament and whose foundation is the beneficiary. He’s won twice in the three events he’s played at Congressional (he was injured in 2008 and ’13; the 2010 and ’11 events were at Aronimink Golf Club) and set the 72-hole record with 267 in 2009.