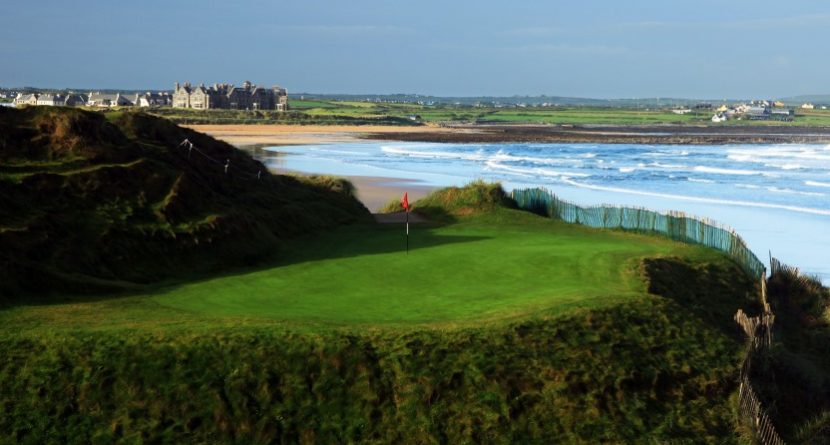 Donald Trump‘s golf empire keeps growing. The Trump Organization announced this week that it has moved into Ireland, purchasing the Doonbeg Golf Club in County Clare, a gorgeous track sitting on the west coast of Ireland along the Atlantic Ocean.

That brings Trump’s golf course collection to 16 worldwide, with four now outside of the U.S. The accompanying hotel on the property is the first in Ireland for the Trump Hotel Collection. “I am thrilled to announce that we have purchased yet another incredible golf resort,” Trump said. “From Trump National Doral, Miami to Trump International Golf Links, Scotland, known as ‘the greatest golf course in the world,’ we only have the best. Doonbeg is an already-terrific property that we will make even better – it will soon be an unparalleled resort destination with the highest standards of luxury.”

The acquisition goes to show that Trump firmly believes golf is still growing, not stagnating like some believe. He mentioned as much in an interview with Back9Network:

The Irish Times estimates that Trump purchased the property for 15 million Euros, which would put it at roughly $20.5 million. It will now be called Trump International Golf Links, Ireland.

The 18-hole course designed by Greg Norman and opened in 2002 takes up 400 acres, two and a half miles of which are on the Atlantic Ocean. The hotel features 218 suites, a sprawling spa and numerous restaurants, all of which will be run by the Trump Hotel Collection. The Irish property will be the 12th hotel in that collection.

Here’s a look at Trump’s full lineup of golf courses: