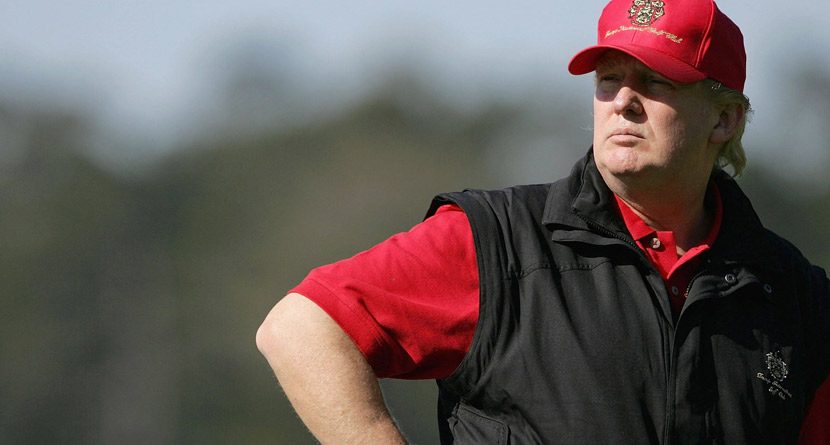 The Trump organization was also awarded the 78th Senior PGA Championship, to be held in May 2017 at Trump National Golf Club in Potomac Falls, Va.

Excited to host two great championships at two of our best properties, @seniorpgachamp at Trump DC & @pgachampionship at Trump Bedminster

For more than 15 years, the Donald has been dealing in golf properties, trying to lock down a men’s major golf championship. He’s successfully courted the LPGA and hosted numerous events for the women over the years, including a seven-year run hosting the LPGA Tour’s lucrative season-finale at Trump’s West Palm Beach property from 2001-2008.

Related Link: Donald Trump on the State of Golf

He already has his hands on one of the marquee events on the PGA Tour schedule in the WGC-Cadillac Championship held at Trump Doral, and it seems a major championship is the logical next step for Trump.

“It is my great honor to be involved with the PGA of America, an organization which I have long respected,” Trump said at a press conference to announce the partnership. “I would like to thank Ted Bishop and Pete Bevacqua for having the confidence in me and The Trump Organization.”

While he now has the 2022 PGA Championship sewn up, it’s more likely that his first shot at hosting a major will be outside the United States.

Open Championship venues have only been announced through 2016, and while Turnberry was once passed over in the Open rotation, it’s hard to imagine that will be this time around. Everyone remembers the 2009 edition of the Open that almost saw then-60-year-old Tom Watson come up just shy of becoming the oldest major champion in history.

Trump has had success with his other USGA events; the 2009 U.S. Junior Amateur and U.S. Junior Girls Championship paved the way for him to get his first major test in 2017, the U.S. Women’s Open. That championship, like the 2022 PGA Championship, will be played at Trump Bedminster.

“The PGA of America is excited to begin a new chapter of major championship history by taking two of our premier championships to venues that bear the Trump label of excellence,” PGA President Ted Bishop said at the press conference. “Mr. Trump understands what it means to present both the finest venues in golf and an unforgettable experience for both our fans and the greatest players in the game.”

With his track record at the WGC-Cadillac Championship and other USGA Championships, and his grand personality, whenever he gets his first major, Trump will make sure it’s one for the ages.

Photos: On Course With Donald Trump