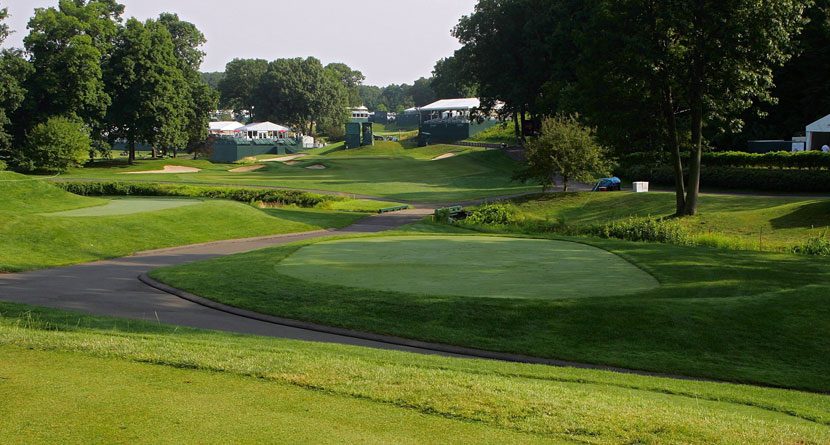 The par-4 15th hole at TPC River Highlands hasn’t exactly challenged players this week at the Travelers Championship. In fact, it’s one of the easiest par 4s on the PGA Tour.

The short 296-yard hole encourages players to take out driver and go for the green, rewarding them with potential putts for eagle. Well, players have certainly been tempted by the short hole, and they’ve taken advantage, as well.

The second round has yet to be completed, and there have already been eight eagles at the 15th hole this week, the most for any par 4 on tour in 2014. The next closest? A tie between the 17th at TPC Scottsdale and the 14th at Quail Hollow with six apiece. Remember, there’s still two more rounds to be played.

John Daly and his money pants contributed with an eagle of their own Friday morning when he made a long 41-foot putt from the right side of the green.

Even more impressive than Daly’s long putt (and pants) was Troy Merritt’s near ace on the hole, leaving himself with a kick-in eagle. Had it gone in, it would’ve been the second albatross of the tournament, with Trevor Immelman’s at the 13th hole being the other.

Here are the other six eagles, which have been a mix of long putts and great chips, unsurprisingly. These guys make it look too easy.

One of the best shots on the 15th hole didn’t result in an eagle, however. Chesson Hadley found himself in some trouble after hitting a wayward tee shot, but his second shot from the bushes was quite a recovery.

It’s safe to say that the Travelers Championship is providing players with an easier layout than last week’s U.S. Open at Pinehurst No. 2.