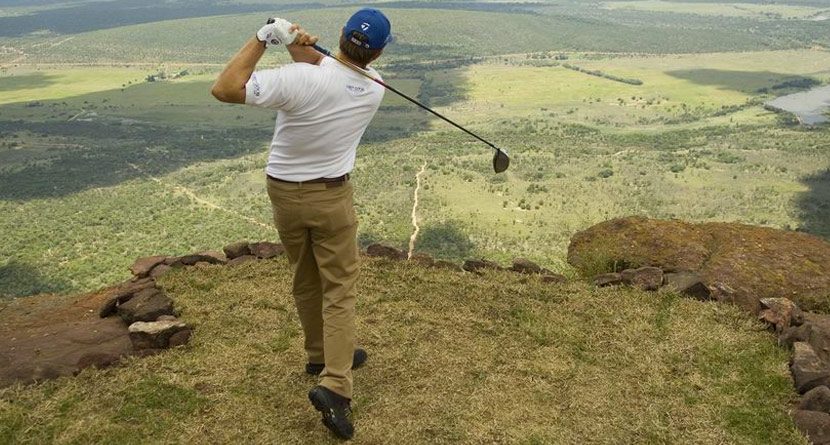 The amazing thing is that the Legends Golf and Safari Resort’s famous lineup of hole designers — which includes Padraig Harrington, Sergio Garcia, Justin Rose, and Vijay Singh, to name a few — is not how the course markets itself.

So what is this South African golfer’s paradise known for?

Oh not much, only the longest (and highest) par 3 in the world.

Without getting all geeked out, as this insane shot relates to the laws of physics and how the ball will travel on quite an extreme arc, it plays about 260-270 yards due to the vertical drop.

Called the Extreme 19th, this hole is the centerpiece of the course (you don’t say?). But playing it is not part of a regulation round of golf there. Here’s the price breakdown:

That extreme price does come with a few perks. Players get a helicopter ride to the tee and back down after hitting, a souvenir cap and glove, and a DVD of their play on the hole.

The coolest part: Each player is given six balls with tracking devices, since losing sight of a ball hit from 1,410 feet up is pretty likely.

There’s a prize worth over $1 million for any player that makes a hole in one. The money has yet to be claimed. Eight players, however, have made birdies, and 96 pars have been recorded — including many professional golfers. Harrington was the first person to make a 3, back in 2008.

The highest recorded score, according to the course’s website, is a 23. And there are hundreds of other players whose scores say “NR.” We assume that’s short for “Way too many to count.”

Have you played this epic hole? Drop us a note @Back9Network.