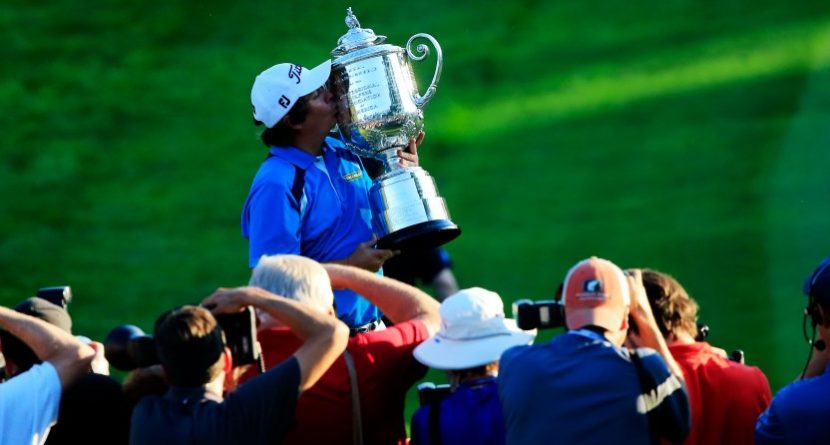 So, the United States PGA Championship was re-branded.

Having labored for 30-odd years to crowbar the tagline “Glory’s Last Shot” into the marketing-resistant brains of golf commentators, journalists, and übernerds everywhere, the powers that be have opted for a sudden, and more modest, change in tack. Indeed, rather than shoot for the stars, PGA of America president Ted Bishop and friends have opted to shoot for the brutally factual.

Purists would argue – and they’d probably have a point – that it’s hardly a move to be lamented. Major championships shouldn’t need a crutch to lean on or marketing razzmatazz to fashion an audience. They should flourish by dint of their historical pedigree, the quality of their venues, and their champions. But the PGA Championship has long been a special case.

It wasn’t so long ago that it appeared on the verge of forfeiting its major status altogether. With tournaments routinely played in the hazy August heat of the Deep South and fields contaminated with great handfuls of club professionals, consensus opinion had it marked as creeping towards irrelevance. There was no great drama – apart from the short-lived Great Palm Beach Bikini Scandal of 1987 – no insurgency from abroad, just a burgeoning sense of lethargy and tawdriness, a historical relic crumbling in plain view.

The term Glory’s Last Shot traces its inception to this dark time, before it became apparent that something, somewhere, possibly someone, had to give.

The Open Championship had history and novelty stamped all over its moonscape venues; the Masters had the beauty and aristocratic pretension of Augusta National; the U.S. Open had a claim to democracy and reputation for exacting, even brutal, architectural shenanigans. Having jettisoned its one distinguishing characteristic – a match-play format – with the onset of live television, the PGA Championship had none of these things. As a result, it spent the best part of three decades succumbing to a law of diminishing returns.

The trajectory didn’t change until the PGA embarked on a broader campaign of reform. Out went the impractical venues, the way-out-of-their-depth qualifiers, and the sense of complacency. In came prestige layouts, a field broad and deep enough to be called the strongest in golf, and a renewed sense of vigor. Glory’s Last Shot – the slightly silly, cheesy moniker though it is – was dusted off to become the rhetorical centerpiece of that slow rehabilitation. In simply naming the initiative, giving shape to all the behind-the-scenes changes, it helped bring it all to life.

The results have been remarkable. The PGA Championship as we know it today is routinely gripping, the hunting ground of proven major winners and Ryder Cup stars. What’s more, the few recent surprises it has sprung have tended to be more heroic than baffling.

As a rule, boardroom spin is to be resisted. But rules, after all, are made to be broken, and this little flash of Hollywood played its part in protecting the golfing calendar from all manner of vandalism. If the USPGA had crested an even lower ebb and slid into obscurity, imagine the horrors that would have awaited us. The Players as golf’s youngest major? The Tour Championship? Both, grim alternatives.

Glory’s Last Shot may have been a touch overwrought, a trifle heavy-handed, but it served the greater good. By contrast, the decision to do away with it came at the behest of interests golf would be better to keep at arm’s length.

The PGA Championship can probably afford to jettison the remnants of its time in intensive care; its privileged status for the time being looks secure.

That said, there are reasons to mourn the passing of Glory’s Last Shot, not least of which its assassination by corporate super event. There’s something about the idea of harmless major championship traditions, no matter how trivial or silly, falling prey to outside influence that’s disturbing, particularly when it comes to the most vulnerable of the four. Like a Jenga tower, the modern PGA hasn’t been built to weather incremental losses. Here’s hoping it doesn’t have to.