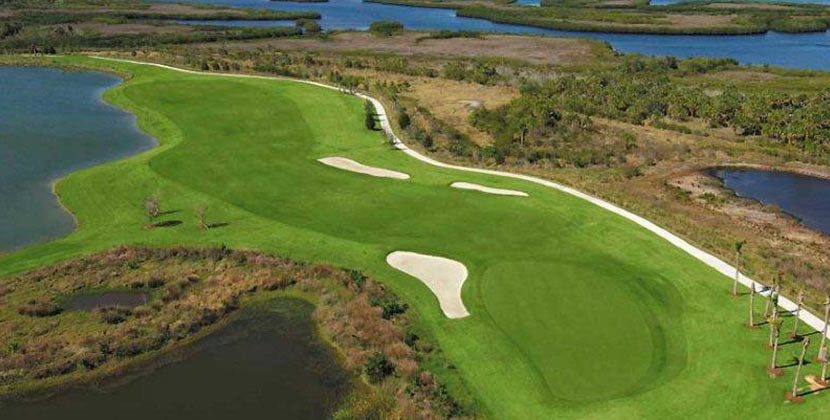 Back in the day it was prestigious, desirable and often profitable to own a golf course. So much so the United States saw a golf course construction boom from the late-1990s to mid-2000s that had new courses opening at the rate of more than one a day. Not so much anymore.

Since the manure hit the fan in the middle part of the last decade more courses have been closing than opening creating a net loss of courses unseen since World War II. Whoever the geniuses were that thought there would be enough golfers to fill all those tee sheets, they made some serious miscalculations.

But, as they say, one man’s loss is another man’s gain, and although breaking even is the new success in owning a course it has created some great, high-value playing opportunities for golfers.

One place that is chock full of golf courses is the Bradenton and Sarasota area just south of Tampa Bay on Florida’s Gulf Coast. With over 50 golf facilities in the area, the competition for the golfing dollar is fierce in Manatee and Sarasota counties.

Several once completely private clubs have opened their doors to daily-fee players and semi-privates clubs offer deals galore on high-quality layouts. The municipal courses are so inexpensive it is hard to believe.

The clubs that have remained private are begging for new members by offering practically roll-your-own payment structures. Initiation fees are essentially a thing of the past. If you might want to buy a home and join the club in a golf course community, the red carpet is waiting for you.

River Wilderness is a 1980s Ted McAnlis design in a mature residential community. Golf fans may recognize the name from seeing it on Paul Azinger’s hat during his heyday on the PGA Tour. Zinger doesn’t play much anymore but still resides in the area. The par-72 layout is a pretty good test but quite reasonable from the appropriate tees. The greens are always fast and true.

University Park is a very handsome, once private development now open to the public. It offers 27 holes, all designed by Floridian Ron Garl, a large, well-appointed clubhouse, huge practice area and a superb staff headed up by jaunty Englishman Ashley Hayden. Day trippers can get on at University Park but the place still has the look, feel and conditions of a private club. Another outstanding 27-hole, semi-private club with a private club feel is the River Strand Golf and Country Club. Opened in 2006, this Arthur Hills design is in a residential development but many of the holes are out by themselves amongst the wetlands and woodlands. With a lot more random bunkering than you usually see on Florida courses and the traditional water hazards the Tributary, Estuary and Sanctuary nines will challenge you all day long. Also in the semi-private category is the IMG Academies Golf and Country Club near the ocean in South Bradenton. Formerly known as the El Conquistador Country Club, this 18-hole Mark Mahannah design opened in 1972 but got a huge makeover from Gene Bates in 2006 when IMG took control. This is a nice, gentle layout and a great spot for a couples walking day.

Waterlefe Country Club is as visually impressive course as you’ll find in the area. The variety of settings is unmatched between holes that play out along the giant Manatee River to holes with water everywhere to mature forest holes dominated by giant oaks and ancient palms, Waterlefe will continually amaze.

The best values among all the good deals can be found at the areas municipal courses.

Bradenton has the Manatee County course that could be the deal of the century — $25 with cart after 11 a.m. Managed by Florida-based Pope Golf, this is a well-run and darn good golf course. Advertised as the closest course to the white sand Gulf of Mexico beaches at Siesta Key, Ana Maria Island and Holmes Beach, this could be good for a sneak away 18.

River Run Golf Links is the Bradenton city-owned muni located next to the Pittsburgh Pirates’ spring training facility. An old-style Florida layout that plays through the native vegetation and out to the river’s edge, River Run is just a pleasure to play. If you want a relaxing walk on a beautiful Florida day for very reasonable money then River Run is for you.

Sarasota has some history at its muni. Designed by Donald Ross and opened in 1927, the Bobby Jones Golf Complex is 45 holes of pure public golf. Refurbished by Ron Garl in 2006, the facility offers two regulation 18s, the British Course and the American Course, and the nine hole John H. Gillespie Executive course. The rates are beyond reasonable.

If a little winter Florida golf getaway is on your mind, you will not find a place with more courses, in a greater variety, all with excellent conditions at a better price than in the Bradenton and Sarasota area.