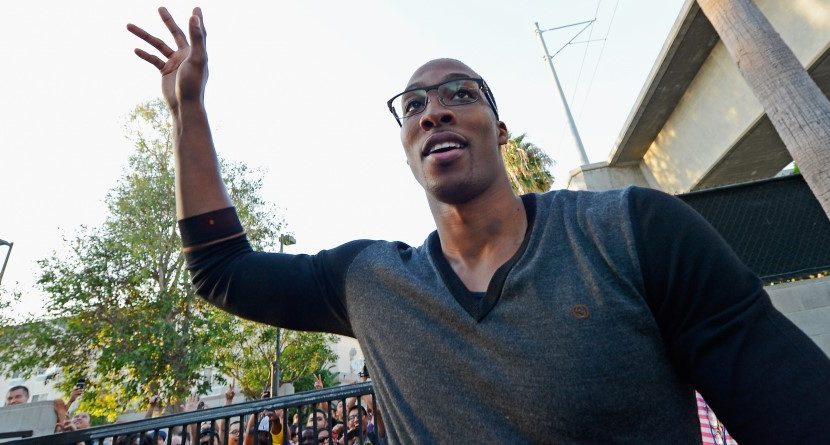 Superstar free agent Dwight Howard faces a big decision this summer: To stay and play in L.A., or take his talents elsewhere.

We want to help the big guy decide. Knowing he’s a recreational golfer – check out his clubs – we looked up the best courses in or near the cities on his short list. Price will be of no issue to Howard, and we’re assuming he’ll have no problems getting on private courses either.

Los Angeles
The Lakers appear to be the front-runner for Howard, largely due to the fact they can offer a five-year, $118 million contract. Other teams can only sign him for four years and $88 million. And L.A., not surprisingly, boasts some pretty plush courses to woo Howard. Riviera Country Club, which hosts the PGA Tour’s Northern Trust Open, sits just 19 miles from his office, the Staples Center. Granted, L.A. traffic might make that an hour’s drive, but maybe he can just hitch a ride in Kobe Bryant’s helicopter. Should Howard want to join the club, Riviera’s initiation fee is reportedly $250,000, but that’ll take him just one game to earn. Houston
Serious contenders in the Howard Sweepstakes are the Rockets, but the area lacks a little in the category of top-notch golf courses. The nicest is the tournament course at Redstone Golf Club, which hosts the PGA Tour’s Shell Houston Open in Humble, Texas, about 30 minutes north of the Toyota Center. Green fees run $175, which again is chump change to Howard. Dallas
The Mavericks and owner Mark Cuban really want Howard in Dallas, and that sentiment is shared by at least one restaurant, which will give the 6-foot-11, 265-pounder free chicken fingers for life if he becomes a Mav. Yet, Howard could probably eat all the chicken he wants in addition to playing all the golf he wants if he just joined the Dallas National Golf Club. It boasts what is widely considered the best course in all of Texas, and is a quick 20-minute drive southwest of American Airlines Center. Atlanta
Born in the ATL, Howard may have an affinity to return home if the Hawks can surround him with the right players. As of now they’re a longshot, but they can offer the Peachtree Golf Club, founded by the legendary Bobby Jones in 1947. It’s a long course, which would suit Howard’s game – we assume he and those sizable arms of his are beasts off the tee. It’s also just 20 minutes away from his would-be office, Philips Arena. And if Howard really wanted golfer’s paradise, he could drive two hours east to Augusta National. If Peyton Manning can get on the course, we’re assuming Howard can too. Oakland
The darkest of horses in this Howard race might be the Golden State Warriors. Initially, Oakland doesn’t come to mind when thinking of beautiful golf courses, but oh what lies the Bay Area. Thirty minutes across the bay in San Francisco is The Olympic Club, which hosted its fifth U.S. Open in 2012 on the Lake Course. Or right next to that is the renowned San Francisco Golf Club. If that’s not enough, golf heaven exists two hours south of Oakland on the Monterey Peninsula, which most notably features Pebble Beach Golf Links, also a five-time U.S. Open host.