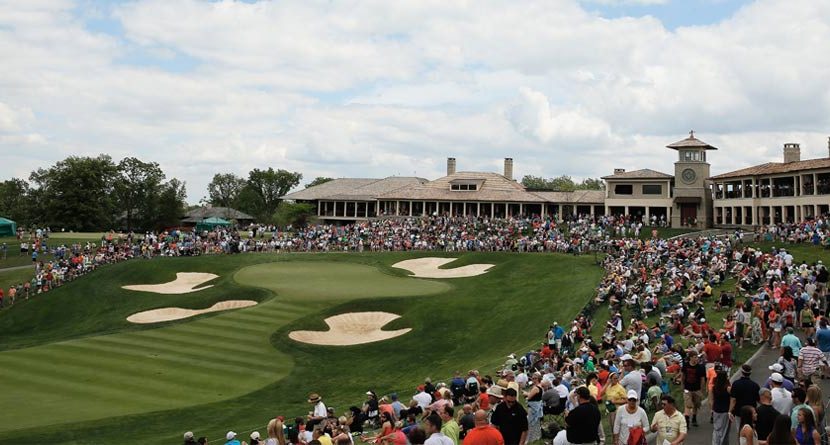 Columbus, Ohio is a surprisingly great golf town with four golf courses currently ranked on the Golf Digest Top 100 list. For a city in the middle of Ohio with a population of just under 2 million that’s pretty impressive. I suspect that a big part of the reason a town like this has such remarkable golf is because the greatest professional golfer to ever live, Jack Nicklaus, is a native son of Columbus. Interestingly, of the four Top 100 courses in Columbus, three of them were built AFTER Jack had won at least 6 of his 18 major championships. I guess its safe to say that Jack may have exposed Columbus to the golf bug and the good people of Columbus were receptive.

Nicklaus was so smitten with Bobby’s tournament that he felt inclined to create a very special tournament of his own and went about setting the wheels in motion to make it a reality. If one wishes to host a golf tournament the first thing one must have is a suitable and willing golf course. I’m sure there are hundreds of golf courses all across America who would have lined up for the opportunity to host a tournament for Mr. Nicklaus, but that’s not what he had in mind. In the spirit of Bobby Jones, Jack wanted to have the tournament at his OWN club that embodied HIS love and respect for the game, so he set about creating his own golf Shangri La – Muirfield Village Golf Club.

In the early 1970s Jack was pretty new to the whole golf course design business so he thought it best to partner up with someone to help with the project and that someone was Desmond Muirhead. After the construction was completed the club opened for play in 1974 and two years later, in 1976, the very first Memorial Tournament was played. It continues to be played to this day and the field is loaded with all the very best players in the game who make their annual pilgrimage to Columbus to “kiss the ring” and pay homage to Jack. The Memorial Tournament is clearly one of the very best non-major golf tournaments that there is and it’s obvious that the younger generations of professional golfers have a firm grasp of just how important Jack is to the game.

Knowing that I would be going to Nicklaus’ club and playing a golf course that hosts such a significant tournament I was a little punch drunk at the thought. I didn’t really know what to expect, but I had feeling that it was going to be pretty good. My friend who had arranged the outing was giddy with anticipation and his excitement was rubbing off on me. I think his excitement was aptly expressed when he picked me up at my hotel in the morning and commented that he felt like he should have left cookies out for Santa the night before!

When we arrived we dropped our car off and headed into the clubhouse to meet our host and have a little bite to eat. After lunch we took a tour of the locker room and clubhouse with the highlight for me being the visit to Jack’s trophy room where I saw The Masters trophy in person for the first time . . . VERY cool. Once the clubhouse tour finished we headed out to the practice green to roll a few putts and then over to the 1st tee.

I had been bombing my driver the day before so our host thought that the best set of tees for me to experience the course would be the blues which play to 6,739 yards. I normally play 6600-6700, so I was perfectly comfortable with the decision. I should have noticed that the rating and slope for the blue tees was 74.1/148 and I might not have been so comfortable.

Below is a view of what the approach shot from the area of the fairway bunkers looks like.

The 1st green, pictured below, is also surrounded by bunkers that make for a tough up and down. Jack doesn’t waste any time letting players at Muirfield Village know that the course is going to be tough!

The photo below was taken from the tee box of the 2nd hole which is a 411 yard par 4. For the best angle into the green it’s best to favor the middle or right side of the fairway. Approach shots from the left side can be a little awkward.

The 2nd green is the first look a the water hazards found all around Murifield Village. Approach shots that go long or right are almost sure to get rinsed.

The drive at the 3rd hole is from an elevated tee box and doglegs left. We played this par 4 from from 374 yards. The further to the right a drive goes the longer the approach into the green will be. The best play here is a draw that starts in the middle and moves to the left around the tree. Anything to the left and short will likely require a lay up before being able to go for the green.

The approach to the 3rd hole pictured below is over water and will be just a short iron for players who hit a good drive. The green is two tiered and the lower hole location in the photo below is a much friendlier than when the hole is cut on the top tier.

For more than six years The Itinerant Golfer has been the leading source for information on the greatest golf courses in America and has been the editor in chief of GolfTripper.com, the #1 online information depot for premiere golf destinations across the United States.