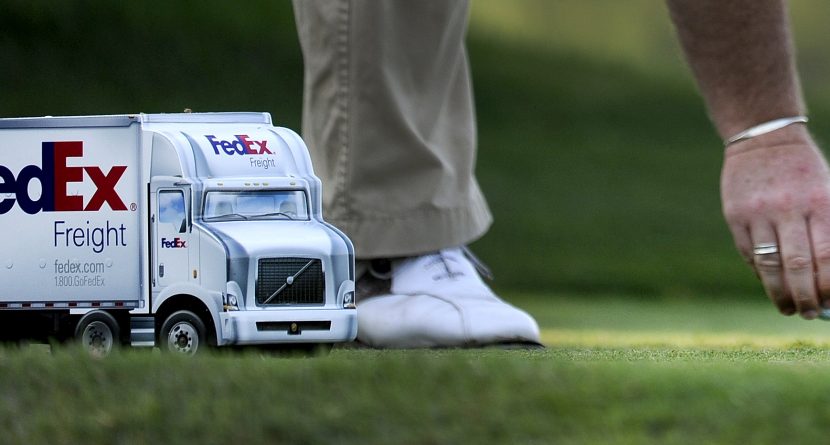 Turn to the “Golf” subsection of the large ring-binder in which I house my menagerie of pet peeves and you’ll see the modern failure to name tournaments by their historical listed named somewhere near the start (ahead of even Pat Perez). And I’m not talking about the American tendency to refer to the Open Championship as “the British Open,” painful though it is.

You see, back in the distant past, when dinosaurs roamed a black and white earth, the professional game was populated primarily by lifelong journeymen and country club grifters, and its tournament calendar consisted of little more than a loose accumulation of regional tournaments and exhibitions. It was only with the onset of the analog age, when the ménage a trois between sport, broadcasting and high-concept advertising began to get hot and heavy – call it the Mad Men Effect – that golf’s topography began to settle into something resembling its current form.

Central planning became that bit more rigorous, and the billing of sponsor’s names that bit more prominent. Amidst it all, however, the oldest and most venerable tournaments lived on, albeit wearing a prosthetic mask emblazoned with sponsors’ logos. They were landmarks, like the Western and Los Angeles opens, that acted as convenient touchstones with the past.

For years, the habit of referring to events by their original, pre-commercial names lived on amongst the players, caddies and journalists who called the mown fairways of the PGA Tour home. The Los Angeles Open was always the Los Angeles Open, regardless of the name the title sponsor chose to stamp on the billboards flanking Riviera’s main entrance.

This refusal to play along with corporate branding strategies wasn’t just about contrariness; the habit formed part of an identity that helped distinguish poseurs and blow-ins from the hardy souls who actually spent their lives ping-ponging from one motel to another.

Nowadays that lexicon of insiderdom has given way to a simpler, more sterile habit of calling things by whatever the powers that be say they’re called. Helped along by a PGA Tour legal department always ready to correct deviations from the norm, the markers of historical continuity have largely gone the way of the peripatetic lifestyle that spawned them. Instead of a rhetorical landscape populated by old reliables like the aforementioned Western and Los Angeles Opens, we have “the Northern Trust,” “the BMW,” “the Urinal Lozenge Open”. This new idiom, that’s insinuated its way into use through sheer force of cash-cash-money and repetition, doesn’t just reek of corporate venality – which of course it does, emphatically – it suggests the extent to which professional golf’s own sense of community has hit the skids. It’s one marker among many by which we can read the approach of a dystopian future, where major-winners stand on the shoulders of multinational giants rather than the Hogans, Seves and Vardons of yore.

It might not seem like a big deal – in fact, the very opposite of a big deal – but without a deeper sense of tradition or belonging to draw upon, the current PGA Tour is just a bunch of guys sharing a well-mown field for a few hours a week. In its absence, everything kind of teeters on the verge of meaninglessness.

So, I worry golf’s insider shorthand is being done in by a generation of introverted, monomaniacal FedEx Cup millionaires. I fear living in a perpetual present, where just about anyone can pony up and claim a tournament franchise as their own. And because wily contract law – Damn you, legal systems! (What has they ever done for us?) – obligates every talking head to give sponsors total possession over not only the tournament they’re hosing but its entire history, things aren’t going to get better anytime soon.

What makes all this extra frustrating, what induces an ache in my soul akin to that experienced after a concussive blow to the testicles – read: sharp needle-strike of pain followed by radiating shockwave of discomfort – is that this linguistic coup has been carried out opposite a long-running and unedifying campaign to preserve golf’s least worthy “traditions.”

For within that shared worldview of yesteryear – golf culture, if you will – there lurked no shortage of associations worth casting off. No one’s buying these off, however; so odds are they won’t be going anywhere soon.

Ambivalence towards sexual and racial discrimination? We’ll have a bit of that. The wholehearted embrace of big, swinging plutocracy? Some of that, too. And sycophancy? We love us some sycophants. Tough to shake, all this is no more traditional than the persistence of violent crime or sexually-transmitted infections.

Yes, Augusta National may have admitted a token member or two. The PGA and European Tours have their fingers in numerous charitable pies. But watching Peter Dawson, chief executive of the R&A, this morning chuckle his way towards a dismissal of institutional sexism, you could be forgiven for asking what, if anything, had really changed.

Tradition may be on the way out, but it looks like golf’s bad habits will be with us for a while yet.