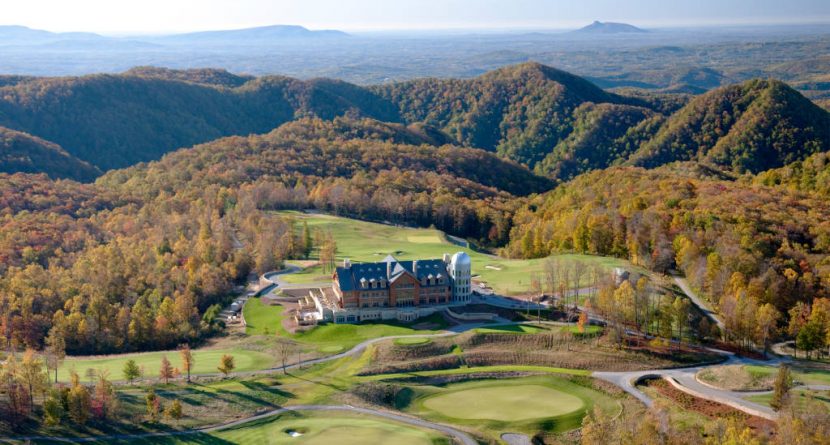 The Highland Course at Primland is a golf destination that is definitely worth going the extra mile, or miles.

The spectacular Donald Steel creation – ranked 13th among Golf Digest’s “America’s 100 Greatest Public Golf Courses” – is located high atop the Blue Ridge Mountains, in the middle of nowhere. Really. In fact, it’s a two-mile drive from the US-58 turnoff to the guard house (a black bear sitting in the middle of the road greeted me a half-mile earlier than did the security guard), then another six-mile, winding journey on a dirt road through thick wilderness up the mountain to the resort, which also includes luxury lodging and non-golf activities.

In other words, allow yourself 15 to 20 minutes more than your directions dictate.

Your building anticipation is rewarded by the stunning views outside the golf shop and from the first tee, and they get even better. While the 7,053-yard, par-72 layout is plenty tough – it has a 74.6/145 rating/slope from the tips – the biggest obstacle between you and a good score might be keeping your eyes on the ball instead of the neighboring mountain peaks and valleys.

Still, Steel’s sneaky-tough design can definitely inflict serious damage to one’s score – and ego. While I generally played well, including two birdies, Steel’s wide fairways can sucker golfers into trying to carry dogleg corners – guilty as charged – which appear closer than they are. Three of my seemingly perfect drives landed in the beautiful waving, protruding fescue at the corners on three holes, resulting in lost balls and double bogeys. Accurate drives, or lots of balls, are vital.

Steel masterfully blended a fairly traditional layout into this sprawling tract of land – the course’s highest point was once fertile farmland with some rock outcroppings – and didn’t create any forced carries or water hazards. Strategic bunkering is prevalent in fairways and surrounding the fast, true putting surfaces, which are flanked by mowed collection areas.

Selecting a favorite Highland hole is akin to having to choose a favorite beauty-pageant contestant, but it’s impressive how Steel hit the mark on all five par 3s. Besides wonderful length variety – 195, 149, 220, 205 and 160 yards – good shots are truly rewarded, especially on the four one-shotters requiring do-or-die shots over valleys.

Even three double-bogeys over the final four holes couldn’t contain my enthusiasm for this stunning course. I’m betting you’ll also look forward to returning home to tell your friends. You’ll just have to be patient during the long journey back to civilization.

Packages: Numerous golf packages, including stay-and-play packages, are available by calling 866-673-7802 or visiting their website.