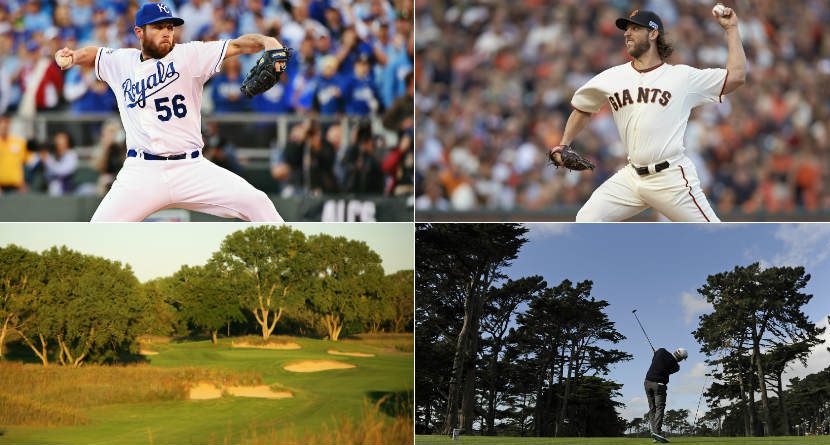 The World Series is in full swing as the Kansas City Royals take on the San Francisco Giants in the highly-anticipated Fall Classic. While we’re absolutely fans of baseball, our love surrounds the game of golf — and that, of course, got us thinking. How would these two teams fare in a battle of golf courses? More pointedly, how do the golf courses in the respective World Series cities compare?

Home to PGA Tour legend Tom Watson, Kansas City boasts its own flavor of courses. While it’s not necessarily known as a hotbed for golf, you can do well with the sticks if traveling to KC. Here’s a look at the top five courses in the Kansas City area:

Mission Hills Country Club
Originally opened in 1914, Mission Hills sits directly on the state line between Kansas and Missouri and holds a rich history in the game for both states.

Swope Memorial
A lesser-known A.W. Tillinghast design, here’s a park-style course open to the public. After your round, enjoy the park and zoo on the grounds.

Prairie Dunes Country Club
While it’s not technically in Kansas City, or even the same state as the Royals, Prairie Dunes is one of the nation’s best courses — and it’s only a few hours away.

Sand Creek Station
Here’s another one within driving distance to Kansas City if not solely for the fact that it’s simply worth the drive. Sand Creek recently held the U.S. Public Links Championship and is among the country’s top public courses in multiple annual rankings.

One of the nation’s earliest golf meccas, San Francisco is home to numerous courses — both public and private — that hold a large place in American golf history. Here’s a look at five of the top courses in the Bay Area:

Presidio Golf Course
Another well-known, public course in the San Francisco area is Presidio. The course and area surrounding it is managed and kept safe by the Presidio Trust Initiative, meaning that despite being just a few minutes away from the busy streets of downtown San Francisco, you’ll have a quiet and serene place to play golf while in town.

Lincoln Park
While it’s not as prestigious or refined as the others on this list, you don’t get closer to the heart of San Francisco and the Bay Area than Lincoln Park. With unobstructed views of the Golden Gate Bridge, the charming Lincoln Park is a must play if you’re in the area.