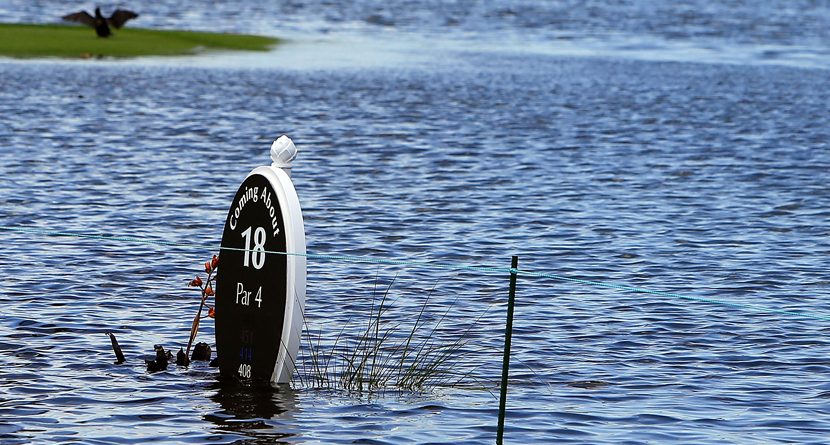 Apparently the golf gods read our story yesterday that outlined what we miss about old time golf.

Torrential rain has hammered the Bahamas LPGA Classic this week, leaving the Ocean Club on Paradise Island under water and players using fishing rods instead of golf clubs.

The course was unplayable and Thursday’s opening round was postponed.

On Friday, tournament officials shortened the course to 12 holes and the players began the first round.

Yep, 12 holes. The hope is that the players can get 36 holes in by Sunday to make the tournament count. There won’t be any cuts but the top 70 players after three rounds of play will earn money. As you may know, a round of golf wasn’t always comprised of 18 holes. Back in the 15th century when the sport was in its infancy at St. Andrews, golfers would play a random number of holes depending on the layout of the land.

Eventually, an 11-hole course was established, with the holes laid out end to end. A complete round would take the golfers out and back.

Some of the holes were combined in 1764, according to the USGA, because they were too short and the course became nine holes. The 18-hole standard followed. Just like those early years, geographical obstacles — in this case flooded out fairways, greens and sand traps — are forcing organizers to carve a roundabout route around the land.

Here’s the new layout at the Ocean Club:

Here’s one job we’re glad we don’t have: The guy who makes the scorecards. Talk about a headache.