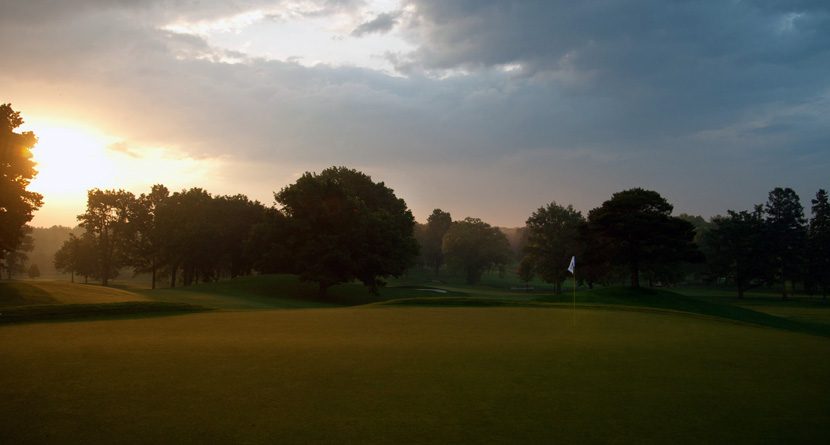 With the playing of the 95th PGA Championship this week at Oak Hill CC’s East Course in the greater Rochester, NY area — much of the attention and emphasis falls upon the players with the likes of Tiger Woods and Phil Mickelson leading the discussion. In the shadows of the event will be the man most responsible for creating the essence of what Oak Hill is today — architect Donald Ross.

In the first half of the 20th century no golf course designer had such a sweeping impact upon golf in America than this Scottish giant. Born in Dornoch, Scotland in 1872 — Ross eventually migrated to America. From his long time adopted perch in Pinehurst, NC, Ross designed or redesigned nearly 400 courses. In a span from 1919 to 1931 — 8 of the 13 US Opens were contested on courses he either designed or redid.

Its been estimated that in 1925 no less than 3,000 men were employed constructing and maintenance of his various designs.

In 2014 — Pinehurst #2 — again hosts not only the men’s Open for a 3rd time — but the Women’s event will be contested the week following the men’s championship. An unprecedented move. #2 was the quintessential signature design for Ross but his handiwork also produced such gems as Seminole in the Palm Beach, FL area,  Oakland Hills / South in greater Detroit area, and Inverness in the Toledo area, to name just a few.

The stature of his design product has been universally praised by the broadest range of course rankings — with Ross being the lead architect in terms of courses cited.

Ross had a major impact for golf design closer to home — splitting time between his home base in Pinehurst and in the Massachusetts area — initially the greater Boston area – when he he first visited America back in 1899.

A carpenter by trade — Ross eventually developed his own golf game at Dornoch. Good enough to play against the best players of his day — Ross played in numerous Open Championships with one top ten finish and no less than four top ten placements in the US Open.

During his budding design career Ross elevated the stature of course architects. His involvement in the Northeast was significant. In the Bay State — Ross was involved with 50 separate projects. Among the more noted courses — Salem Country Club in Peabody — which retains nearly all the elements Ross originally envisioned.

The job at Oak Hill came about because of a membership need to move from a previous site to a new one — 355 total acres of land in the southeast suburb of Pittsford. In May of 1922 Ross came to the club and addressed the membership. Within a year’s time Ross produced a plan calling for the creation of two courses — the East, site of this week’s PGA Championship, was initially 6,538 yards — the sister West Course measured in at 6,503 yards. The issue for many Ross fans is not what Oak Hill East was but what it has become in the years that followed. Various changes have been carried out through the years — originally the changes were suggested to bolster the strength of the course — at other times for better overall crowd movement given the close proximity of several greens and tee areas.

Unfortunately, the series of changes — some carried out by the renowned Robert Trent Jones, Sr, for the 1956 US Open and then years later when George and Tom Fazio were hired only served to inflict a hodge-podge of different results which ultimately compromised a fair bit of the Ross philosophy. Oak Hill / East today is a muscular course heavily treed and imposes ruthless efficiency for those errant off the tee. Whether Ross would have been pleased or not — is hard to say with 100% certainty.

Ross said it best himself in his lone collection of architectural thoughts in the book, “Golf has never failed me.” When asked about his design standards the Scot replied with no hesitation — ” Make each hole present a different problem. So arrange it that every stroke must be made with a full concentration and attention necessary to good golf. Build each hole in such a manner that it wastes none of the ground at any disposal, and take advantage of every possibility I can see.”

So many of the Ross courses still in existence today have done no less.

Related Link: 3 Things To Do in Rochester | PGA Championship Scripting