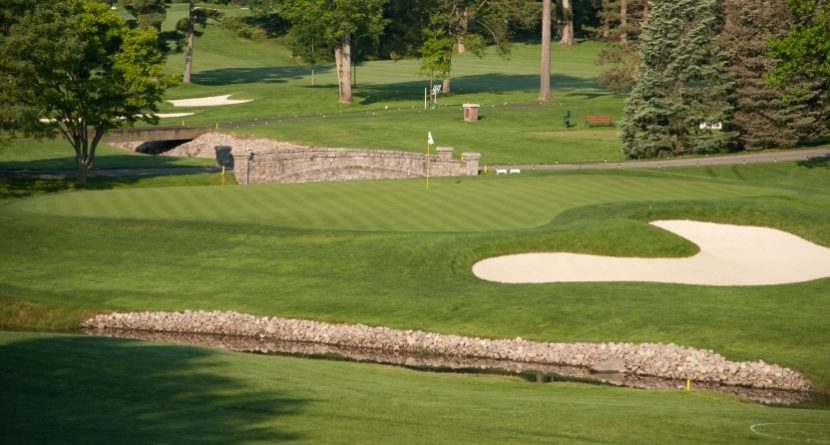 At 8:15 a.m. on June 16, 1989, Doug Weaver reached back with his 7-iron to take the first shot of the U.S. Open’s second round at the 159-yard par-3 sixth hole at Oak Hill Country Club. His shot set off quite possibly the most amazing two hours ever played in golf.

Weaver’s tee shot landed on a slope just past the pin, but the ball spun back ever so perfectly and into the cup. Barely more than an hour later, at 9:25, Mark Wiebe also pulled out a 7-iron, also hit it just past the hole, and also watched his ball roll back into the cup. Less than a half hour later, at 9:50 a.m., Jerry Pate used his 7-iron to roll in a third ace. And in the very next group, at 10:05 a.m., Nick Price delighted a buzzing crowd with another 7-iron into the cup. Four holes-in-one in under two hours.

As there should be, a plaque now sits at the sixth hole’s tee box commemorating the amazing feat. No. 6 may be considered the easiest of the East Course’s 18 holes at Oak Hill, which hosts the PGA Championship this week, but it does demand accuracy. A creek cruises in front of the green and wraps around the left before leaving the back side, meaning any tee shots short, left or long could get wet. One to the right could land in the bunker.

But four aces on the same hole was obviously unprecedented. Prior, the U.S. Open never had more than two holes-in-one in a single round.

That day, Golf Digested estimated the odds of four golfers sinking aces on the same day on the same hole at 332,000 to one. According to the National Hole-in-One Foundation, the odds were far greater at one in 8.75 million.

So that begs the question: What amazing occurrences are more likely to happen than another quadruple hole-in-one day?

However, you are more likely to see four more aces at Oak Hill’s sixth hole this weekend than you are to win Wednesday’s $4.25 million Powerball drawing. Those odds are at one in about 175 million.

Other Hot Links:
– 9 Best Athlete Music Videos
– 3 Things To Do in Rochester
– Who Is Baba Booey and Why Do Golf Fans Yell That Name?