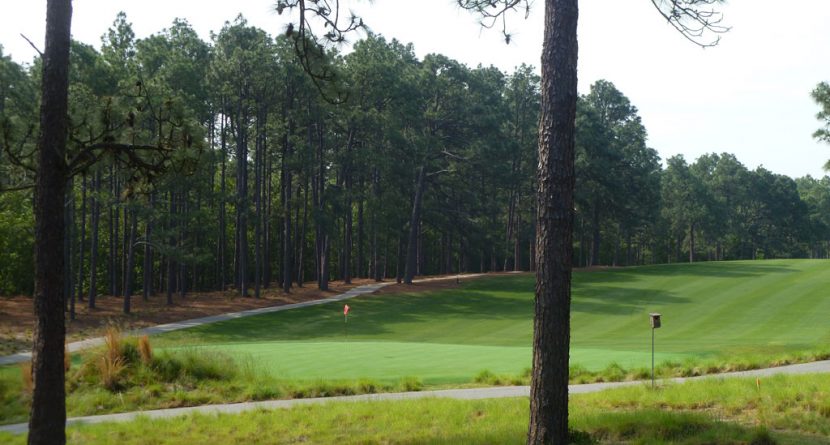 Stepping onto Pine Needles Lodge & Golf Club’s first tee is like stepping back into time.

It’s odd, but you can’t help but feel serene while playing this lovely, fun course, even after realizing at some point it’s subtly beating the crap out of you. Supposedly, Ross’ favorite course to play was Pine Needles, and I have no reason to doubt it. We’re talking classic Ross, and certainly one of his finest works.

The crowned greens feature plenty of slope and false fronts, so while good shots are rewarded mediocre approaches will be repelled. Many of what I thought were good approaches rolled off putting surfaces and I paid the price. For instance, my tee shot at the signature 145-yard third — which requires a carry over a pond and wetlands to a green sloping steeply back to front — tumbled off the back right edge and down the slope, leaving an impossible up and down.

I also bogeyed the 218-yard fifth after another solid tee shot — or so I again mistakenly believed — paused briefly on the green’s crown then rolled off the false front.

Ultimately, I only hit five greens in regulation — including the day’s first two holes and just one on the inward nine — and parred all five, plus three others on which I got up-and-down. On the 10 other holes I chipped well but couldn’t sink any short par-saving putts, finishing 10-over despite feeling I played well.

The 7,015-yard, par-71 layout — which has five tee-box options — has hosted three U.S. Women’s Opens in the last 17 years (1996, 2001 and 2007). Fittingly, Pine Needles has also long been a very female-friendly course thanks to the stewardship of LPGA charter member Peggy Kirk Bell and her husband, “Bullet,” who purchased the course in 1953 and still oversee daily operations at their course and The Lodge, whose rooms and golf shop overlook the first tee.

Pine Needles also offers The Practice Loop, a very cool four-hole practice course with three par 3s and one par 4 that replicate shots you might face during your round, meaning you can maybe spend time fine-tuning your short game. Hey, just a suggestion.