Pinehurst No. 2: Restored Back to its Historic Roots 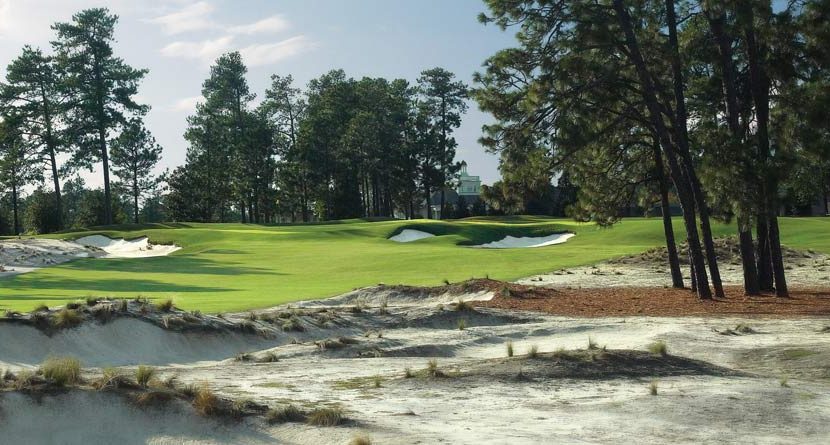 When fans sit down to watch the U.S. Open this week, they may be startled by the look of the course. Pinehurst No. 2 will look burnt out and have a rustic feel, completely different from the Masters at Augusta National. The grass won’t be nearly as green and lush as we’re used to seeing on the PGA Tour, but this is the U.S. Open. And it’s all done on purpose.

Back in 2010, Ben Crenshaw and Bill Coore began working to restore Pinehurst No. 2 to its natural state, when it opened in 1907. The year-long renovation process included changes to every single hole, completely changing the look and feel of the course. Not to mention, it’s sure to play tougher, yet more strategic, than ever before.

The course reopened in May 2011 after renovations costing a total of $2.5 million. Three years later, the world will get a chance to lay its eyes on the new beauty that is Pinehurst No. 2 at the 2014 U.S. Open.

Unlike past years, players won’t have to worry about hitting irons out of four inches of thick rough, and there’s a simple reason for that: There is no rough. Just fairway … and everything else.

The 35 acres of rough were replaced with “natural areas,” which includes sand, wire grass, and pine straw. That’s the “everything else” part. The area that you don’t want to be in.

The fairways were widened by up to 50 percent, giving players better angles into the greens. However, if you miss the fairway, you’ll pay the price. Players shouldn’t expect clean lies outside the fairway and should prepare for their shots to often come to rest in pine straw or waste bunkers.

In addition to removing all the rough, the course was lengthened significantly. From the championship tees, No. 2 now plays at 7,565 yards, nearly 400 yards longer than the 1999 U.S. Open (7,175 yards). It shouldn’t be a problem for big hitters like Bubba Watson and Dustin Johnson, but it will absolutely change players’ approach shots.

With the famous turtleback greens at Pinehurst, it’s ideal to hit high approach shots, landing the ball softly on the putting surface. That’ll be more difficult with the new length of the course, as players will be hitting long irons instead of wedges.

One of the only parts of the course that remained relatively untouched were the greens, a signature feature of Pinehurst No. 2.

The greens look exactly how they sound: turtlebacked. The edges of the greens all slope away from the hole, forcing players to hit the center. Only two greens, 15 and 17, were renovated, simply to increase the size for additional hole locations.

With all the changes made to Pinehurst, the pros seem more excited than ever to take on the historic course.

I love what Crenshaw and Coore have done at Pinehurst @usopengolf. Think we’re in for a great championship #RBCELS pic.twitter.com/yNabs6Av3Z

The myth that a golf course needs to be green to be healthy gets debunked this week. #brownisbeautiful #USOpen #Pinehurst2014 #saveH2O

Solid week @fesjcmemphis. Couple more putts fall it could have been a great week. Excited about the @usopengolf. Love Pinehurst.

Pinehurst No. 2…auto top 5 courses I’ve ever played. Going to be a test though! #USOpen #RBCDeLaet

Pinehurst will give us a U.S. Open unlike any that we’ve seen in recent history. It’s sure to be full of incredible recovery shots from the top players in the world, putting them against one of the toughest (and longest) courses in U.S. Open history.

Sit back and enjoy the show, golf fans. It’s going to be a good one.