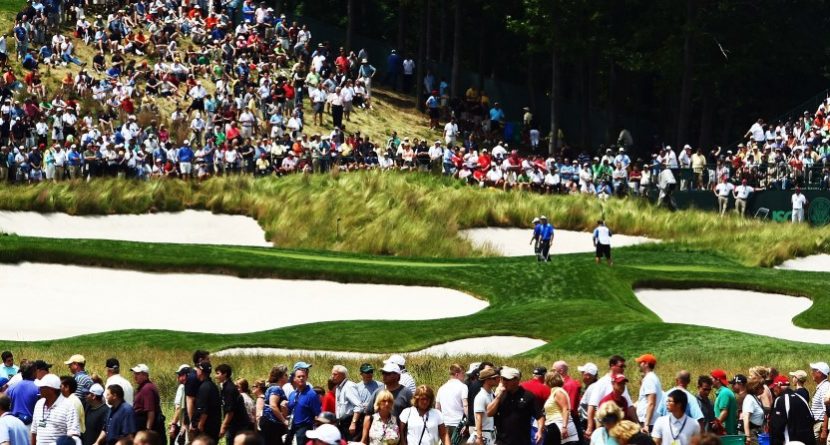 The first public golf course to ever host a U.S. Open, Bethpage Black will soon get the biggest team event in golf. The PGA of America announced Tuesday that the famed Long Island course will host the 2024 Ryder Cup, as well as the 2019 PGA Championship.

Golf tournaments in New York have long been known to be boisterous, and that was no different at this summer’s PGA Championship in Rochester, where Ian Poulter grew a little perturbed of the fans yelling “Baba Booey.”

But the tournament that may have initially lit the fire under vociferous fans was the 2002 U.S. Open at Bethpage, which sits less than an hour up Long Island from New York City. It was nine months after 9/11, and Tiger Woods led from start to finish. The New York Times noted in 2009, right before Bethpage was set to host the 2009 U.S. Open,  that “many golfers still consider (the ’02 U.S. Open) the loudest, rowdiest tournament they have played.”

The ’09 Open was more on the tame side as heavy rains doused the event, and Bethpage got back in the PGA Tour mix with the 2012 Barclays. It’s now in a rotation for that first leg of the FedExCup playoffs, meaning it will again host the Barclays in 2016.

Following that will be the 2019 PGA Championship, which figures to have much of the same feel as this past PGA, won by Jason Dufner. But if there’s one course on which you want to have the crowd on your side, it’s Bethpage. Which makes it perfect for the Ryder Cup.

PGA of America President Ted Bishop got the idea at the 2010 Ryder Cup. He said Rickie Fowler told him, “Can you imagine what a great home field advantage and how intimidating a Bethpage Black Ryder Cup would be?”

We’ll find out in 11 too-long years. Fowler already boasts a legion of fans, and could have millions more as a 35-year-old at the 2024 Ryder Cup.

Related Links: Who is Baba Booey? | Who is Dick Fowler?

Other Hot Links:
– Ahmad Rashad: Tiger and Rory’s Rematch in China
– Win a Trip to Hang Out With Bubba Watson
– Tour Championship: 5 Things You Need to Know