Ryder Cup By The Numbers: More Than 15 Miles of Rope and More 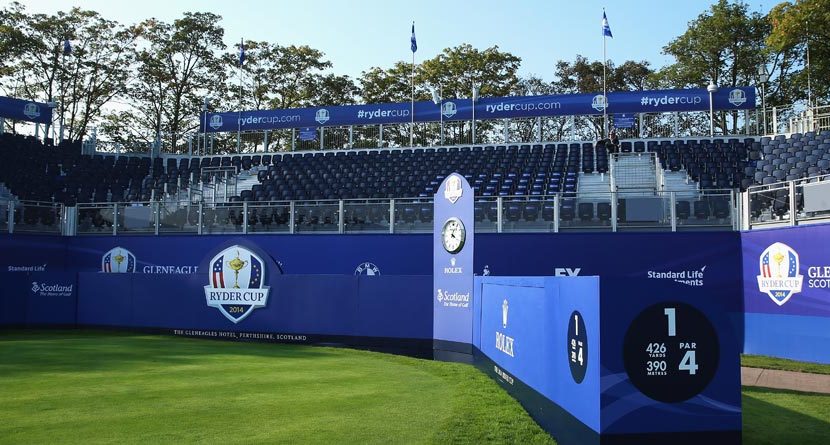 GLENEAGLES, Scotland — Getting into Gleneagles is a feat. We are talking about a magnificent venue serviced by a road network that is designed to carry a handful of cars every week, not the vast numbers who want to see the greatest golf show on earth.

Most spectators are arriving by special coaches – and woe betide those who miss the return journey to their hotel when play is done for the day. There are a further 270 double decker buses running daily from 6:15 a.m. until 9 p.m.

When you get in, an impressive 25 km (or about 15.5 miles) of rope is being used to control you and you your fellow spectators. There are 500 wheelie bins on site and a fleet of litter pickers who will ensure that the place is pristine.

There are also lots of white stakes around the course — 5,250 of them, to be precise. One of the features of the event is the grandstand accommodation. There is a stunning grandstand beside the first tee, where players will be roared on before and after hitting their opening drives. They can take 14,278 people, which is impressive by anybody’s standards.

There are 60 generators producing 11 megawatts of power — that is even more electricity than Ian Poulter generates when he holes a 50-foot putt. And everything is linked together by 9,500 meters of extension cables.

But the stat most people want to know concerns the weather. And the good news is that it should remain dry. The bad news is that dry September weather brings out the midges in vast numbers. What is a midge? It is a tiny flying insect that enjoys the smell and taste of human flesh, and it will get into every body orifice.

They are particularly active near water — and there is plenty of that.

Whatever else you take to Gleneagles, don’t turn up without insect repellant.