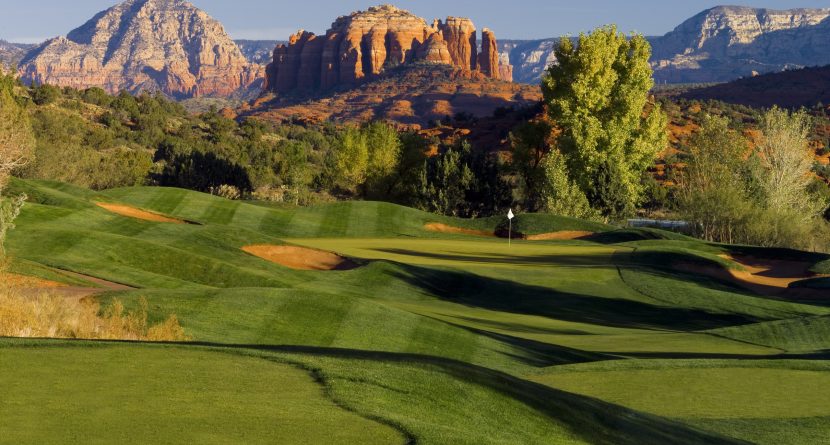 There’s no other way to describe this course, which winds around and through the mind-blowing, red-rocks beauty for which Sedona is famous. Fact is, there might not be a better way to enjoy the region’s jaw-dropping surroundings than spending four or so hours traversing this Gary Panks-designed layout built on rocky terrain as high as 4,260 feet above sea level.

The first time I played the 6,646-yard, par-71 course — I returned three years later — I had a bizarre experience at the large, undulating, boomerang-shaped green shared by the 623-yard fifth and 448-yard eighth holes. I badly pulled my approach on the uphill fifth, one of Arizona’s longest holes, and it rolled down the slope to 10 feet from the left-hand, eighth-hole flag, leaving an impossibly long, undulating, curling birdie putt I almost holed, resulting in a ridiculously lucky par. Some 40 minutes later I birdied the eighth hole by draining my 10-foot putt from the same exact spot my fifth-hole approach finished.

Apparently there’s a reason the region has a worldwide reputation as a metaphysical and spiritual mecca.

The par-37 front nine is, at 3,585 yards, 524 yards longer than the back, which commences with the signature 210-yard 10th, which boasts the course’s preeminent red-rocks panoramic backdrop. I parred the hole twice by yanking both tee shots left, then receiving spirits-aided bounces onto the putting surface.

While the course likely won’t bring low handicappers to their knees (a 70.3/129 course rating/slope from the tips) the risk-reward factor can give even accomplished sticks occasional pause. The 336-yard, downhill closing hole is a potential round-wrecking example.

A decision to attempt driving the green or laying up is necessitated by a large, left-side bunker buffering water starting 80 yards from the green all the way to the putting surface’s back edge, with four small, layup-zone bunkers on the fairway’s right side. My go-for-the green gamble paid dividends twice, with vastly different results. The first time, while simply trying to keep my 75-foot birdie attempt from going long into the pond, I unconsciously drained the putt for eagle. Three years later I planted my drive to within 10 feet and, trying to drain a much easier eagle putt, ripped my attempt 10 feet past the hole for a very disappointing, three-jack par.

Apparently the sprits decided they had worked enough magic for me, but all it took was a final look around while walking off the 18th green to realize plenty of good karma remained.