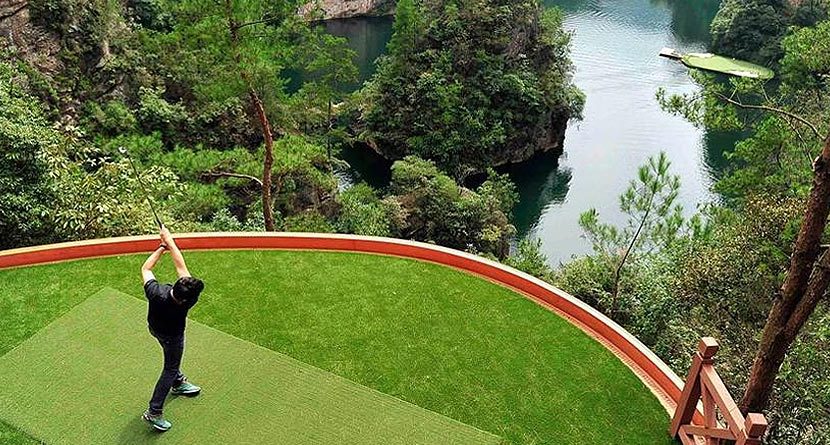 A golf course in Zhangjiajie, China, is offering $1 million to any golfer who can make a hole in one on a specific hole. You’re probably thinking, “So what, I’ve heard that before.”

Well, I can bet you’ve never seen a hole like this: The details of the hole are still unknown, but it looks incredible. And impossible, too.

If I had to guess how far the hole is, I’d say around 247 yards, give or take a few. Based on the fact that the guy in the picture has an iron in hand and the hole is severely downhill, it can’t be much longer than that.

This one gets put in the same category as the Extreme 19th and the 4,500-foot high hole at Cecil Peak. They’re all insane, but which is the most extreme?

Other Hot Links:
– The Most Extreme 1,476 Feet in Golf
– Let Me Take A Selfie: Ryder Cup Stars Join In On Craze– Slice of Bacon: The Ryder Cup Is Upon Us– Show Me The Money: Ryder Cup Has Become Golf’s Biggest Event– Tournament Hole Of The Week: Ryder Cup– Ryder Cup By The Numbers: More Than 15 Miles of Rope and More– Ryder Cup Ticket Prices Soaring On Secondary Market– Phil Snags Wounded Warrior’s Phone, Takes Super Selfie