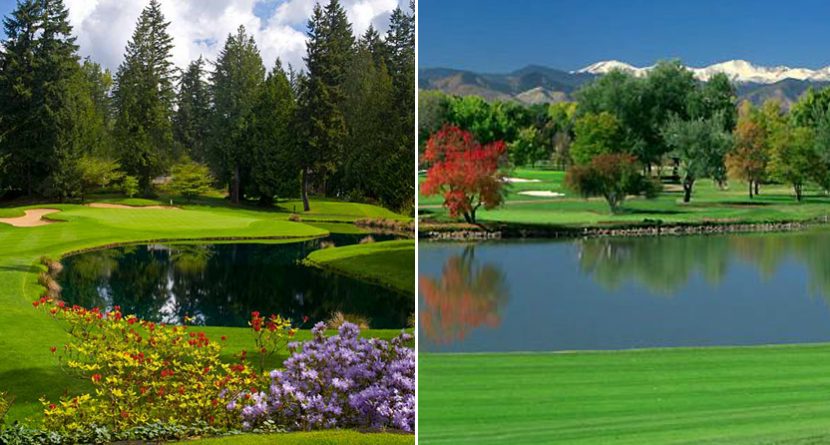 The Super Bowl XLVIII matchup is set. The NFL’s top-ranked defense – Seattle Seahawks – will take on the greatest offense in NFL history – the Denver Broncos. Seattle has an offense and Denver boasts a defense, but that matchup won’t be nearly as fun to watch.

Sahalee Country Club
Less than a 30 minutes’ drive from downtown Seattle sits the Sahalee Country Club, which played host to the 1998 PGA Championship (won by Vijay Singh) and a World Golf Championship event in 2002 (Craig Parry). If you love playing in a forest and can keep your ball in the fairway, this is the course for you. Ranked No. 82 in Golf Digest’s latest ranking of America’s Top 100 Courses, Sahalee is the picturesque Pacific Northwest course you might imagine. Aldarra Golf Club
Fifteen minutes south of Sahalee is the Aldarra Golf Club, which boasts being the only golf course in the state that was designed by the world-renowned Tom Fazio. Zero homes line the course, and it’s not completely engulfed by trees, allowing for views of the Cascade mountain range. Seattle Golf Club
The Seattle Golf Club resides in northwest Seattle, and boasts what Arnold Palmer once described as “one of the most outstanding golf courses in the Northwest, if not the nation.” The club opened in 1900 and moved around a few times before settling in its current location in 1907. Palmer redesigned the course in 1996 to produce a challenging track with narrow fairways and quick greens. That came after it hosted the 1952 U.S. Amateur, ’61 Walker Cup, ’81 U.S. Senior Open, and 2010 Pac-10 Conference Championship. The Country Club at Castle Pines
Thirty minutes south of downtown Denver is Castle Pines, which boasts a Jack Nicklaus-designed course that ranked No. 33 in Golf Digest’s latest rankings. It hosted The International, an annual stop on the PGA Tour from 1986-2006, and sits at 7,000 feet above sea level, offering Rocky Mountain views from everywhere. And the Panorama Bar was recently featured as one of the best 19th holes by Sports Illustrated. This is the course where Peyton Manning sank a hole-in-one last May. Cherry Hills Country Club
Manning may not have aced one at Cherry Hills, but he’s likely played this course too. He might even be a member, as it’s right by his 16,000-square-foot home and he was spotted last summer applying for a job there. Cherry Hills has hosted majors of all kinds (men’s, women’s, seniors, amateurs) and crowned champions such as Arnold Palmer, Jack Nicklaus and Phil Mickelson. The third stop in the FedExCup Playoffs, the BMW Championship, arrives in Denver this September. Colorado Golf Club
Down in Parker, 35 minutes southeast of downtown Denver, is the Colorado Golf Club, which you may have seen from last summer’s Solheim Cup. It’s only been open since 2007, but Travel & Leisure Golf named it one of the top 10 new courses in the world that year, it hosted the Senior PGA Championship in 2010, and later that year was ranked No. 22 in Golfweek’s compilation of best modern courses. Whereas at Castle Pines you feel as if you’re in the mountains, and at Cherry Hills you’re in the city, at Colorado Golf Club you’re navigating a wide-open but rolling course. VERDICT
This one’s almost as close as the Super Bowl figures to be. But Denver gets the edge largely because we’d want to play where the best in the world have played.