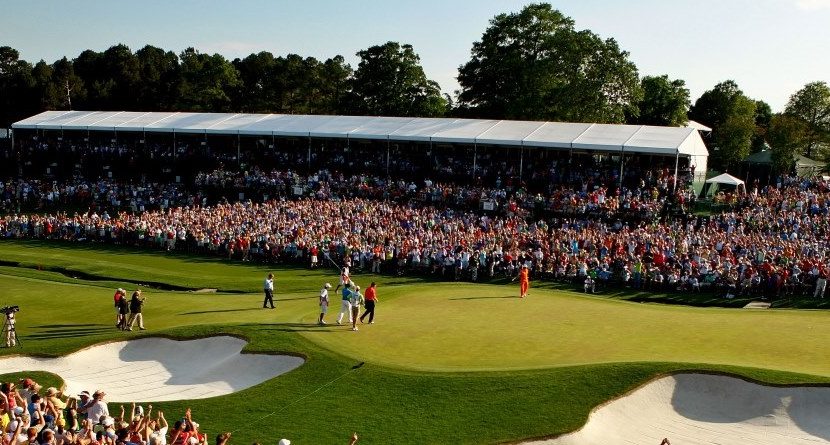 Phil Mickelson returns to the PGA Tour this week for the Wells Fargo Championship, his first appearance since missing the cut at the Masters. And you can be sure he’s intent on not letting the “Green Mile” get the best of him again.

A year ago, Mickelson held a share of the Wells Fargo lead after 54 holes at Quail Hollow in Charlotte, N.C., and still was atop the leaderboard on Sunday when he arrived at the 16th tee box, the start of what one of the toughest finishing stretches in golf has been dubbed the “Green Mile.” He stood at 9-under-par overall, while Derek Ernst and David Lynn sat in the clubhouse at 8-under.

Through the first three rounds of the tournament, Mickelson played Nos. 16, 17 and 18 a respectable 1-over-par. But like he did in the third round, Mickelson bogeyed the 16th, falling back into a tie. When his par putt came up short on 17, he gave up the lead. When his birdie attempt on 18 rolled left of the hole, he officially squandered the tournament.

“I felt like I was in control, and I let it slip away there the last few holes, so it was disappointing,” Mickelson said afterwards.

Ernst, who closed out his round with one of only four birdies at 18 on the day, went on to win the event in a playoff over Lynn.

A three-man playoff decided things at Quail Hollow in 2012. Rickie Fowler played 16, 17 and 18 at even par through the first three rounds of the tournament, but he found himself in both greenside bunkers his final time through 16. He left with a bogey, his first among the back nine that day, then took par on the last two holes to enter the clubhouse at 14-under.

Rory McIlroy and D.A. Points, neither of whom could escape the Green Mile bogey-free either, finished regulation at 14-under as well. In the playoff, the three were sent back down 18, a 478-yard par 4. McIlroy got the most distance out of his drive, but Fowler’s second shot was the highlight of the tournament. With the pin protected in front by a creek, he used a 51-degree wedge to stick it four feet from the hole.

After Points and McIlroy each needed two putts for par, Fowler calmly sank his first for just the fifth birdie of the day on the closing hole. It gave him his first career PGA Tour win.

Said McIlroy, “For Rickie to go out and play that hole the way he did, he deserved to win.”

Guts and great shots are what it takes to win at Quail Hollow, one of the season’s most popular locations. Some of the greatest players in the game have won here – McIlroy in 2010, Tiger Woods in 2007, Jim Furyk in 2006 – but not one has ever captured a second title.

The Green Mile, however, is what sets Quail Hollow apart. A fairway bunker on the 508-yard par-4 16th makes landing tee shots a chore, and the green is regarded as the course’s toughest. Then comes the signature hole at 17, a 221-yard par 3 with a peninsula green. Tee shots have to carry more than 195 yards over water. And at 18, now a 493-yard par 4, drives must be accurate to avoid the bunker on the right and creek on the left, giving you a chance to stick the uphill approach shot near the pin.

All the greens were dug up the week following last year’s Wells Fargo Championship, as Quail Hollow installed a “more heat-tolerant MiniVerde Bermudagrass,” according to Golfweek. The upgrades come in advance of the 2017 PGA Championship, which is set to become Quail Hollow’s first major championship.