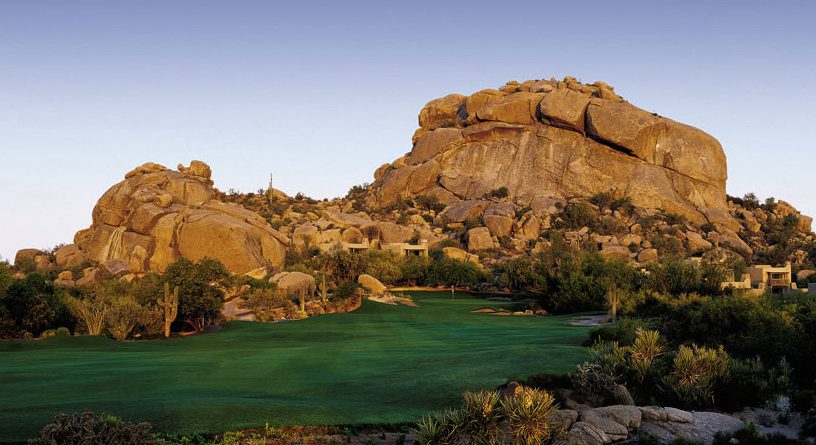 Our directions indicated my wife, Deb, and I had arrived at The Boulders resort. Yet, we both had the simultaneous thought we could have just as easily been Fred and Wilma Flintstone pulling into their neighborhood after a night on the town with the Rubbles.

Yes, The Boulders, a luxurious, much-celebrated property 45 minutes north of downtown Scottsdale in the aptly named town of Carefree, is a dead ringer for Bedrock. In fact, some of the 1994 movie, “The Flintstones,” was actually filmed at the sprawling, 1,300-acre resort, whose two magnificent 18-hole golf courses and Southwest-style, adobe flat-roofed guest casitas, villas and haciendas blend into the high Sonoran Desert’s omnipresent 12-million-year-old granite boulder formations.

While the retreat’s setting is truly a blast from the past, no expense has been spared to make guests feel welcome and comfortable at the unspoiled, secluded Waldorf Astoria resort, which exudes understated elegance.

That includes Jay Morrish’s magnificent North and South golf course designs. The challenging layouts are routed through the wild desert foothills, which Morrish left untouched except for the playing areas. Deb, accompanying me in the cart, couldn’t shoot enough photos of the stunning panoramas, including massive boulders and ancient saguaro cacti, framing the pristine layouts.

The 6,811-yard, par-72 older North course (72.6/137 course rating/slope) features spectacular views of Black Mountain. Don’t be surprised if you spot desert wildlife such as bobcat, desert cottontail rabbits, coyotes or javelina (wild pigs) during your round  — maybe even a rattlesnake if you foolishly venture into the desert areas looking for errant shots.

Our most notable sighting was of an ace. Actually, only Deb and my playing partners, Rich and Larry, saw it. None of his 150 or so strokes during the first 16 holes indicated Rich, who claimed to be playing his first round of golf in 15 years, would make his first career hole-in-one on the 195-yard 17th. I was still squinting into the morning sun trying to locate his 5-wood shot — his first airborne strike of the day — when everyone else screamed the ball had rolled into the hole. I missed it completely.

The 6,726-yard South course (71.9/140) provides a similar experience (minus the ace), but with a par of 71. The surrounding desert beauty is just as vivid, although I feel the South has a slight edge in the eye-candy department as some of its holes are incorporated directly into the huge boulder formations, including two of the resort’s signature rock formations — “Boulder Pile” and “Rosie’s Rock.”

The elevated tee of the 355-yard sixth hole is one such close encounter with the massive stones, where the tee shot must carry 140 yards of the resort’s main driveway and water to reach the fairway. A resort official told me sometime shortly before our visit an unsuspecting guest entering the resort’s nearby registration area was drilled in the butt by a severely shanked tee shot, giving credence to the fact this hole can inflict pain in multiple ways if you miss the fairway.

My round was highlighted by an all-world, impossible par save on the 187-yard seventh hole — where the massive “Rosie’s Rock” balances to the left of the rear tee box — after my power-faded tee shot ended up, I swear, on the patio of our casita, way right of the putting surface. My ball’s impressive room-locating GPS powers were amazing, but not as impressive as our casita.

The place might look like Bedrock from the outside, but The Boulders’ elegantly appointed accommodations’ options are world class on the inside. Interiors feature wood-burning fireplaces, hand-hewn wood-beamed ceilings and overstuffed leather chairs to create a warm, Southwestern ambiance. There is a separate sitting area, huge bathrooms with separate oversized bathtub and shower with natural stone finishes, a 42-inch flat screen HD television with premium cable, high-speed internet access, HDMI technology allowing the connection of personal electronic devices to the TV, an alarm clock with iPod/MP3 connections and a private balcony or patio.

The resort also features seven distinct restaurants and cafes serving outstanding cuisine in casual and formal settings. Palo Verde, located in the Main Lodge, offers delectable Mediterranean-inspired fare for breakfast, lunch and dinner. At the adjacent golf club — where we ate most of our meals — Bogey’s is a popular sports bar restaurant with four 47-inch flat-screen TVs serving casual breakfasts, lunches and dinners while The Grill features a dinner menu specializing in superb steaks and outstanding fresh seafood. We highly recommend all three.

Other off-course amenities include four swimming pools, eight tennis courts, a fitness facility, el Pedregal at The Boulders (featuring four eateries and 10 shops and boutiques) and the Waldorf Astoria Spa, where we partook of an 80-minute couples massage.

I also recommend treating yourself to a 90-minute nightride bike tour. Armed with bikes equipped with halogen lighting systems, tour the resort’s golf cart paths after sunset searching for the property’s vast nocturnal activity. We were informed we might see herds of javelinas, coyotes, rattlesnakes and even an occasional cougar. Unfortunately, all we saw were scads of rabbits and birds, a few bats and one toad. Oh, and a big, clear sky filled with twinkling stars — and I don’t mean Fred, Wilma, Barney and Betty.

The Lowdown: The Boulders Resort