The Dye Course at French Lick 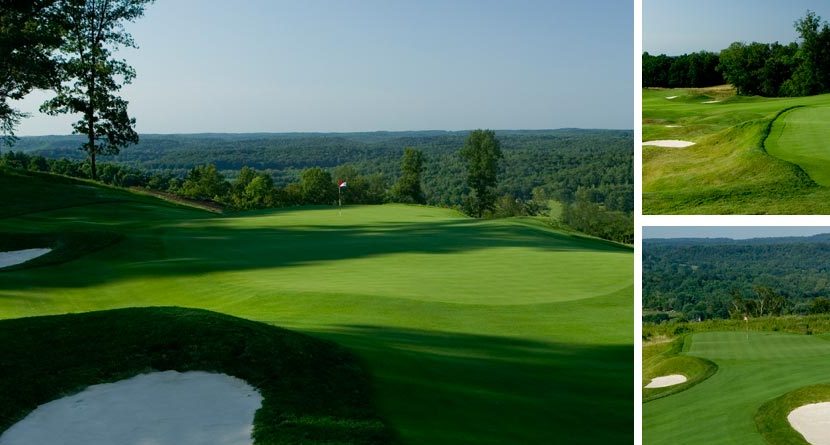 Course architect Pete Dye didn’t reach the pinnacle of his profession by surrendering to challenges.

Sure, Dye carved The Pete Dye Course at French Lick into the hillsides of his native Indiana’s rolling bluffs above and behind the historic French Lick (Ind.) Springs Hotel. However, the resort owners, The Cook Group, actually considered a few other well-known designers before choosing Dye. After walking the proposed site, Mt. Airie, Dye determined the tract’s terrain was too rugged and the slopes too drastic upon which to build a golf course.

After some pondering back home, Dye gathered up an area topographical map and a napkin upon which he sketched preliminary drawings and returned to French Lick, determined to “build the course whether they want me to or not.” The resulting 8,102-yard, par-72 masterpiece — situated at one of Indiana’s highest elevations with stunning, 40-mile panoramic vistas — officially opened in Spring 2009.

To that end, there are five sets of tees on this brute, so if you get battered and bloodied consider it self-inflicted. Think you’ve got game? Well, the rear professional tees come with an 80.0 rating /148 slope. The next three sets of tee markers measure 7,254, 6,701 and 6,115 yards, the latter of which (70.6/130) was strongly recommended by the golf staff as our large media group’s tees. It was a rare great decision on our part to forego the 6,701 markers.

We were all exhausted as we neared the end of our rounds thanks to the pressure of finding fairways and the endless searches for rough-digested shots. And we were riding in carts. Thus it was with much embarrassment, and admiration, that our foursome, while driving off the 15th tee, noticed the then-nearly 83-year-old Dye — carrying his own bag — and his playing partners walking briskly up an adjacent, very uphill fairway.

Apparently it’s just another case of Dye not giving into a tough challenge.

Rates: $350 plus mandatory $30 forecaddie fee, plus gratuity (per person, per round)