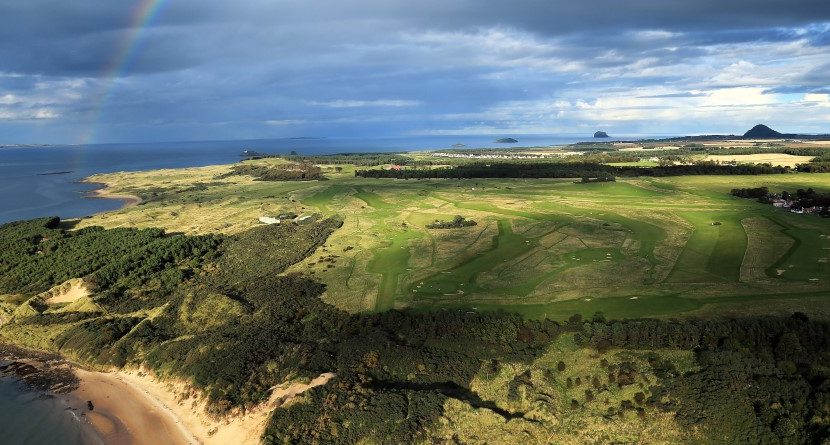 The BBC indulged in a bit of scene-setting ahead of this year’s Open Championship at Muirfield by broadcasting the official film of the 1987 tournament. I happened to catch most of it because I was in the midst of a preparatory routine myself, shuttling delicious tinned foodstuffs and survival equipment from one end of my palatial country residence to the other (when contemplating a 72-hour broadcasting binge, it pays to establish a living room base camp and plan for every eventuality). And it’s as well I did, given the extent to which that slightly grainy highlights reel colored my enjoyment of the HD televisual extravaganza that followed.

1987, of course, was the occasion of (Sir) Nick Faldo’s first major victory, during which he overcame numerous obstacles – including inclement weather, a bowl haircut and a questionable black-turtleneck-lemon-sweater combination – to pip social media’s own Paul Azinger to a place atop the leaderboard.

Faldo’s victory wasn’t just a personal one, a riposte to the wags and armchair critics who’d dubbed him “Nick Foldo” following a series of high-profile collapses in the early Eighties, it was bigger than that. It validated an entire worldview, a golfing philosophy; it guaranteed the apparently simple business of swinging a golf club would never be quite the same again. For the first time, the balance of power favored the appliance of science, or at the very least, a few basic geometrical principles.

A few minutes of that Sunday telecast is more than enough to drive the point home. While Messrs. Azinger, Stewart and Davis are heaping inordinate weight on their powers of hand-eye coordination, praying that rhythm and quick hands can outmaneuver all those idiosyncratic ticks and wobbles, Faldo is implacable and technically perfect. The rhythm is metronomic, the balance flawless and the action eminently capable of moving the ball as easily one way as the other.

This is the swing he’s spent two years building under the exacting supervision of a little-known South African by the name of David Leadbetter. The willowy slide of his apprenticeship has been dismantled and replaced with a solid coiling and uncoiling of the big muscles. It’s a swing that could repeat itself in a gale.

As it turns out, it need only endure a Scottish fog to card 18 consecutive pars – a 66 could not have stated his case more eloquently – and claim that breakthrough Open Championship victory.

Fast forward nearly three decades, and the path Faldo charted to major glory has become something of a bustling thoroughfare; it’s been paved, and hipsters clog its bike lanes.

PGA Tour practice tees are routinely swamped with gurus and would-be scientists, each preaching a unique line in physiology, neuroscience and corporate management-speak; no drill or prop is too outlandish (except maybe the Golf Swing Shirt); and anxious self-reproach has become the default setting of serious golfers everywhere.

Technology has played a part in all this, of course; this monomaniacal fixation on technique would hardly have had the space to the grow had it not been for the development of a ball that doesn’t curve in the air and clubs that don’t register all but the most calamitous mis-hits. But it started with Faldo, and it entered the mainstream at Muirfield.

It was with no shortage of amusement, then, that I watched events unfold in that familiar corner of the Edinburgh hinterland. By a trick of weather and some libertarian course management, the same venue that had once conspired to offer a tantalizing glimpse of golf’s future had been rendered a baked and running tribute to a long-forgotten past.

Yardage books and stock shots went out the window. To most of the field, it must have felt as if the laws of physics themselves were imploding.

The level of discomfort felt by the massed ranks of white-belted millionaires was reflected in the sheer volume of complaints, great volleys of them, lobbed in the direction of the R&A. Some even emanated from those who coped most impressively with the conditions. Phil Mickelson, who by Sunday afternoon had cracked Muirfield’s code, followed his opening round by claiming, erroneously, that a third of the greens were dead. Ian Poulter, later to grasp a share of the final podium placing, suggested the 18th green could benefit from the addition of a clown face and windmill.

This, however, was links golf as it was meant to be played in the summer months. Seaside courses, built on that inimitable sandy turf, are finely tuned sporting ecosystems. The nature of their challenge shifts with the seasons, and their defenses are always more natural than plotted or graphed. Lush conditions reign when the elements are at their most extreme, and periods of benign weather give way to hard fairways and unforgiving putting surfaces. For every change in the weather, the course makes an equal and opposite compensation. It’s beautifully simple.

Last week, Muirfield responded to an environmental extreme – a three-week spell of hot weather – by placing a weight of emphasis on shot-making and imagination. And it succeeded in being punitive without ever being proscriptive. Yardage books were rendered useless, it’s true; but the golfing imagination was given free reign. Of a major championship venue, it’s surely unreasonable to demand anything more.

The Honourable Company of Edinburgh Golfers might not be anything to shout about, but its playground has an uncanny knack of identifying great champions. Els, Faldo, Trevino, Watson, Nicklaus, Player, Hagen, Vardon, Braid and now Mickelson: each has lifted the Claret Jug at least once in Gullane. Forever nudging history this way or that, its challenge unblunted by the passage of time, Muirfield has legitimate claim to being one of the game’s few timeless venues.

In 1987, it helped announce to the world a new method of playing tournament golf. This year, Muirfield served as a timely reminder that, for all golf’s recent changes, all the attempts to develop a science capable of mastering the golf swing, the essence of the game remains simple and largely beyond the reach of textbooks.

It’s about getting the ball in the hole.

Related Link: Tiger and Nike: A Look Back | Dammit Tiger, Curse Away!

Other Hot Links:
– Cheyenne Woods Enjoys British Media Tour
– Your Next SUV Could be a Bentley
– What Has Tiger Seeing Red on Sundays?