The Real Origins of Pinehurst 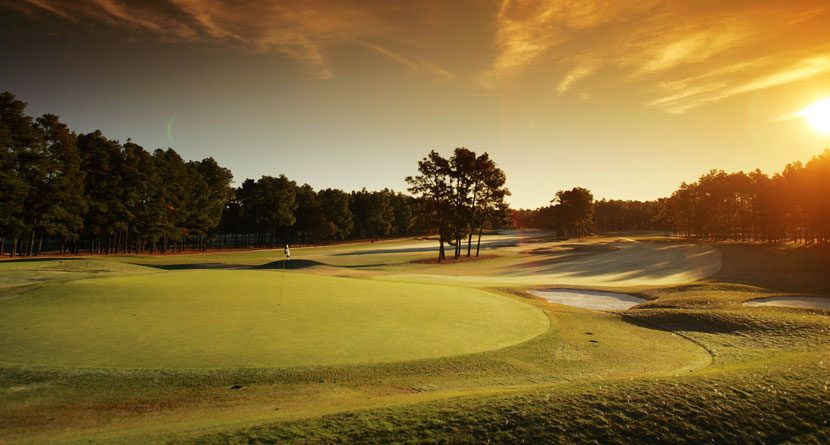 The Pinehurst narrative began with James W. Tufts, a pharmacist and philanthropic non-golfer from Boston. Tufts became interested in funding a winter resort in an effort to mitigate the negative effects he associated with living in industrial America. He wanted to give New Englanders an opportunity to recuperate from respiratory problems, chest ailments and the difficulties of urbanization based on “corporate capitalism.” Thus, seasonal resorts would become an enduring method of coping with modernization.

In 1895, Tufts purchased 5,000 sandy and agriculturally worthless acres in the remote Sandhills of North Carolina at the price of $1 an acre. In early November of 1900, at the beginning of the winter season, the resort alerted potential visitors that Pinehurst’s gentle winter climate and well-kept golf courses “afford ideal conditions for indulging in this fascinating game.” Despite this claim, Tufts knew nothing of golf.

Before Pinehurst’s third season, he allowed his son Leonard, a novice of the game, and Dr. Leroy Culver, an “expert” from New York City, to lay out a primitive nine-hole course on 60 acres of land located within easy walking distance of the village green. During the summer of 1899, Tufts built a simple clubhouse to accommodate players and spectators, and hired a golf professional from Scotland, John Dunn Tucker, to manage the golf course and facilities.

In early April 1901, Pinehurst held its first annual golf tournament, the United South and North Championship. Sixteen men and 14 women competed, and George Dutton of Boston won the men’s title and Harry G. Parker of Philadelphia won first place in the women’s event. Over the years, the South and North Amateur Championship has been won by players ranging from Francis Ouimet to Jack Nicklaus to Corey Pavin.

As more golfers congregated at Pinehurst, first James Tufts, and then his son Leonard and grandson Richard, increasingly catered to the golfers’ tastes to create an ideal resort. In the summer of 1900, Tufts hired a new Scottish professional, Donald J. Ross, to rebuild the existing course and to lay out a second “championship” course, beginning with nine holes.

Between 1901 and 1919, Ross used a mule and a drag pan system to build Pinehurst No. 1, No. 2, No. 3 and No. 4. Ross would spend the remainder of his life helping the Tufts family carefully craft a reputation for Pinehurst as the winter haven for American golfers. In October of 1903, at his office in Boston, Leonard Tufts, his brother-in-law Harry B. Emery, and Donald Ross, officially organized the Pinehurst Golf Club. Their stated purpose was “the promotion and advancement of the game of golf and the maintenance of the links at Pinehurst.” Ross became a homeowner in Pinehurst, as did many of the golf club’s regular members.

In turn, Pinehurst was recognized as an outstanding golf resort and a sanctuary rather than a competitive venue. Just after James Tufts’ death, a group of men and women – many who became local property owners and Pinehurst’s most devoted commuters – began contesting Leonard Tufts’ escalating emphasis on nationally promoted tournaments. In 1904, they formed their own private club, calling themselves the “Tin Whistles.” One rather irreverent section of the by-laws read: “It shall be the duty of each member to suppress the incipient conceit of any fellow member who thinks he is in line for the North and South Championship.” With good-humored self-righteousness, Charter member Edgar A. Guest articulated the members’ philosophy of golf in a poem, “To the Pinehurst Tin Whistles.” Guest and his fellow Tin Whistles believed that only men like themselves – wealthy, white, Christian gentlemen – could truly understand and appreciate the game of golf.

According to the club narrative, Pinehurst No. 2, “the centerpiece of Pinehurst Resort,” has served as the site of more single golf championships than any course in America. The first major Pinehurst hosted was the 1936 PGA Championship, which Dennis Shute won (3 & 2) in a 36-hole final match with Jimmy Thomson. However, the breakthrough came with the 1999 U.S. Open. When remembering this Open, deeply resonant images come to mind – a long 15 foot par putt at the 18th green, Payne Stewart thrusting his fist in the air, the cheering throng around the 18th green at Pinehurst No. 2, a cry. In a stunning conclusion to the most dramatic U.S. Open of the decade, Payne became the first player in the 99-year history of the U.S. Open to win on the 72nd hole with a substantial putt. He was also the only player to finish under par, closing with a 70 to defeat Phil Mickelson by one stroke.

In 2014, Pinehurst No. 2 will make history again, becoming the first to serve as host to the U.S. Open and U.S. Women’s Open Championships in consecutive weeks.