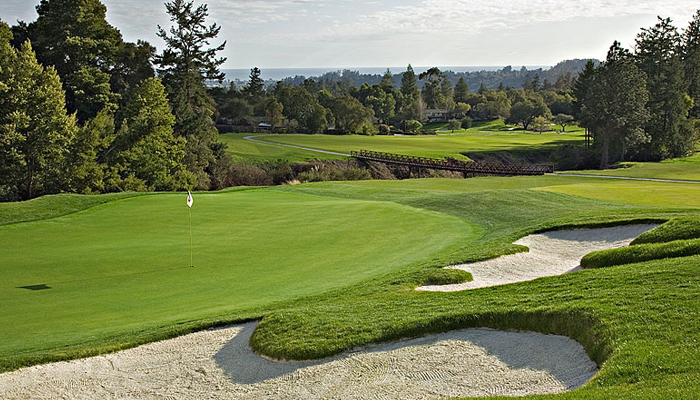 Santa Cruz’s Pasatiempo is the rarest of birds – an Alister Mackenzie design that the public can actually play.

Spanish for “pastime” or “hobby” and known simply as “Pasa” to her friends – a round here is like reuniting with an old friend. Mackenzie’s home sits to the left of the sixth fairway and generations of golfers have posed for photo ops to pay homage to his memory.

The man who designed both Augusta National and Cypress Point built precious few public designs in America. Most of Mackenzie’s work is not only private, but extremely difficult to access. Even at the few public courses he did design, much of his work has been erased by modern designers trying out their own ideas over Mackenzie’s canvas – signing the Mona Lisa with a spray can and calling it art, so to speak.  (People frequently cite Jack Nicklaus’s wholesale changes to The Ohio State University’s Scarlet Course, which Mackenzie designed with his associate Perry Maxwell as, perhaps, one of the most egregious examples of this.)

Pasa, however, is as close to Mackenzie’s original vision as it’s ever been thanks to a Tom Doak restoration. “Our mission statement at Pasatiempo was to restore the features of the golf course to the way they were on opening day in 1929 and not make any other changes,” said Doak. “We put the bunkers back the way they were supposed to be based on the aerial photographs we had.”

As a result, the course is much tougher, as well as more beautiful. Where some players might land in one or two bunkers per round, they could hit eight or nine at Pasa if their swing is off or they are planning their shots poorly. Why? Because the ball keeps moving after it lands at Pasa, and players have to carefully read the ground contours to see what the ball will do after it lands.

The bunkers are now larger and deeper. Some are deep-but-narrow trenches, all but impossible to escape, while others are gaping caverns, deep and steep. With fast and firm conditions and cunning undulations that sometimes direct the ball into the hazard, it’s easy to see that the bunkers are back and they bite hard.

Moreover, the green pads have been enlarged back to their original sizes, bringing in even more dramatic contours and shaping. Every hole is not only strategic, but the majestic sweep of the holes gives the entire experience a grand feel. As such, fans are universally praising the restoration work.

“The restoration is a success beyond all our expectations,” said Californian William Nathan, an ardent golfer and PGA Tour fan. “You have to think your way around the course. It’s like a golf puzzle and I’ve never seen it look so beautiful in all the year’s I’ve played it.”

Two of Pasatiempo’s most iconic holes provide an excellent illustration of exactly how good Doak’s work is. At the par-4 16th, the greenside bunker is much deeper and extends further out into the fairway. One of the toughest holes in the world, the approach was already frightening because of the enormity of the false front, which even causes poorly struck putts to run off the front of the green. A shot from the bunker stands almost no chance of getting to a back or left pin.

At the par-3 18th hole, arguably one of the greatest par-3 finishers in golf, the trench bunker that now guards the entire left side is a wasteland from which you’ll be lucky to have either a stance or a swing. The green has a rhinoceros buried under it, so play your putt about ten feet right to left, even if you are pin high.

You’ll find two of the best back-to-back holes in all of golf in 10 and 11. Brutishly long par 4s, the left bunker on 10 is a public version of the 10th at Augusta National in size and grandeur. The tee shot over the chasm is thrilling and the approach must be played well right of the flag to filter close to the hole. At 11, the approach over the arroyo to the plateau green atop the hill is made tougher still by the trench bunker on the left and pronounced contours on the right that filter balls away from the green.

Pasatiempo is brilliant, but not the only outstanding restoration work for which his team is renowned. He has restored some of golf’s most fabled courses like Garden City, North Shore, Chicago Golf Club, San Francisco Golf Club and Royal Melbourne. In doing so, he has recreated the work of Alister Mackenzie, A.W. Tillinghast and C.B. Macdonald – a nice crowd to run with.

Doak and his team have also built several of the world’s finest and most famous golf courses, including four world Top 100 designs in Pacific Dunes, Barnbougle Dunes, Cape Kidnappers and Ballyneal.

In high season, a round at Pasa can get expensive, but deals can be found later in the day and during shoulder seasons. Whatever you pay, it’s worth it to play a public-access Mackenzie lovingly restored to perfection, to see Mackenzie’s home, and to take in the fragrant air of Northern California. It’s a once-in-a-lifetime round for a public golfer on a national treasure of a golf course.

There’s plenty to do after your round as well. Santa Cruz is still a vibrant hippie Mecca where even the Mexican restaurants play Janis Joplin. Catch Jackson Browne, James Taylor, or any of the other great artists who regularly play acoustic shows at the famous Catalyst Rock Club, take in the Shakespeare festival at U.C. Santa Cruz, or ride the famous wooden rollercoaster.