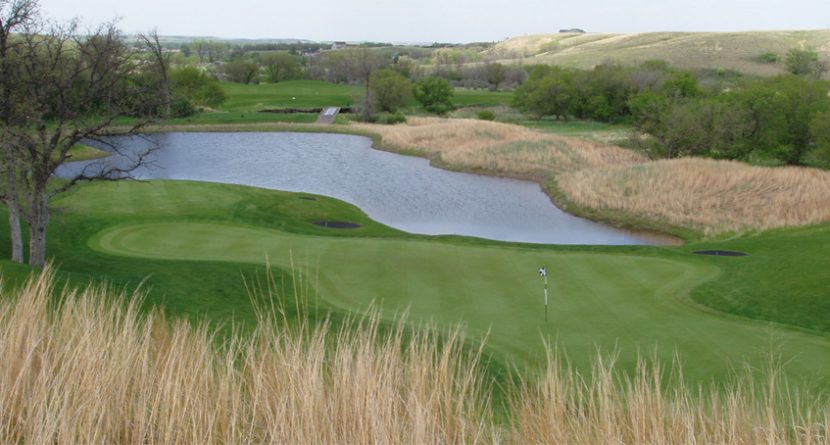 Adventure golf has become the vacation du jour for ardent players recently, with private clubs and public courses opening in far-flung places like the sand hills of Nebraska, the southern Oregon clifftops, and Nova Scotia.

Now we can add North Dakota to the list, as a three-course public golf trail has opened – Hawltree Golf Club, Bully Pulpit and Links of North Dakota – each featuring the work of three different prominent architects, each being within two hours of the other located in an idyllic natural setting and all featuring excellent strategic designs. Two of the courses won “Best New Course Awards,” Hawktree in 2000 and Bully Pulpit in 2005.

Moreover, North Dakota is no more remote for travel than Texas for most Americans, just turn north at Chicago instead of south. With greens fees averaging around $55, ardent golfers are taking advantage of one of the best golf values in America. Boasting affordable world-class golf, a pristine natural setting and plenty to do and see off the course, you can proudly suggest a family golf vacation there and not have your wife concuss you with a 7-wood. North Dakota – it’s just east Montana or south Saskatchewan any more.

Jim Engh grew up in North Dakota, riding in his dad’s lap on the tractor around the golf course, so golf design is in his blood. Hawktree was, therefore, a homecoming for Engh.

“It was nice to come home and close the circle,” explained Engh.

Primordial versions of Engh’s trademark design features are all on display at Hawktree, including the steeply sidewalled muscle bunkers (where the walls resemble a flexed bicep), sun-burst bunkers (which wrap around water hazards and resemble star shapes) and bowl-shaped greens which kick some errant shots back into play, a feature amateurs and older golfers love.

“It’s forgiving, and we like that because we always get a chance to recover,” said one North Dakota resident.  “It’s really player friendly. It’s also a beautiful course.”

To add to the natural setting and in a nod to the area’s mining roots, Engh filled the bunkers with black slag instead of sand. Almost a silt, the slag actually has a smoother, lighter consistency, so you should never catch one heavy.

While the par 5s are all show-stoppers, the best hole on the course may be the long par-4 N0. 12, a dogleg-right ending at a green benched into the prairie with an endless view of the valley beyond.  Although it was only Engh’s second solo design, it catapulted him to prominence, and over the next few years he won several more top awards.

Two hours west of Bismarck lies Medora, a historic old town straight out of a John Wayne movie or a Teddy Roosevelt hunting diary. Bison roam the highways, striated canyons line the countryside and memorabilia from the area’s Old West history are available everywhere. Hollywood even uses the area for film shoots.

Bully Pulpit is the favorite son of the three Dakota trail courses, as most golfers find it the prettiest. The course is really two different terrains in one: the meadow and prairie holes of the front nine and the Badlands and canyon holes of the back nine. The front is a nature walk through the prairie with your golf clubs. The terrain is flat, but plays along pastoral streams and in the shadow of a great ridge. The back looks like a fantasy golf calendar with greens clinging to precipices, fairways shoe-horned in between steep drop-offs and scenic elevated tees overlooking the entire valley. While the front nine was flat, the fairways on the back are frequently canted from one side to the other, so you’ll see many more uneven lies.

Hurdzan is a minimalist designer, which means he moves as little earth as possible to build the course, but he is also a master of strategic design, so diagonal or center-line hazards make the golfer think their way around carefully.

Miss the turn for Links of North Dakota, and you’ll be coming back from Canada — it’s that close.  It’s just over a two-hour drive north from Medora to reach the far northwest corner of the state, where the golf course lays along the dunes atop the bluffs above a gorgeous corner of Lake Sakakawea.  It’s 28 miles to the nearest town, and the landscape seems as remote and primal as when Lewis and Clark walked there with the lake’s Native American namesake exactly 200 years ago.

Architect Stephen Kay had to feel a little like the expedition duo when he arrived at the site. “It was as pure and unspoiled a place as I’d ever seen in my life,” he recalls. “A student taking my course at Rutgers found the site, he and some of his friends. It looked like Ireland with all the hummocks. The soil was perfect, there were no rocks, and it’s on the water: just unbelievable.”

Indeed, everything about the project was an astounding confluence of luck. After several refusals initially, the owner of the land finally relented only upon learning it was for a golf course, sold the property $76,000 – under $200 per acre.

“Can you believe it?” asked Kay. “For lakefront property! It was a dream come true for everyone involved and a bit of Heaven I love to visit time and again.”

Moving only 7,000 cubic yards of earth, Kay built the course for $300,000. Moreover, with excellent green contours and inspired use of the land, Kay shows how an outstanding course embraces the character-filled undulations rather than flattening them and removing all interest. Just like the great seaside courses of the U.K. and Ireland, Links of North Dakota has three primary defenses: the blustering west and northwest winds, the severe green contours and the undulating fairways which frequently present uneven lies. Also like U.K. courses, wind makes a mockery of the yardage everywhere, especially on the par 3s, all of which test distance control as a result.

The course is also colloquially referred to as “Red Mike” after an accused cattle and horse rustler. According to local legend and the book “The Wonder of Williams” (as in Williams County, where the course is located), a group of vigilantes sought to rid the region of thieves. While out on one of their purges, they came across Mike camping in the wilderness.

The vigilantes tied Mike to a chair in the middle of what now is the golf course and lit a fire underneath him. They demanded he tell them the location of other thieves and their cache of rustled animals. Mike turned red while the fire burned but provided no information. They had to release him. Ever since, the area has been known as Red Mike Hill.