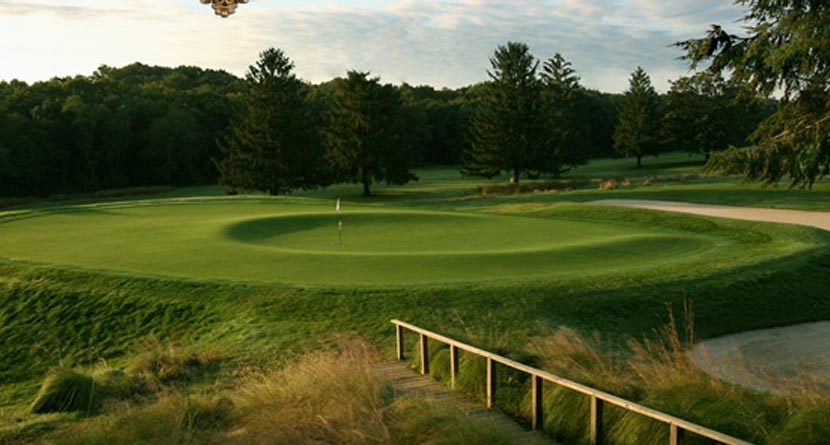 MONROE TOWNSHIP, N.J. – With its impeccable architectural pedigree, the Banks Course at Forsgate Country Club makes a strong case from inclusion in any discussion of the best courses in New Jersey, perhaps even the entire eastern seaboard.

As the last course completed by architect Charles “Steamshovel” Banks – the protégé of Seth Raynor, a young lawyer who was the associate and later successor to C. B. Macdonald – Forsgate showcases many of the great, classic, strategic holes found in that venerable ancestry, which includes National Golf Links of America as its progenitor.

Here’s a look at Forsgate’s version of some of the legendary template holes Madonald, Raynor, and Banks made famous at places like National Golf Links of America, Chicago Golf Club, Mid-Ocean, Yale and Fishers Island.

One of two centerpieces of the round, the Biarritz at Forsgate features a green an entire 100 yards in length with a swale 12 feet wide and eight feet deep. The back portion of the green even contains the classic Golden Age “horseshoe” ridge shape around the likely back hole location.  Even the old-school, wing-shaped strip bunkering is present, running along the outside of the fairway and green.

Stretching back to a behemoth 272 yards for the pros and playing 210 for the members Brad Faxon quipped, “It’s a tough little par-4,” before losing 1 Down to Annika Sorenstam in a 2011 charity match.

“Short” is actually a proper name for a type of golf hole. It describes a par 3 under 150 yards in length mostly encircled (and certainly fronted) by a hazard, usually sand, and which also must contain a deep “thumbprint” in the green resulting in distinct and difficult tiers to the putting surface.

At Forsgate the 12th green is circular and the depression results in another perfect horseshoe shape here as well as at 17. The maintenance staff at Forsgate must be commended for their impeccable mowing and conditioning of these features, which are museum piece examples of these hole templates.

All carry at just under 200 yards, the pronounced kickplate left of the green caroms golf balls right and towards the back in a reverse of the original (and more commonplace) version of the Redan hole. The design of the hole intends that the golfer use the ground to filter the ball to the desired hole location; you’re not intended to fly the ball straight to the hole.

“It hearkens back to courses in the U.K. where you can play ‘one bounce and on,'” architect Stephen Kay, who oversaw the restoration.  “It’s also nice to see greens that slope to one side or the other, or greens that have a lot of internal contour, not just flat, boring greens tilted a little back to front. The classic designers like Banks made you think before hitting a golf shot.”

Miss short and right here and you face a bunker shot over a 10-12 foot lip. In fact, that’s a theme all day long:  miss on the wrong side and face a pitch or bunker shot from as far as 20 feet below the hole.

At 470 yards it’s one of the longest and toughest holes on the course, made harder still by a green with three distinct tiers with sharp drop off and a severe pitch right to left.

Forsgate’s Punchbowl is unusual because the green sits in the surrounds of bowl-shaped amphitheatre but is not, itself, bowl-shaped, as in the more classic example of this template hole. The hole also features an excellent architectural defense called “reverse camber,” where the hole turns in one direction, but the land flows in the other.

San Francisco’s Olympic Club (Lake Course) uses this design feature to great effect and is the great secret of the course’s resistance to scoring even by the World’s greatest touring pros. At Forsgate the hole turns left, but everything runs to the right.

Long indeed, at 580 yards it’s a brute: three long shots ending at a green perched precariously at the edge of a 20-foot cliff.  And, yes, there is a bunker down there as well. The green again has two distinct tiers, so two-putts are never a given.

Originally designed in 1931, the Banks Course has been polished to a high shine by celebrated golf architect and historian Stephen Kay. Moreover, Forsgate’s owner, Chris Schiavone, understands that the first duty of a golf course owner – especially the owner of a course with such a sterling architectural and historical bloodline – is preservation, stewardship and restraint.