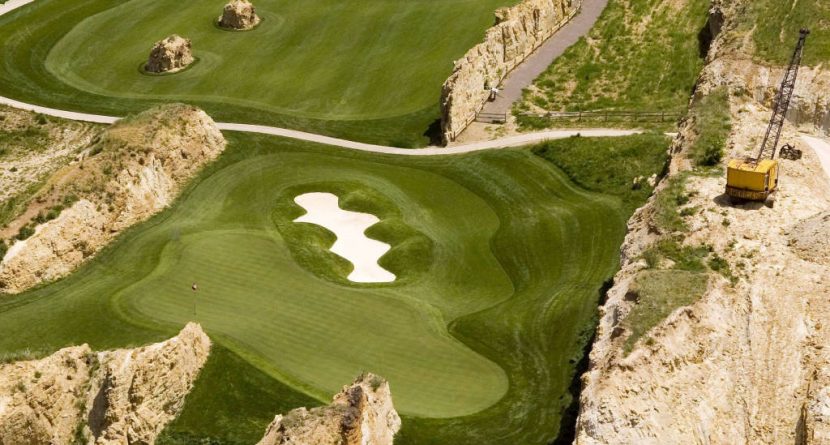 Here’s something you don’t see every day: golf and dinosaurs!

Golf architect Jim Engh’s Fossil Trace Golf Club in Golden, Colo., is routed around 64-million-year-old dinosaur fossils preserved in clay and sandstone, including Triceratops and Hadrasaur (a relative of the Velociraptor). “Fossil Trace easily had the most trade-offs and environmental restrictions of all the sites I’ve worked on,” Engh said. “Between wetlands and the archaeological treasures, it took twelve years from the start of the project until opening day.”

Because Golden acquired formerly private land, the property became subject to new and significant layers of environmental and historical protection, many more than were applicable when it was a privately owned clay mine. Scientists and educators were deeply concerned about preserving and protecting the fossils and initially opposed the building of the golf course. Thankfully, Engh – like every truly great golf architect – believes that protection and preservation of the land’s terrain and character is the first duty. He knew he could build a terrific golf course and protect the fossils as well. Working in an atmosphere of transparency and respect, Engh turned his opponents into his allies, earning their trust and assisting them in setting up a University of Denver program studying the fossils. Indeed, while preserving the fossils is the greatest achievement at Fossil Trace, designing a routing of 18 holes, not only around the dig, but the tricky topography of the rest of the site, is a close second. The entire course is shoehorned into a mere 130-140 acres within the Golden city limits and Rocky Mountain front range with four completely different environments. “It’s four sites in one because we had the fossils and the clay mine, (holes 11-15), we had the wetlands for the opening five holes, the open prairie, (holes 6-9), and the low pond areas for the rest of the course,” Engh said. “We also kept the chimney of the old incinerator on the property in the middle of the first fairway.” He even had to clean up large amounts of ceramic fly-ash byproduct that had been left on the site during mining operations.”We piled it up and put the 12th tee on top of it,” Engh recalled. “Then we kept all the equipment we found there like cranes and mining gear there as well.”

Believing that undulation is the unsung soul of the game, Engh designed greens and fairways which rebound approach shots back into play, sometimes even onto the green and closer to hole locations. With five par 5s and five par 3s, Engh provides more variety in the playing experience. He’s used that routing philosophy at many of his other courses, including Pradera, Red Hawk Ridge and Lakota Canyon Ranch. “The holes in the mine are my favorites,” Engh says. “That part of the land presented so many unique features to incorporate into the experience.” The indelible, indeed iconic memory of Fossil Trace is the mighty par-5 12th, where the fairway is peppered with sandstone monuments, while the walls of fossils line the left side of the fairway and rear of the green. And yes, the towers do impact play, so you must plan your way around them carefully. Although he moved about 400,000 cubic yards of earth, Engh still made the course flow naturally with the landscape. In fact, it won second place for best new public course in 2003 from “Golf Digest,” and deservedly so. At 6,500 feet above sea level, the 6,400-plus yards play shorter, but still present plenty of challenges.