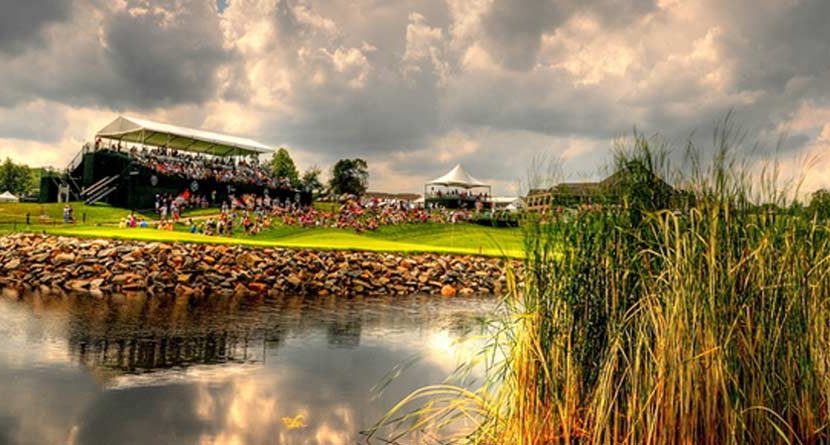 You know you’ve got a great girlfriend when she turns to you and says, “I want to play a Pete Dye course!” That’s what my new girl did yesterday evening as she perused the yardage books and scorecards on my nightstand, and it made my day.

But once I got over the elation of learning that my girl has serious golf street cred, I thought, where do I take her?

Sawgrass is wonderful, but too hard for a beginner; she’ll have no fun hitting the ball I the water all day.

PGA West is scenic, but it’s even harder on beginners than Sawgrass, and temperatures are broiling even in shoulder seasons. People are starting their hydration regimen now for their fall tee times.

And Whistling Straits and Kiawah Island are a little off the beaten track for a day trip or weekend getaway.

But this trio would be perfect.

Though the two Fazio designs (the “Wanamaker” and the “Ryder”) get more play and more ink, the eponymously named Dye course is easily the best public course in south Florida and one of the top four public layouts in the state. It has a true links feel with heaving fairway undulations, curvaceous green contours, an out and back routing, and no trees, so the wind whips all across the golf course. You can and should play the ground game, especially around the greens.

Happily, the course is far less penal than Dye’s resort designs and major championship venues. There is a watery stretch at Nos. 4-6, (a Cape hole, a long par 5 with water all along the right and a vaguely Redan-ish par 3, also over water and sand), but for most of the day it’s not the hazards that get you, it’s the green complexes and their devilish undulations, hollows, and hummocks.

“It’s not a guillotine like Sawgrass which can chop your head off at any moment. At Port St. Lucie you bleed from 1,000 cuts, especially if you don’t have a good short game,” explained golf design expert Jon Kulok. “But because it really makes you think all the way around, you want to play it over and over again. We play 36 a day there, we like it so much.”

Actually most golfers do play 36 a day, even in off seasons. It’s an easy walk and with fewer players opting to play it, you can get around in 3:15.

While the par 5s are the centerpieces of the golf course, especially the reachable 17th (an unusual routing quirk for Dye), which plays through a vast dunescape of bunkers, the strongest part of the course may be the back-to-back long par 4s at 14 and 15, one featuring a heaving set of dunes in front of the green, the other featuring a windswept tabletop green overlooking both holes.

Aberdeen may seem like the middle of nowhere, but actually Bulle Rock is convenient to Philadelphia, Baltimore, Washington, D.C., even Atlantic City, making it a good choice for a getaway weekend. Though a public daily-fee facility with no resort or hotel attached, it hosted the LPGA Championship from 2005-2009. Moreover, the conditioning is first-rate.

“Bulle Rock is as Pete Dye as Pete Dye gets,” explains Yahoo! Sports radio personality Steve Czaban. “At Bulle Rock, you’ll see things he did at Sawgrass, Blackwolf Run, Barefoot Landing and other courses as well.”

Czaban then chose the same hole your author did as an example – the par-3 12th, a hole Dye has reproduced several times. While water guards the entire right side, curving like a scimitar, the left side of the green is guarded by a deep pot bunker. Fearing the water, golfers often end up in the bunker and have to play their shot out towards the water they were trying to avoid in the first place.

The hole is a perfect example of how Dye gets in your head with his arresting, often frightening visuals. Several other fairways sweep around deep hazards, offering diagonal angles of attack, tempting you to take the aggressive line, but increasing penal the further off line the ball strays. Still other holes keep the golfer off balance with their alternating shot requirements, a feature Dye used with greatest effect at Sawgrass. If the hole calls for a draw off the tee, you’ll have to hit a fade into the green, not only keeping the player from finding a repeating swing, a groove he can get into all day, but also testing the golfers skill at handling many types of shots.

Dye is a Hoosier through and through, Indiana born and bred. Moreover, one of Dye’s early golf architect mentors was Indiana golf course designer Bill Diddel, who designed the original 27 holes at the facility, which hosted a PGA Tour stop in the 1960s. (In those days there was actually an entire loop of nine holes within the oval, reachable by walking over a wooden bridge above the track, hence the name “Brickyard Crossing.”)

No less a personage than fellow Hoosier and well respected golf writer Chris Clouser calls Brickyard, “the best and most famous public course in the state,” and the quintessential example of “Midwest Americana.” He notes that the course is “not merely manufactured on the entertainment provided” (i.e. just trading off the fame of the Indy 500), but has many architectural nuances typical of Dye’s work.

The course features an out-and-back routing, playing within the oval for holes 7-10, before turning back home to the clubhouse. It has Dye’s typical severe greenside contouring and pronounced green undulations. The Speedway itself is actually a hazard on holes 12 and 13 as the fairways run close to it and wayward balls can and will clatter amid the grandstands. The course also showcases Dye’s trademark stadium mounding, comfortable natural amphitheaters for the spectators. While the most famous hole is the difficult par-3 7th hole, another Dye modified-Redan, Little Eagle creek is the prominent natural feature and winds strategically around the last four holes, sometimes crossing the fairway in dangerous places, sometimes hugging one side, but at all times waiting to sink scores.