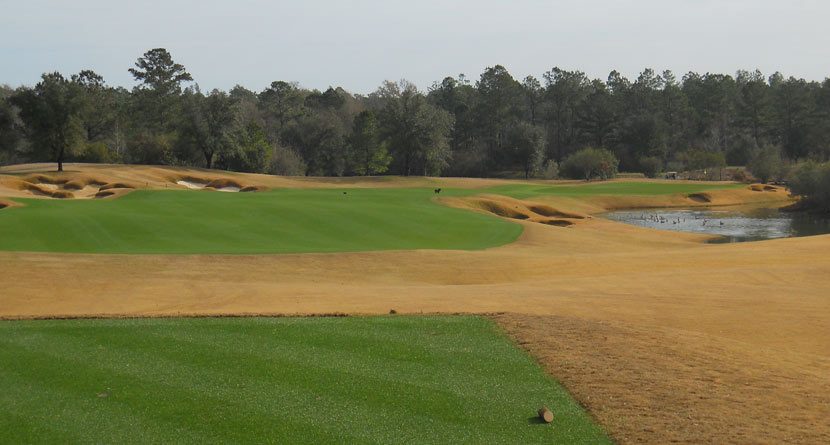 Certainly the players will luxuriate at a five-star resort, the Beau Rivage, rightly famous as the quintessence of charm and Old World courtesy. Yet the par-71, 7,054-yard Tom Fazio golf course has been even more accommodating, as winning scores in the tournament’s three-year history have all exceeded double-digits under par for 54 holes.

Fallen Oak can be divided into three sections: the difficult start of 1-5, the more benign scoring stretch of 6-15, and the difficult finish from 16-18. The players should open and close the round playing into the teeth of the prevailing wind which makes those already watery holes tougher still. The chief defense to the golf course is the deep, penal bunkering, made tougher still by steep, above-grade faces and shaggy collar of rough around their perimeter. Fairway bunkers are especially fearsome, often allowing only a short-iron or wedge out rather than an opportunity to reach the green.

Still, the middle of the round will provide birdie opportunities. The short, downhill seventh hole, clocks in at only 315 yards, but has a relatively easy green which will feed balls to back and right hole locations. Though it will yield many birdies, eagle will be unlikely since most golfers eschew trying to drive the green. Laying up to the left side for the fairway to just under 100 yards results in a green light shot at the flag from a perfect angle. Moreover, the entrance way to the green narrows and with water lurking all along the right, one mistake will mean double bogey, so most players will take that out of the equation in lieu of having an easy pitch. Perhaps tournament officials will move the tee forward one or two days to the 290-yard box and increase both the temptation for the golfer and the drama for the spectator.

Players will also have several birdie opportunities on the back including both par 5s, (13 and 15, where they will have wedges in their hands for their third shots), but also at the short par-4 12th and par-3 14th. No. 12 is a drive and a pitch, albeit to a small, wildly contoured green guarded by a vicious pit bull of a pot bunker. (It might also be a fascinating choice for a drivable par-4 if tournament officials moved the tees up a box or two.) At just 150 yards, the 14th features a large bowl, “the hole in one location,” as Fallen Oak caddie Big Tex put it, so it’s one of the most exciting places for spectators to congregate.

“There’s always plenty of excitement there,” confided Tex, with a knowing smile.

Additionally, whether the players will face a feisty fiery red-head or a demure permed brunette of a golf course will also depend on the fickle Gulf Coast winds and weather.

“Fallen Oak usually has a south to north prevailing wind during tournament week, which means the toughest par-4s like 2, 5, and 18 will play into the wind,” explained golf architecture expert Bruce Moulton. “But when it shifts, it blows out of the southwest, and that means those holes will play in a crosswind, making them much, much tougher.”

The closing two holes at Fallen Oak are among the toughest. The par-3 17th, which can stretch as long as 240 yards, is all carry over a ravine and slightly uphill to a green with severe internal contours. The mighty 18th, which can play as long as 493 yards has water guarding the entire right side of the hole. Such “half-par” holes are, happily, the source of much excitement in golf, and Fallen Oak, with its wide variety of both difficult holes and birdie opportunities should make for mercurial streaks up the leaderboard and sudden drops right back down.

Players will have to go low to win here, there’s no scraping by with pars and hoping the other players fall away. The three previous winners, David Eger, Tom Lehman, and Fred Couples won with three-day totals of 11-under, 16-under, and 14-under respectively. So we will see numerous rounds in the 60s and, undoubtedly, the winner will have to make a gallant charge on Sunday.

“It’s not just a terrific golf course, but a really great tournament venue,” concluded Moulton. “There’s plenty of excitement and everybody has a great time at the Beau Rivage. It makes for a great golf holiday.”

Fallen Oak is also one of the best arboretums in golf, with an excellent collection of indigenous flora including holly, magnolias, azaleas, wax myrtles, cedars, loblolly pine and cypress.