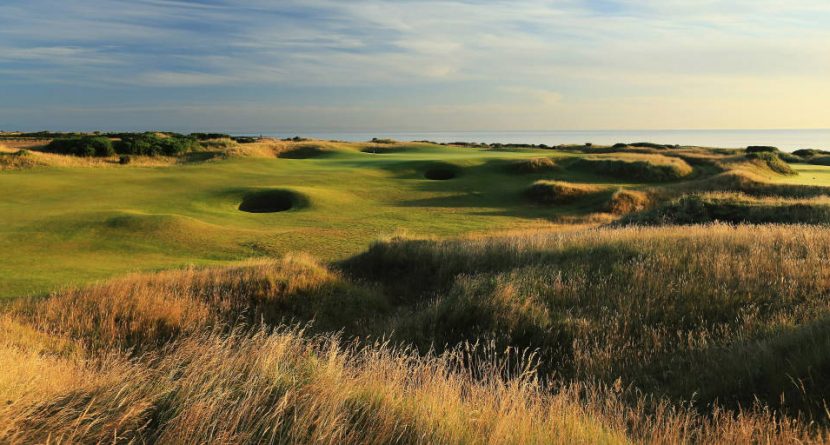 As the old rock ‘n’ roll song says, nothing is sacred when your back is turned.

R&A chief executive Peter Dawson announced two weeks ago that there would be major changes to the Old Course at St. Andrews, changes he believes will make it more competitive for the pros when the 2015 Open Championship is contested.

The info drop occurred on Friday of Thanksgiving weekend, when the fewest possible people would notice, with bulldozers set to begin earthmoving the following Monday, allowing no time for any opposition to organize.

Opponents say the changes homogenize the layout and run counter to its strategic design tenets, essentially “dumbing down” the golf course.

Despite their protestations, the Old Course is headed for a partial, but significant, modernization at the hands of U.K. architect Martin Hawtree, a Dawson favorite, but also a polarizing figure in golf design circles for his allegedly lackluster prior efforts at Rota course renovations as well as his association with Donald Trump at the golf-crazy tycoon’s new course in Aberdeen.

What is in Hawtree’s plan?

Specifically, they will actually enlarge the Road Bunker on the 17th hole on the right-hand side and re-contour a small portion of the front of the green so that a larger number of errant shots may roll into the bunker. However, enlarging the bunker also makes escaping it that much easier, since the Road Bunker’s small size and steep slopes combine for its chief defense.

New bunkers are planned for the third and ninth fairways, while greenside bunkers at Nos. 2 and 4 will be repositioned closer to the edges of the greens.

And in one of the most controversial changes, the back left of the 11th green – the famous Eden Hole, which has been copied all over the world – will be lowered to create more pin placements. Experts agree that changes to the course on this scale have not been undertaken since John Low oversaw a re-bunkering project over the opening nine holes from 1905-1908.

The golf architecture world has responded with shock and alarm. The most organized response has been from preeminent architect Tom Doak, designer of some of the world’s greatest courses and arguably the finest mind in the craft, who was aghast when he heard the news.

“I was horrified to read of the changes proposed to the Old Course at St Andrews,” said Doak in a letter he has sent to the presidents of the Australian, American and European societies of golf course architects, as well as the Scottish regional administrator of the British and International Golf Greenkeepers Association.

“I don’t believe it should be impossible to change the Old Course, or any other historic course. But I think it should be a lot harder than it currently is, where only the management of the club and any consulting architect they hire have to agree….I think that the default position should be that such an international treasure should be guarded, and that there should be a high burden of proof that changes need to be made, before they can be made.”

Doak said it is still unclear whether anyone except a few people on the St. Andrews Links Trust and the R&A championship committee were allowed to comment on the proposed changes at all.

Several supporters of the changes have weighed in on Doak, however, suggesting his lack of work with the game’s largest bodies renders his opinion a lesser one.

“I am not the ‘go-to guy’ for the pro tours, because I object to the idea of changing great golf courses just to cover for the governing bodies’ incompetence at regulating equipment, and they all know it,” wrote Doak. “They would rather work with architects who are somewhat afraid of them, and who covet the status of being consultant to a famous course, because that makes it less likely the architect will stick out his neck to argue with them about the right thing to do.”

Other golf architecture aficionados have stuck out their necks, condemning the speed at which work will proceed after the announcement and the lack of transparency of the entire process, saying essentially that such furtiveness was no way to run any golf course, let alone the Home of Golf, and certainly no way to preserve the sacred trust inherent in this unique and historic custodial relationship.

Pre-eminent architect Bob Jones, Jr. agrees. In an interview, Jones said, “The Old Course is sacred ground, the Vatican of our game. Although no one knows who designed it, it has evolved over the centuries and so there are many ancient rites and rights pertaining to it. It’s owned by the community and the Links Trust. My hope is that (these changes are) not a diversion of this.”

Proponents of the changes cite that issue as the reason for the changes. Several holes at St. Andrews play more than a half-stroke below par, practically defenseless on windless days.

“It’s become a pitch and putt for the pros,” said one prominent architect who spoke on condition of anonymity. “It needs something.”

Architect Pete Dye suggested capitulation to distance and technology earlier in the year.

“Why don’t you let us drive all the par 4s?” he asked rhetorically.

Supporters of the changes also point to a longstanding history to modernize Rota courses all the way back to 1900. Even St. Andrews was made more difficult by Old Tom Morris himself. Old Tom didn’t like it when the course was too easy. When someone got out of Hell Bunker with a fairway wood, he dug it larger and deeper so no one would ever do it again.

The proposed changes this time around, however, seem to change the strategic nature of the holes, reducing playing options rather than increasing them. Many critics rightfully scream “heresy.”

In their eyes, proponents can claim precedent if they like but, to purists, once a door is opened, someone needs to shut it before it’s too late.